Pokemon Plushies: The Cutest, The Cuddliest and The Most Collectable 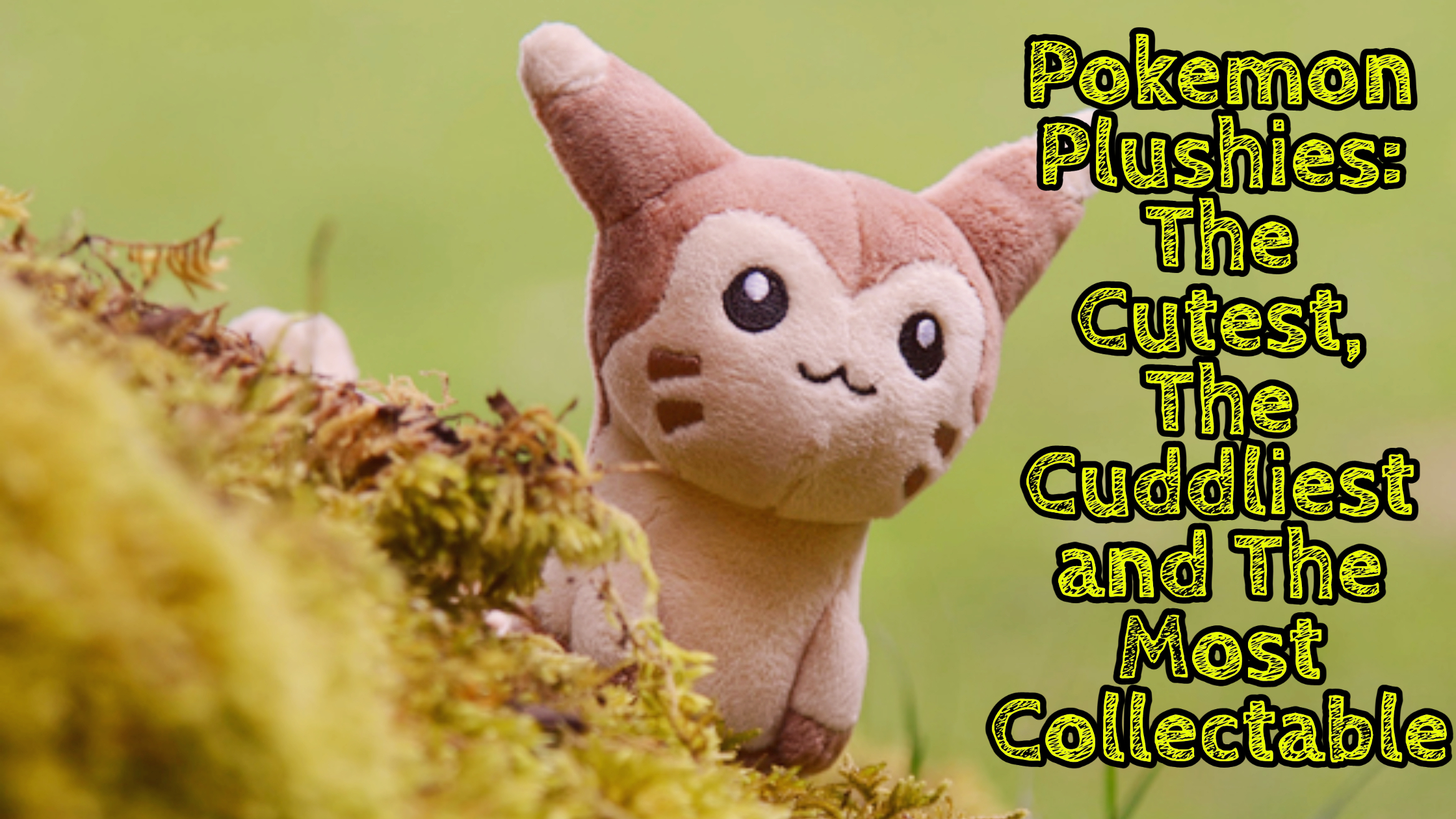 Pokemon Plushies: The Cutest, The Cuddliest and The Most Collectable

Plushies, soft toys, teddies, dolls. These cuddly toys are known by a variety of different names but everyone can agree that they’re cute, collectable and a perfect product for the Pokemon franchise to feature their characters in. With so many Pokemon in existence now it would probably be quite difficult to list every single Pokemon plushie that has been produced, so in this article I will be having a look at a selection of the most notable and adorable Pokemon plushie lines that have found their way into the collections of Pokefans throughout different periods of the franchise.

One of the most extensive plush toy lines of the first three Pokemon generations was the Hasbro Bean-Filled Plush line that ran between 1999-2005. These toys proved to be extremely popular possibly due to not only the hype around the Pokemon franchise at the time but also the immense popularity of Ty’s Beanie Baby toys during the 90s, as the bean-filled Pokemon plushies were quite similar to Beanie Babies not just in the materials used in their production but also in size. As the Pokemon craze spread across the world, the Pokemon Bean-Filled Plush toys became sought after not just by Pokemon fans but also by Beanie Baby collectors.

This toy line released plushies for the first 3 generations of Pokemon, the Pokemon from each generation (Kanto, Johto and Hoenn) produced in plush form were:

In 1998 Kentucky Fried Chicken restaurants across the United States of America took part in a large promotion where a selection of free Pokemon toys (including card games, tattoos and water squirters, amongst other toys) were included in kid’s meals. As well as the kid’s meal toys, a small set of Pokemon plush toys were also available to purchase from the restaurants. The Pokemon included in the purchasable plush line were Vulpix, Dratini, Zubat and Seel.

One of the longest running plush toy lines in the Pokemon franchise is the Bandai Friends toy line that ran from 1997 to 2008, The Bandai Friends line featured numerous different sets, some of which were in conjunction with various parts of the history of the Pokemon anime, such as the animated Pikachu shorts that were played before the second and third Pokemon movies, Pokemon 4ever, the Pokemon Advanced series, Destiny Deoxys, Lucario And The Mystery Of Mew and the Pokemon Diamond & Pearl series.

The Bandai Friends came packaged in individual boxes such as the one above and the early plushies notably feature Ken Sugimori’s original artwork on their packaging. They were notable for having a more hand-made look than other Pokemon plushies, being made of felt and fleece with plastic eyes, with each plush being 3-4 inches tall. 19 different sets of toys were released altogether, the characters released in each of the sets released between 1997 to 2008 were as follows:

Set 13 (Inspired by Legendary Pokemon from the first 4 movies and the first and only set to feature a human character, Ash Ketchum) – 2001:

Advanced Generation Set 4 (Inspired by Lucario And The Mystery Of Mew) – 2005:

In the early 2000’s Spanish toy company Play by Play produced and distributed a series of Pokemon plush toys. The Play by Play plushies were noticeably larger than the majority of other Pokemon soft toys at the time and were primarily sold as prizes to be won at fairs, theme parks and arcades.

These plushies are also quite infamous for not always being the most accurate depictions of the particular Pokemon character they are meant to represent, however rather than receiving derision from the fan base because of this, many collectors have found their somewhat unusual appearance to be quite endearing and a number of the Play by Play plushies have become fan favourites, in particular the very popular Pikachu model (also known as Chubbychu, Fat Pikachu and Chunkychu) that emphasised certain aspects of Pikachu’s original design, which was much more robust than the Pikachu design commonly seen on Pokemon products today.

A variety of different Pokemon featured in the original anime were produced as plush toys by Play by Play, although perhaps due to the nature in which they were sold at amusement parks as opposed to a traditional retail setting, there is very little photo evidence for some of the rarer Play by Play plushies. The full list (that is known) of Pokemon character plushies created and sold by Play by Play is as thus:

Pokedolls have come in many different iterations and are noticeably different in appearance to many other Pokemon plushies, being presented in a Chibi (Chibi being a japanese term for characters drawn in an over-exaggerated small/cute fashion, with short limbs and large heads) style not used in other licensed Pokemon toys. They are also notable for being inspired by the in-game item, the Pokedoll, which made its first appearance in the Generation I character Copycat/Mimic Girl’s house in Saffron City and has since appeared numerous times in the main series games and also as a Trainer card in the Pokemon Trading Card Game. The first iteration of Pokedolls were released under the name PlushPlush and were initially only available to purchase through Japanese Pokemon Center retail outlets before being rebranded as Pokedolls in 2002.

Since then however, many Pokedolls (though not all as some remain exclusive to the Japanese market) have become available to purchase in other stores across the world, such as the Nintendo World Store in New York (which was formerly the Pokemon Centre New York), pop-up Pokemon Centre kiosks that have appeared in various shopping malls across the USA and in the pop-up Pokemon Centre London which temporarily opened in the UK in 2019. Pokedolls released in the UK were marketed under the name Pokemon Mini Plush and were generally relatively small in size, though the size of Pokedolls can be quite variable overall, with standard models being around 6 inches alongside many variations, such as the Mini Pokedolls, Oversized Pokedolls and DX (Deluxe) Pokedolls.

Over the course of the Pokemon franchise there have been a wide range of electronic Pokemon plushies released by several different companies. The features of each of these can vary from model to model though the majority of them feature some type of sound and/or light effects. One of the most popular electronic plush lines during the first three Pokemon Generations was the range produced and released by Hasbro from 1999 to 2004. The initial line of plush toys was quite concise consisting of just 3 characters, with electronic plushies of Pikachu, Mew and Togepi being released in November 1999. They were extremely popular (particularly the Pikachu electronic plush) and sales of these cute interactive toys helped the Pokemon franchise as a whole (alongside the games, cards and other Pokemon toys) top the TRA Top Ten list of the biggest selling toys for Christmas 1999.

Hasbro sought to repeat their success with the release of two new electronic plushies in 2001, Marill and Pichu. They also re-released their most successful electronic plush, the electronic Pikachu in 2004, with some changes made to Pikachu’s design and packaging to fit the new Pokemon: Advanced anime series and merchandise line, however due to some decline in the profitability of Pokemon merchandise during this period of the franchise this re-released electronic Pikachu did not enjoy the same sales success as its predecessor.

Alongside the 1999 Hasbro electronic plushies, Tiger Electronics (a subsidiary of Hasbro) also produced smaller plush toys of Pikachu and Togepi that were attached to keychains and made a variety of sounds (Tiger Electronics also produced a number of non-plush electronic Pokemon keyring toys). As well as this, in 2000 they also released an 11 inch electronic Psyduck plush which would make sounds and shake when activated, a toy which occasionally functioned a little too well and would sometimes scare the children it belonged to by setting off unannounced (though perhaps due to this unpredictability the Tiger Electronics Psyduck toy could be considered to be the most in keeping with the Pokemon anime’s portrayal of Psyduck).

From 2007 to 2011 Jakks Pacific released a number of different electronic plushies featuring Pokemon from the Generation IV and V games (Diamond, Pearl, Platinum, Black, White, Black Version 2 and White Version 2). One of the most notable lines from this period was the Diamond & Pearl Electronic Plush set which featured the second stage evolutions of the starter Pokemon from the Diamond & Pearl games, Croagunk, Monferno and Prinplup. Considering second stage evolutions tend to be rather overlooked when it comes to merchandising it was a first for the franchise to have all three second stage starter evolutions sold not only as a plush set, but one that could be interacted with via a variety of sound features.

In 2016 Tomy released a new interactive electronic Pikachu plushie under the name My Friend Pikachu. Some of its features were similar to the Hasbro electronic Pikachu that had been a hit 17 years earlier, with the toy speaking Pikachu’s signature “Pika Pika!” catchphrase and having light up cheeks, however My Friend Pikachu’s design was noticeably different to the vintage Hasbro model as the head was much larger and round but the body was significantly slimmer, mirroring the design changes Pikachu had undergone since the release of the original electronic plush. My Friend Pikachu also had the new (and admittedly, very cute) feature of being able to wiggle its ears which when combined with its light up cheeks and vocal output made for quite an expressive and engaging toy. Although this new version of the electronic Pikachu plush still didn’t make quite as big of an impact as the old Hasbro electronic plush had during the height of the Pokemania craze, it was one of the signifying products that marked the resurgence of the Pokemon franchise in the mainstream media, as with 2016’s Pokemon Go being a huge global success once again stores began stocking more and more Pokemon merchandise in order to keep up with the new-found demand, a resurgence which has continued following the success of Pokemon: Detective Pikachu, new main series games for the Nintendo Switch and renewed interest in the Pokemon Trading Card Game.

Continuing with the modern resurgence in Pokemon’s overall popularity, one of the most loved and collectible Pokemon plushie collections in recent years has been the Build-A-Bear Workshop Pokemon Collection. Beginning in December 2015, the collection includes a variety of different Pokemon characters that can be dressed in a range of different Pokemon-themed clothing. Each Pokemon Build-A-Bear toy also comes with their own Build-A-Bear branded Pokemon TCG card.

So Are Pokemon Plushies Still Cute, Cuddly and Collectable?

Yes, yes and yes. If there was ever a franchise that was perfectly suitable to have its characters made into plush form, Pokemon has to be it. The older and rarer plushies are not only fun for collectors to find, they also bring back lots of memories for many and the new plushies succeed in not only encouraging newer and younger Pokemon fans to start collecting, but also in providing lots of fun and friendship along the way, which is what every good soft toy, Pokemon or not, should do. As I mentioned earlier, this article only covers a fraction of both the vintage and newer Pokemon plushies available, the plushie market is one of the most expansive parts of the world of Pokemon merchandise and there is plenty of fun to be had in tracking down your favourite characters, so if you’re thinking about starting your own collection, there’s no better time than now!