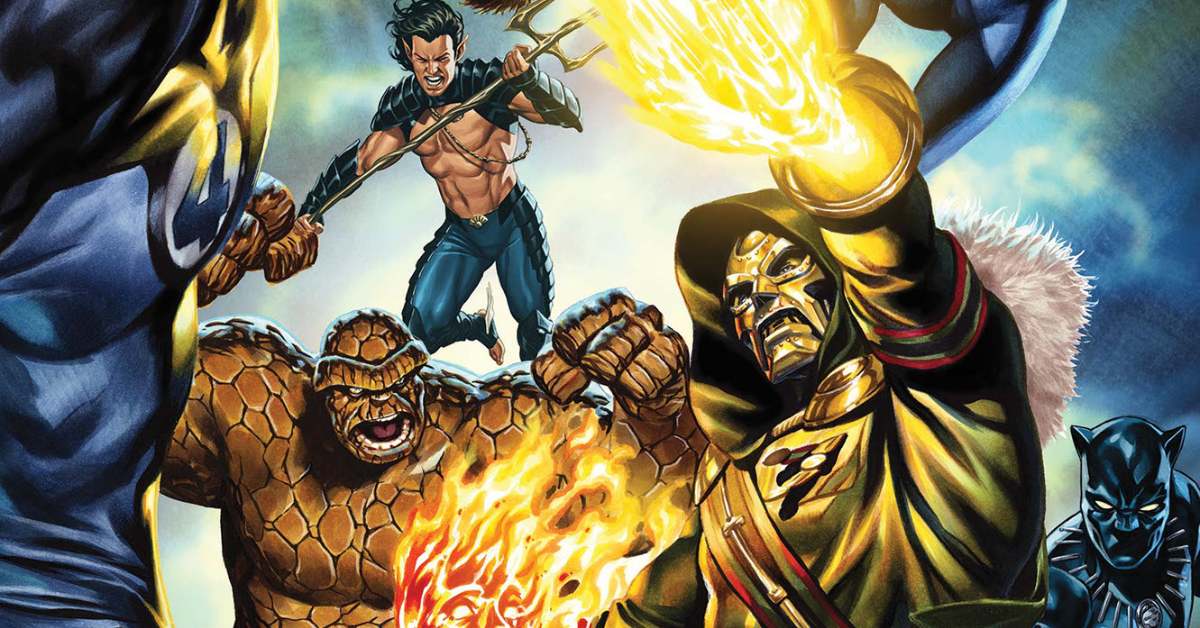 Fantastic Four #34, written by Dan Slott with art by R.B. Silva ends the Bride of Doom storyline with the Four and friends trying to get out of Doctor Doom’s wedding reception with their lives.

Cards on the table, I haven’t read much Fantastic Four before and starting at the end of a big dramatic storyline, maybe isn’t the best place to begin. But coming cold into a comic and playing catch-up can sometimes be fun and fortunately this was one of those times.

Marvel’s handy re-cap policy brought me quickly up to speed, it’s the Fantastic Four and old friends Black Panther and Namor, the Sub-Mariner verses their premier league adversary Doctor Doom and his bride to be Victorious in a classic story of a wedding gone wrong. Then it was straight into the action.

And more action. This issue is pretty much one long pitch battle. I thought it was great. Writer Dan Slott does a good job of keeping the pace up whilst allowing plenty of moments for the characters to shine. If you’d never read the Fantastic Four before this issue, I think you’d come away with a firm handle on each team member and the relationships between them, all within a few brief speech bubbles. There are also a few good jokes to help lighten the tone.

But this is really a Doctor Doom issue. From the magnificent opening page of him in his wedding armour, to the close ups of his scarred eyes peering out from his mask he is running the show, keeping the heroes guessing right up until he plays his final ace, changing the life of one of the unfortunate Four forever.

And if Doctor Doom looks good the rest of the issue isn’t bad either. This is how superhero comics should look. R.B Silva almost liquid art combined with colourist Jesus Aburtov’s bright and bold colours make every page look wonderful. The whole thing crackles with energy, literally in some cases as energy bolts BZZZT with power only to explode in a gigantic KRAAKABOOM. The creative team are clearly having a good time playing with their sound-effects.