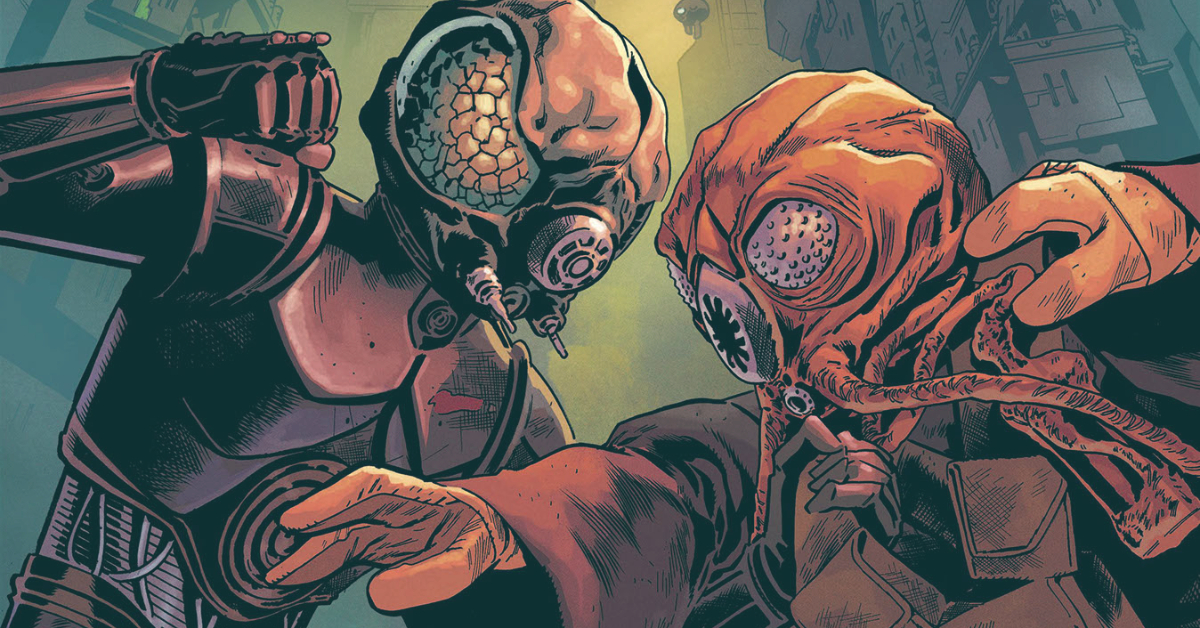 Much like Star Wars #15 before it, 4-LOM & Zuckuss #1 (at least seemingly for now) acts as a bit of a diversion from the main narrative of the War of the Bounty Hunters event that has been running through various Star Wars comics for the past few months.

While the earlier comic was a tense, nail-biting, white-knuckle ride of an issue, Daniel José Older’s approach is a much more light-hearted and humorous one which is no less refreshing. Could any less be expected from the man who brought us the Jedi affectionately known as Buckets of Blood in his work on The High Republic Adventures?

Insectoid bounty hunter Zuckuss and his lethal droid companion 4-LOM have proven surprising fodder for comedy in their appearances in the ongoing Bounty Hunters series and Older takes this even further with a truly madcap approach to his story, bringing in an almost Guardians of the Galaxy style sense of humour to proceedings. Heck, there’s even a raccoon-like creature with a penchant for removing limbs…

That’s not to say that this issue doesn’t have substance and depth – we see Zuckuss in a whole new light by the end of this issue and 4-LOM is certainly transformed, albeit in an altogether more out there, slightly terrifying way, wonderfully revealed in one of a number of Kei Zama’s splash pages. The Japanese artist’s lines are satisfyingly clean, creating a cartoonish feel when paired with Felipe Sobreiro’s dynamic colour work. A lot of this issue’s colour palette is on the darker end of the scale, but when brighter bursts are appropriate, Sobreiro makes the most of them, especially when blaster rounds start firing.

Deva Lompop, the new bounty hunter character introduced in the previous Jabba the Hutt one shot makes an altogether too brief appearance, although that does mean that the focus here is squarely on the title characters, which wasn’t quite the case with Jabba. That said, it would have been fun to see Older take on the character, as her anarchic presence seems like it would fit right within his wheelhouse.

4-LOM & Zuckuss #1 acts as a fun, exciting and somewhat bonkers side-line to the War of the Bounty Hunters, although no doubt the events of this issue will feed into the greater narrative at a later juncture. Older’s script is fast-paced and frenetic and the fun he’s had here is evident. And if the writer has fun, especially in a world like Star Wars, so does the reader. Those who haven’t had a chance to get into the wider event will have a tough job catching up at this point, but this issue stands on its own nicely and thoroughly entertains.