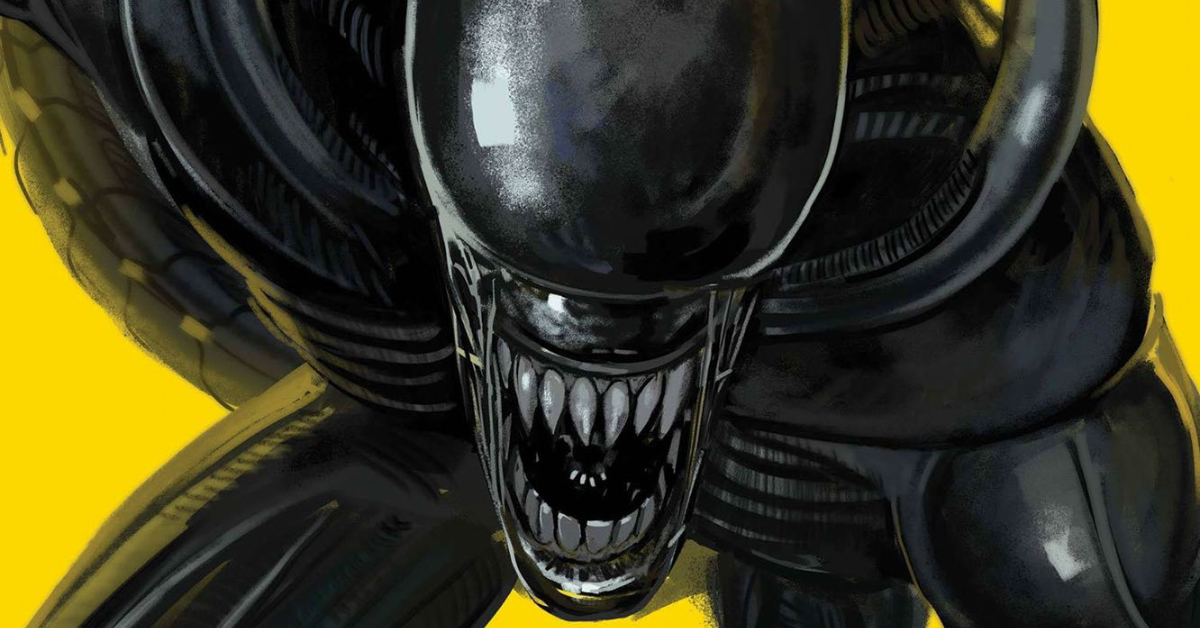 Alien #2’s cover of a ghostly Alien (Xenomorph) super-imposed on our protagonist, Gabe, had me eagerly anticipating what kind of direction this new story was going to develop.

In the first issue we learned that Gabe had been cocooned by xenomorphs in the past and his experience had been instrumental in the ongoing research at the Weyland-Yutani Epsilon station.  Issue #2 Return to Epsilon Station opens with a time line summary of events that bring us up to speed with all things Alien up to this point.

Spoilers ahead!!!
The plot development by Phillip Kennedy Johnson is engaging and progresses at a good pace. It is recognizably Alien franchise in nature, yet has a more Weyland-Yutani focussed twist to its development.
Gabe has to return to Epsilon station having only recently been forced into retirement. Danny, his son, has broken into Epsilon Station with his girlfriend the leader of some anti Weyland-Yutani extremists called the Minute Hand Movement. Gabe may be Danny’s only chance of escape from almost certain death, either as a result of a “catastrophic systems failure”, (a cover up to burn up everything and everyone on Epsilon Station), or at the mercy of a new xenomorph threat that Gabe has helped create and that Danny has released.

Gabe isn’t given much of a choice when he first learns of his son’s transgressions. He would prefer to embark on the mission with five synths (androids). Instead he’s given two wet behind the ears, cocky and ill prepared human agents. The clock is ticking, it’s over 32 hours since Danny boarded Epsilon station. Gabe has to race to face the threat and bring home the company’s prized asset, the ALPHA EMBRYO.

Gabe’s interactions with the company’s agents cement him as a no nonsense salty dog who isn’t easily riled. The flashbacks to his past provide good character depth around his traumatic experiences at the claws of the xenomorphs. Gabe having to get back into the ring with a frightening foe was reminiscent of Ripley returning to LV426 in the face of trauma for the second Alien film.
I really loved a beautifully choreographed xenomorph kill in the middle of this issue. A headstrong, naive and foolhardy agent rushes after a face hugger who attacks from a ceiling tile. Seeing the face hugger enter in this fashion and the impaled agent on an intercepting xenomorph tail is iconic Alien imagery. I recalled Bishop at the end of the Aliens film. The rib removal in this scene was a delightfully gory death on the back of a thrilling piece of action.

Having set up up a new experimental xenomorph outbreak in issue one, the story opens with a frightened girl and her grandpa bathed in emergency lighting red. Outside there is chaos and the sounds of what may be xenomorphs. We are propelled straight into the action. The sound lettering is consistently eerie throughout this issue. The overall feel is claustrophobic, atmospheric and tense. The terror of the girl trying to find comfort in singing to herself provided a nice touch of emotional investment I thought.

Salvador Larroca (Artist) captures the instant terror of what has been released on Epsilon station to open and close this issue well by capturing well the frenzy of xenomorph encounters. Once again GURU-eFX does an outstanding job bringing the art to life, the colouring uses the perfect pallet for terror, suspense and threat lurking just out of sight. The entry to the station for Gabe and the agents is cold and shadowy. The red of the alarms framing the xenomorph encounters at the start and ending of the issue add to the overall heart pumping action. Splendid job GURU-eFX!

Larocca’s Aliens are mostly tracings or copies and this makes some appear clunky, disjointed or misplaced in their framing. The tracings do give a certain consistency to their presence  There is however, so much good xenomorph art to compare Larocca to that he comes off a bit short. The tracings do leave me questioning his passion for producing Alien franchise art. Gabe is drawn inconsistently in facial features and this affects the frame continuity. I did however wonder if this may be deliberate, maybe as part of some sort of clever metamorphosis process linked to Gabe’s encounter with Aliens, a mystery illness we know little about or perhaps as a result of the experimentation he was a party to at Epsilon Station.

The lettering is perfect and flows so well that I found it a great page turner and an easy choice to subscribe for A#3 Reunion. The xenomorphs are out! There is plenty scope in this story and more twists beyond a race to save the day. Keep it rolling Marvel!

Terror, action and horror in equal measures are strung together entertainingly in this continuation of a tense and atmospheric Alien story.