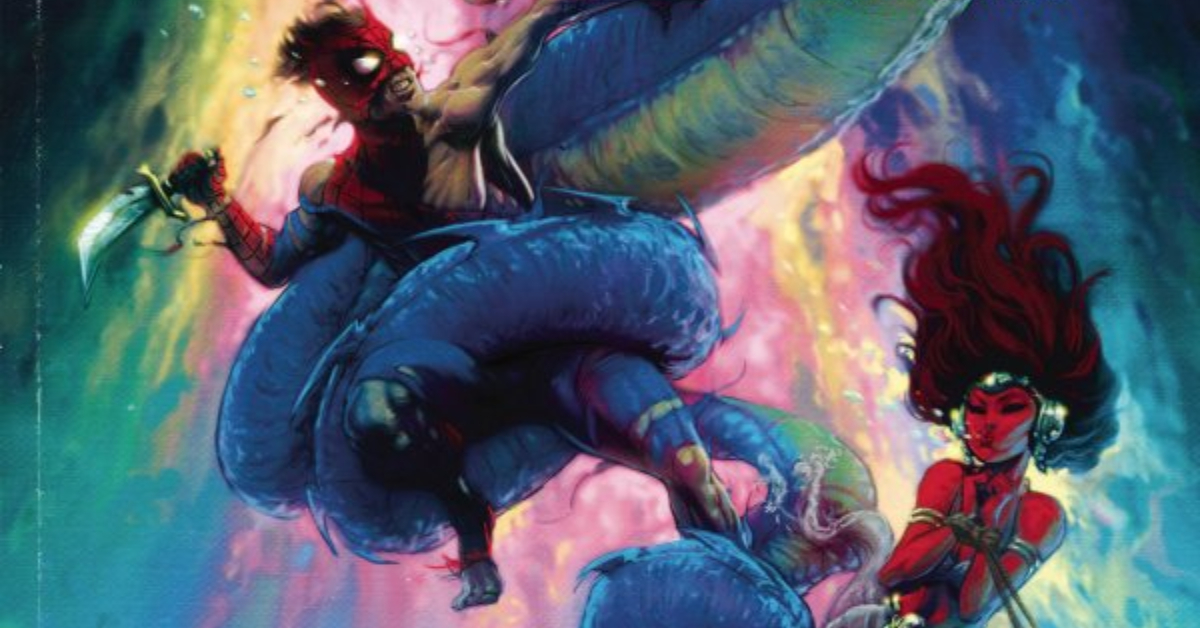 Another luscious cover awaits with issue #2 of Marvel’s Amazing Fantasy, again reminiscent of the pulp fantasy art of bygone times. We’re treated to the spectacle of a beleaguered Spider Man locked in underwater combat with a grotesque giant snake while a captive maiden and treasure await. It’s a scene full of nostalgia, bringing to mind many of the great illustrations from the sword and sorcery genre.

This gorgeous cover painting does a great job of making the reader wonder why Spidey finds himself in such a situation and why he’s wielding a dagger and a whole host of other questions. Some are answered ably in the ‘story so far’ blurb on the title page within. Broadly, World War II Captain America, teenage Spidey and young Black Widow find themselves in a strange land after having seemingly died or otherwise departed their plane of existence.

Each then encounter fantastical, fearsome and, in some cases, ethereal beings and become involved with the people of this new land. ‘Tribes’ picks up from the last instalment with a nightmare for Spidey, a journey for Cap’ and pampering for Black Widow. Each goes on to have different adventures with their adoptive tribes, revealing more of the world as the story unfolds. And what a world it is, full of sweeping vistas, dense forests and grand throne rooms. Equally interesting are its denizens, split into at least three factions in conflict.

It’s apparent that Kaare Andrews has enjoyed creating this world and he’s crafted a story which makes the integration of our super heroes into this almost classic fantasy setting a lot of fun to experience. As we go along for the ride, we see dragon flights, elves, orcs and more. We encounter danger, romance, conflict and intrigue. We, as readers, have a really good time. The creator’s passion for this project shines through and includes us in the excitement.

Andrews plays with different ideas in both the art and writing, using light and shadow along with vibrant colours and distinctive line work to great effect. He teases us with hints of what is going on in the world and suggestions of why our protagonists might be there while always keeping things moving forward.

Even after the mysterious reveal at the end of this chapter, this near one man show isn’t quite done with us. We are treated to some back matter showing some of the creative process, including a cover concept sketch and several page layout to finished colours examples. These insights should be included more often, as they deepen the appreciation for just how much goes into making a comic like this. Lastly, we get a sneak preview of next issue’s cover, and it’s a thing of beauty; reason enough, in fact to look forward to #3!

If all that doesn’t tempt you, we get even more value for money with this series, as each issue comes with a bonus digital edition code inside, for use on tablets, phones and the like. Being able to pan, scan, pinch and zoom to your heart’s content offers another way to enjoy this great title.

It’s hopefully pretty clear by now that I love this pulp fantasy and sci-fi infused title and, for me, the covers alone seal the deal. That said, these are a great choice for someone wanting something unpretentiously entertaining from their comics or an adventure story to share with their kids. It’s a short run, which makes it manageable, and it has a genuinely unique feel. Give Amazing Fantasy a try, if you can. I think you’ll stay for more than just the covers.