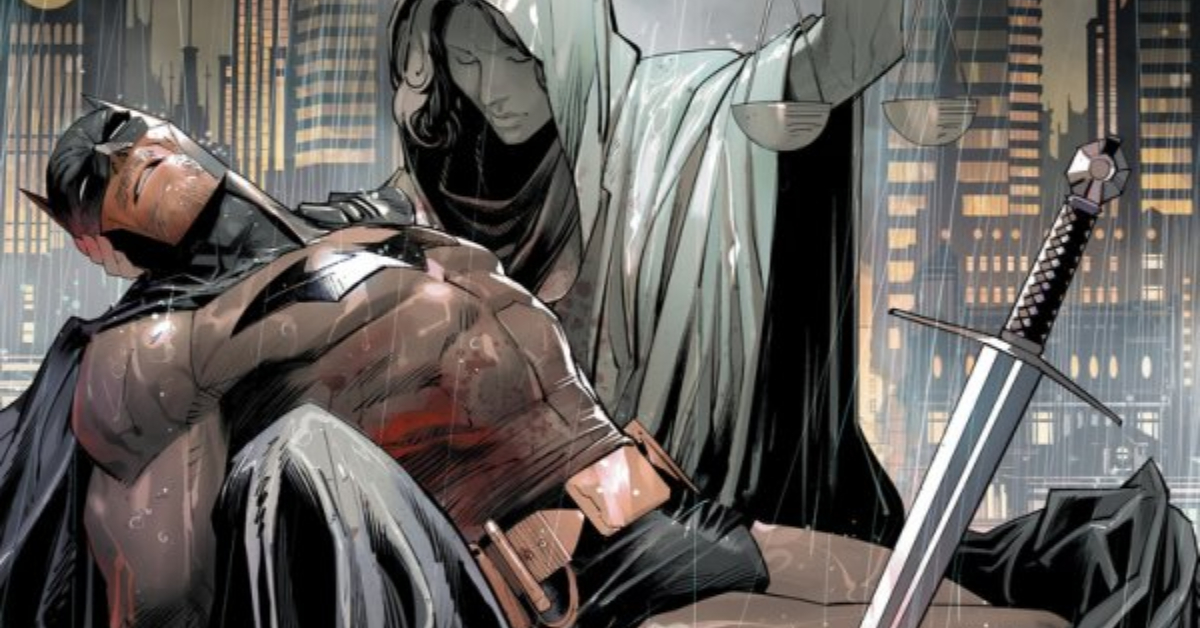 Batman is called out by “The Jury”, a host of Gotham’s criminal underworld, led by Penguin, the Falcone’s and Mr Worth. But when he shows up to meet them, in order to answer for his “crimes”, he finds himself dealing with those who are unwilling to listen to reason. Batman is caught in a trap that might tether his very soul to that of another: Hugh Vile.

I would love to know just what information it was exactly that Oracle gave to the authorities in order to facilitate the release of Bruce Wayne. Mayor Nakano still appears to be clueless about Hugh Vile’s involvement in the whole affair, but surely that would have been the first piece of information that Barbara would have handed over! It only adds to my frustration over the sloppy handling of the story in the last two issues.

Aside from that though, writer Mariko Tamaki goes some way to winning me back on this issue. I like the motely crew of second string villains, led by Penguin, now referring to themselves as The Jury. Each one of these guys on their own probably doesn’t pose much of a threat to Batman. United, however, they may prove to be more than effective as a collective adversary. I think this is proven by the end of Tamaki’s story, in which Batman finds himself in quite the predicament, albeit one that reveals a rather interesting link to Huntress that has the potential to go to some exciting places.

One of the more interesting aspects of the current run of Batman comics is the fact that Bruce no longer has the endless wealth that he once had at his disposal. This means Batman has become more like a street rat, operating out of the sewers, without the security of his old bat-cave. This sometimes results in moments of humour, such as the one Tamaki gives us here, in which Bruce scares a woman carrying her groceries when he climbs out of a sewer grate.
These moments of Bruce struggling to live the life he once lived without the resources he once had also make me long for, perhaps a more valuable missing piece, Alfred Pennyworth, the father figure that Bruce is now lacking and yet sorely needs. Seeing him calling Oracle about business, inside a diner with public gawkers, is somehow one of the saddest reflections of just how far he has fallen from the ivory tower. Dare I say, he seems quite pathetic these days, when dressed in his civilian clothes!

Matthew Rosenberg’s B story, “What The #!$% Is Task Force Z Part 1”, is a really great start to a Deb Donovan adventure. It is filled with intrigue as the no nonsense reporter begins investigating the apparent disappearance of bodies from the Gotham City morgue. Rosenberg has a real knack for dialogue and the art from Darick Robertson is very easy on the eye. I’ve said before that I am really enjoying the Deb Donovan character. But, on the strength of Rosenberg and Robertson’s work here, I’d go so far as to say that, if these guys were assigned to a Deb Donovan monthly title, I’d be the first in line for a pre-order.

Mariko Tamaki shows us just how far Bruce has fallen and how, now more than ever, he is in need of allies. Backed up with excellent artwork from Dan Mora and Jordie Bellaire, she is able to give us a really great character study of Bruce Wayne/Batman, as he struggles to maintain the vigilante life-style without the resources he once had.