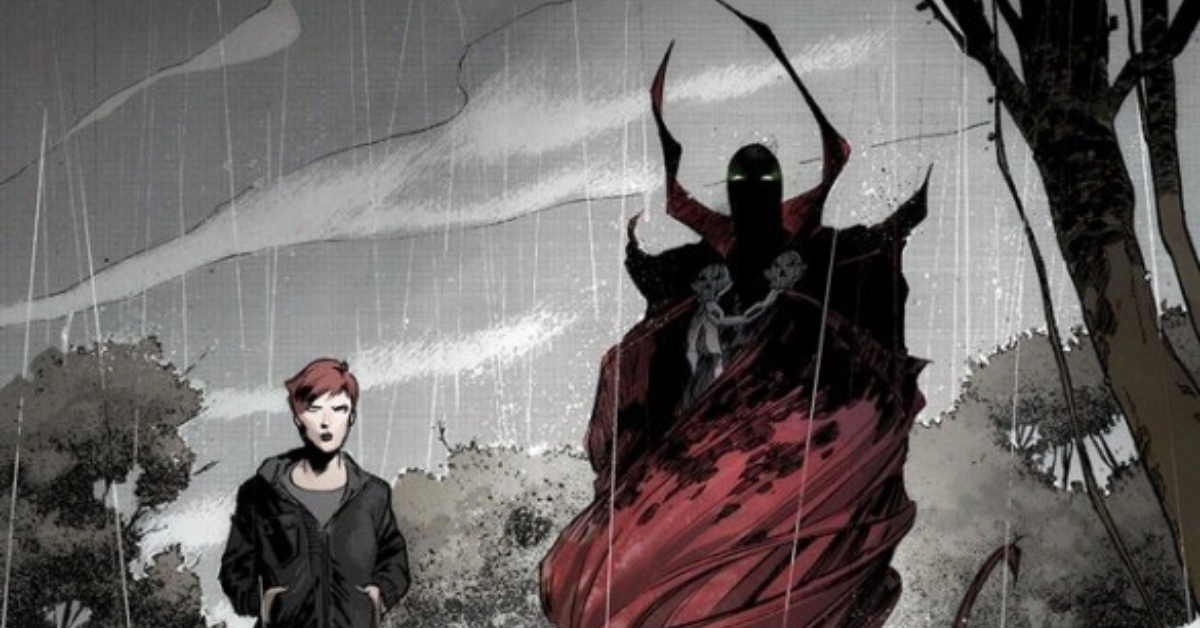 King spawn number one has arrived! The most anticipated spawn book since 1992 is here and it sure lives up to the disturbing nature it’s famously set for the last 30 years. The book contains five stories, so guess what? That’s right, we’re going through them all, one by one. Strap in!

The first is a (slightly disturbing) story about some cultists who murder children. Yep. Spawn is caught in the midst of this discovers the existence of a man(?) Named Metatron and sets out to of course stop him. Little does he know that this horrifying series of events is bigger than he can fathom and next thing he knows…. Megaton is quite dead. Murdered, even (in a pretty gruesome fashion). Turns out the big man behind the whole kid killing thing is none other than new York’s own resident serial killer turned evil hell-being: Billy Kincaid! In case you aren’t in the know, Kincaid is one of spawn’s earliest villains. The story is particularly traumatising and involves the disgusting evil-doer parading as an ice cream man and terrifying children all around. Eventually spawn saves the remaining children and puts an end to Billy’s reign of horror (permanently). He was revealed to be alive about a year ago after being presumed dead for nearly thirty.
This stories art is pretty solid, Javi Fernandez delivers on some form fitting Spawn art, scratchy with a pseudo realism style and it works. Spawn looks great but there are sections where it looks a little like it was traced over 3d models but so did Szymon Kudranski and Jason Shawn Alexander’s work. Sean Lewis’ writing is as good as it can be and I didn’t notice any weird, awkward pieces of dialogue. Moving on!

The second story was the one I was most excited about. Its the return of HAUNT!!! The character (created by Kirkman and McFarlane) was completely forgot about almost a decade ago, he’s a priest who is bonded with a symbiote and sent on missions by his dead military brother, that’s the basic gyst anyways. So this new story didn’t give put too much but at least we know he’s still around. He’s pinned to a wall jesus style with knives by the redeemer and then told about his involvement with heaven and hell, its basically a nice little check up on the character with some pretty amazing art by Stephen Segovia. To the next one!

Nightmare is a story I won’t linger on too much. It’s kind of gross and disturbing and is very, very short. The artwork by Marcio Takara is usually very nice and bright but here it makes we want to run into the nearest wardrobe and lock myself in for a month or two.

The story focuses on a Spawn? (Not exactly sure which one). Killing a couple guys in a particularly non-pleasant fashion and then it ends. “Nightmare” was for sure the right title to choose for this section.
“the hero” is kind of weird. It involves an angel brutally murdering a bunch of gangsters. The child of one of said gangsters comes back to see all the dead men and the redeemer looking guy who tells the kid HE did it and that they are basically one. He also reveals the child’s father is alive. Father and son reunjte. Angel leaves. Spawn looms. The end. The artwork in this portion is sensational and illustrated by spawn vet Phillip Tan and looks stunning in the parts without decapitated heads.

The last story is a continuation of the gunslinger back up featured in spawn’s universe. It’s pretty damn solid and gets the reader pumped for the next ongoing spawn title coming in October (which will be available to pre order from this lovely website if it isn’t already) Brett Booth really knocks jt out of the park here.

In summary, King Spawn is a grisly and disturbing read that any hardcore fan of the franchise will surely get a kick out of. It isn’t for everyone but it’s certainly fitting of the spawn title and dishes out some real entertainment any comic reader will appreciate.