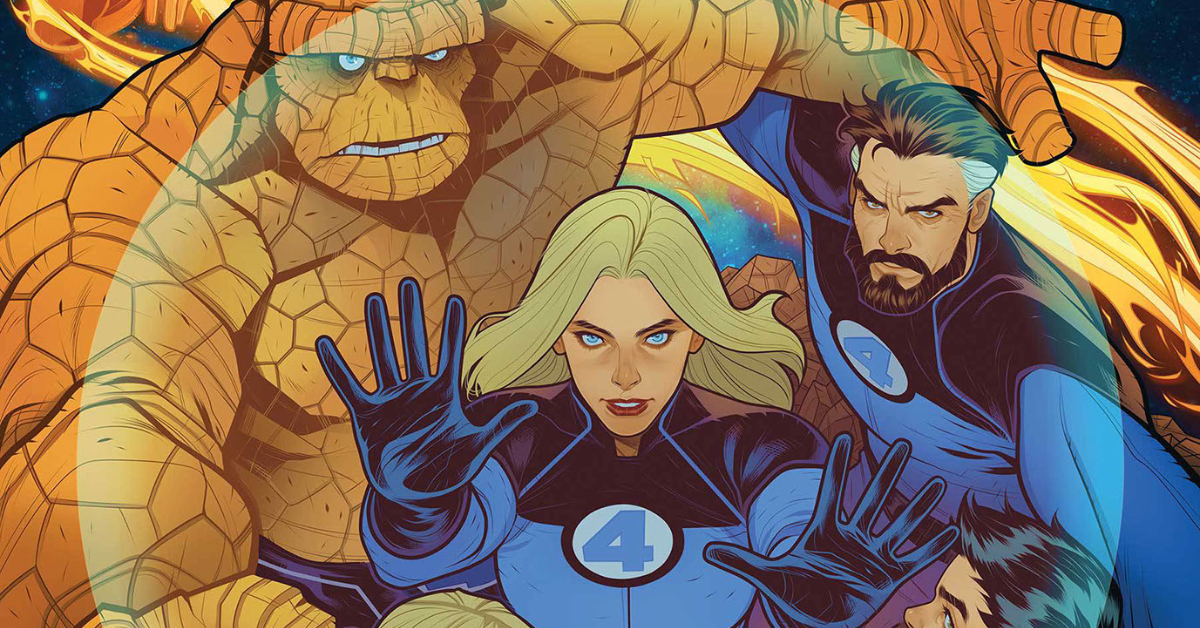 The main feature is written by series regular Dan Slott with art by John Romita Jr and together they craft a fun time travelling adventure into the FF’s history. Kang the Conqueror, time surfing megalomaniac and his various incarnations are on the hunt for ‘The Prize’, a final gift left to Reed Richards by his father, which had been split into four pieces and hidden at different points in Richard’s time line. Naturally the Kangs want it, whatever it is, and that’s reason enough for each Kang to invade a different period in the team’s past.

First stop, the sixties and the team are still new, still coming to terms with their powers. The first Kang turns up with an army of loyal Sarcophobots (Robots dressed as Egyptian mummies, and my new favourite word) and using his future knowledge promptly defeats the fledging team.

Trips to the nineties and noughties follow and its soon three nil to the Kangs, who bicker and gloat, like a bunch of evil Doctor Whos. I won’t spoil part four of the story but its safe to say that all is not lost and Reed Richards has a plan. It all ends when we find out what the Prize is, setting up the next issue and Slott’s on-going story.

The trips to the past are good fun and Slott and Romita Jr don’t try and emulate the styles of comics past. They have their own story to tell. Instead, we’re treated to some nice homage covers in-between each jaunt, which help set the scene and allow Slott to keep the story moving at a brisk pace helped along by Romita Jr’s quick, bombastic art.

After the main event come two back up features. A two-page spread written and draw by Jason Loo sees a trip to the park interrupted by The Mole Man in an echo of the Four’s first issue story from 1961.  Loo packs in the panels and the story reads like a choose your own adventure puzzle giving the reader four paths to follow to the inevitable gag punchline. It’s an entertaining diversion before the third offering, a fresh retelling of the team’s origin story written by Mark Waid with art by Paul Renaud.

This time the story is told from the point of view of Mr Fantastic and how he carries the guilt for changing his friends lives forever. It was his over confidence and arrogance that unintentionally caused the horrific transformations that changed Sue, Ben, Johnny into The Invisible Woman, The Thing and The Human Torch. And Renaud’s art definitely portrays the changes as horrifying. Particularly that of Johnny Storm who is drawn as a man literally burning alive. In the first moments after the transformation, they are presented as monsters, terrified of each other and themselves. Four individuals afraid and divided.

Richards imagines them as outcasts shunned by society, their old lives full of promise and hope, over forever. His redemption comes by changing this fate, using all his talents to give them new lives. One of fame and adventure. Turning them into a team of superstars. Heroes.

This is easily the best FF origin story I’ve read and any new fan experiencing the story for the first time is in for a treat. My favourite story of the three on offer.

Naturally there’s a strong theme of family linking the stories and especially highlighting its importance to Reed Richards himself. Both Slott and Waid acknowledge that for Richards, nothing is more important than his family.

Thoroughly enjoyed it. A great birthday issue with a marvellous time traveling romp and a fresh perspective on the team’s origin. Definitely worth a read for old fans and new. Plus, there’s a letters page, which is always a good thing.