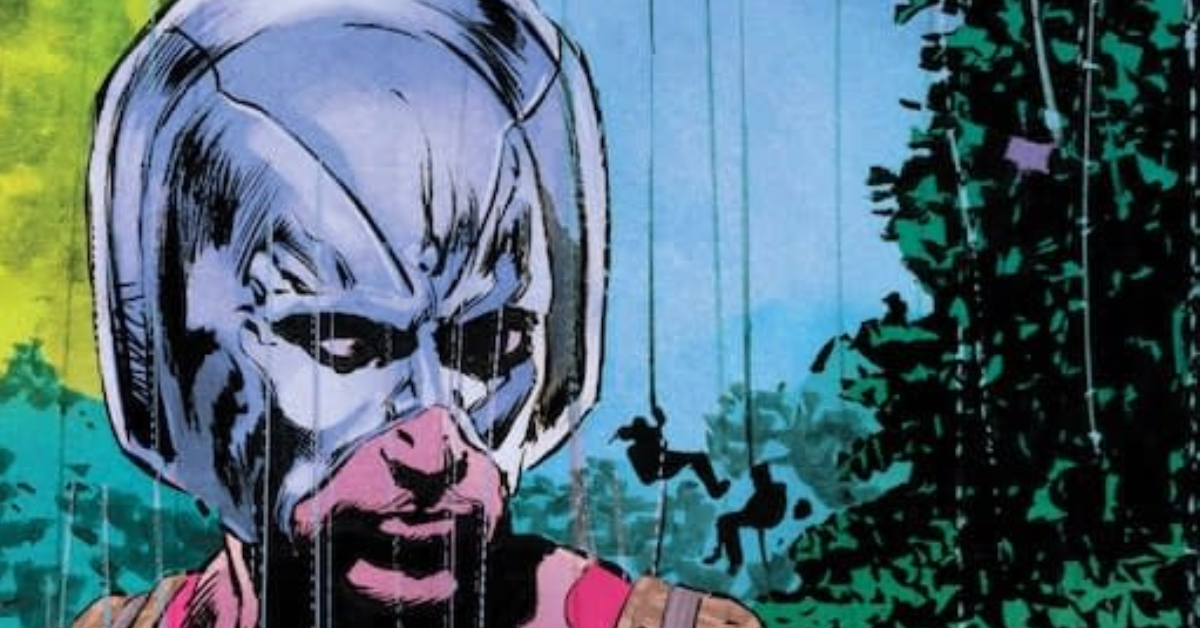 In the wake of ‘Survivor Bomb’, we come to issue 6 wondering ‘what’s next?’ and find Swamp Thing, looming from the dark of a forest, rain all around, a thermographic crosshair tracking his enraged form.  Every cover for this run has been a stand-out example of the form and this is no exception.  Mike Perkins and Mike Spicer’s cover work is exemplary and telegraphs some of the amazing visual storytelling to be found within.

Turning to the first page, we find a sinister aircraft, bristling with weaponry, framed against an infernal sky above a lush forest.  We are in Kaziranga Forest, India and, as the story unfolds against this striking backdrop, we see further aspects of the taint in The Green.

The double spread title page of ‘In My Infancy’ is astounding.  As a portrayal of Levi Kamei’s return to being through confused transformative process, it is note perfect.  As he writhes and wrestles with his strange rebirth over thirty-two immaculate panels, we then go on to see Levi is immediately under threat as the Suicide Squad touch down, tasked with his capture.  Believing the deployment of a bio-agent to have prepared the battlefield in their favour, Peacemaker, Nightmare Nurse, Heat Wave, Parasite and Chemo deploy with ill-placed confidence.

They are a task force in name only, and are clearly at odds with one another.  Even as they close in, Levi is faced with a Green that is diminishing.  He delves into memory, to tap into the depths of the Green’s power and so, as the action unfolds, we have momentary insights into Levi’s past and his struggles with family and identity.  It’s a phenomenal episode, which moves effortlessly from moments of brutality to glimpses of tender tranquility.

And I’ve no idea how they’re doing it.  Reading Swamp Thing is like witnessing comic book witchcraft; what strange, eldritch secrets do the creators employ to weave something this good?  Every page is surprising, be it mystifying, uplifting, thrilling or horrifying, each one, every panel, is of such high quality that it’s impossible not to be hugely impressed and entertained.

Ram V’s writing meshes perfectly with the deft and inventive lettering of Aditya Bidikar; with the always incredible lines of Mike Perkins’ art; with the vibrant, near tangible colours of Mike Spicer… It’s such a tour-de-force of complimentary talents that to break it down into analysis of each element as a separate entity seems like the wrong approach.  With every issue, we are transported as we read, our every sense somehow engaged and our imaginations fired up.

From quiet moments drinking tea through to loud, nasty displays of violence, we are fully immersed.  And always, the story moves forward, we come to know more of our hero and understand perhaps a little more of what is going on while glimpsing a hint of what lies ahead.  The final splash page is not only a superb piece of art but bears the words ‘to be continued…’ Rarely have I been so glad to have more to look forward to.

Everything about this book is the absolute best of what comics have to offer.  I’m convinced that this 10 issue run will be considered a classic by a great many people.  I already count myself among them.  Swamp Thing comes with the highest possible praise and is unreservedly recommended.