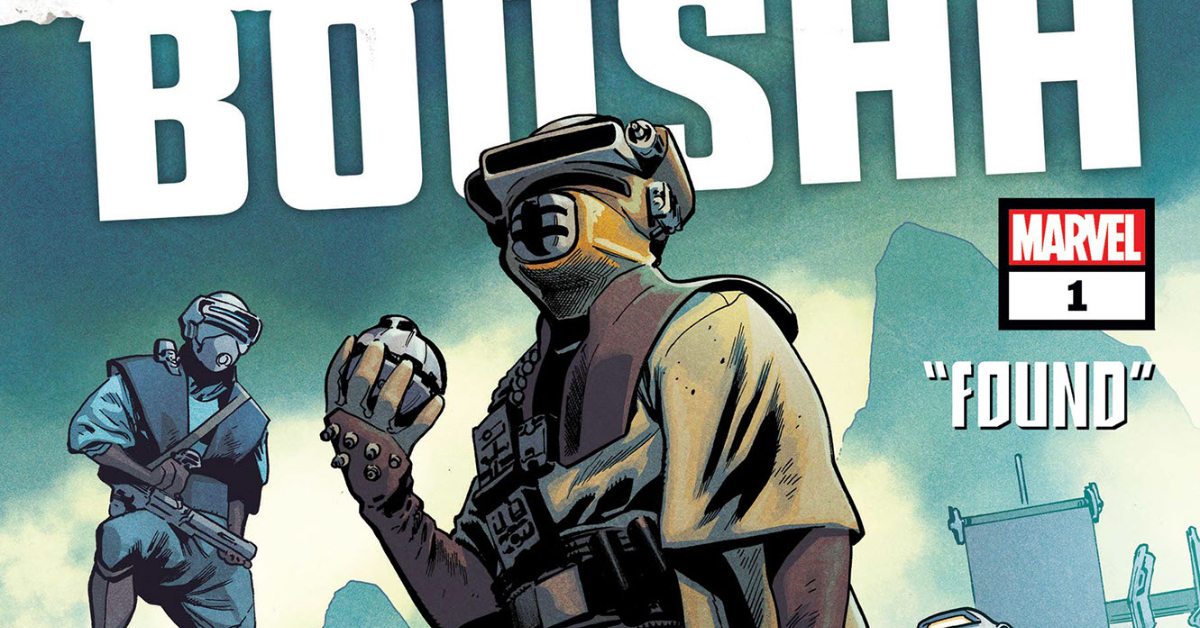 The massive, line-wide War of the Bounty Hunters narrative has rumbled on for several months now, with characters, major plot points and events spreading and intersecting across all the ongoing Star Wars titles. The slight outliers, however, have been the one-shots that have been thrown into the mix. While the stories of Jabba the Hutt and 4-LOM & Zuckuss have certainly depended on the happenings of the main series, they haven’t had the biggest impact on the overarching tale. Each has been fun, but not much else besides.

The same sense of playfulness runs through Alyssa Wong and David Baldeon’s Boussh #1, but while it may still be another title that has little impact on the core mini-series, it is an essential read in its own right. Wong and Baldeon deliver an action-packed, emotionally driven, self-contained narrative that brings to the fore everything that makes this event’s focus on the seedier side of the Star Wars galaxy so appealing.

Making one of the many bounty hunters that litter the Star Wars universe (and filled the toy boxes of many a child of the 80s) stand out can’t be an easy job – each of them is appealing in their own way but, no matter how badass a writer might try to make them, they will always be eclipsed by the man himself, Boba Fett. Wong takes a slightly different approach here. Boushh is certainly tough and knows what he is doing, but it’s his personal background and how the cruel laws of his home planet of Uba have shaped him into who he is that make him a truly engaging character. Wong has done a sterling job of making us care not only for Boushh but for his entire crew of exiles who, in just a few short pages, are convincingly positioned as a sort of family who could probably carry their own ongoing series (especially if Wong were at the helm).

What’s even more astounding is that Boushh isn’t even the best part of this book (though he comes a very close second). That honour goes to ruthless crime boss Domina Tagge, featured recently in Wong’s ongoing run on Doctor Aphra. She’s at once sexy and scary, a force to be reckoned with who would evidently do anything to maintain supremacy, as skilled of a talker as she is a fighter. Her dialogue drips with charm and malice and, in the moments where words aren’t required, Baldeon does just as good a job as Wong of imbuing her with a sense of self-righteousness and power – a raised eyebrow here, a half-smile there; every little detail is beautifully considered and skilfully conveyed.

Baldeon’s subtlety, quite rightly, goes out of the window for the more action-oriented panels. They have the vibrancy of work by Pepe Larraz and the eye-popping, cartoonish gorgeousness of the pencils of fellow Star Wars artist, Luke Ross and are wonderfully embellished with colours by Israel Silva. Burnished oranges leap off the page throughout the book, from Boushh’s tragic backstory to the humming plasma blade wielded by Domina Tagge, to the fiery backgrounds that compliment the book’s dramatic and satisfying conclusion.

While it may be part of a bigger story, Boushh #1 is a near-perfect standalone story, and we can only hope that this one-shot morphs into something much bigger in the future. A wish list for the attention of Marvel, Disney and Lucasfilm: