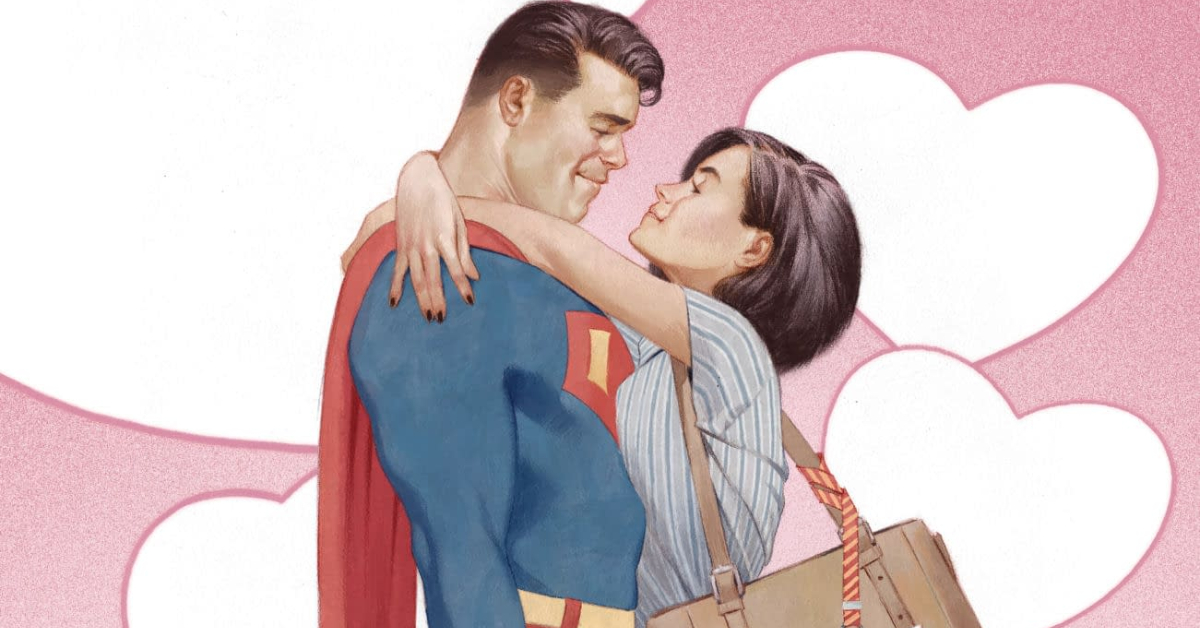 The sixth and seemingly final part of the ‘Warworld Rising’ saga brings us a cover depicting ‘The Goodbye!’, words which can be read in a number of ways, as we see Superman leaving not only Lois and Jon but the Justice League too, if the headline on the paper at Jon’s feet is to be believed. In the wake of events during the stand-off between Atlantis and the surface dwellers, this is not too surprising. It’s a great cover from Daniel Sampere and Alejandro Sanchez, capturing the emotional departure of Superman perfectly.

Reading on and we’re straight into the action as Jon and Supergirl take on Thao-La while Superman whisks Lois to safety. The ensuing explosive battle is complicated further by Mongul’s ongoing insidious interference and eventually leads to Clark seeing this particular nemesis face-to-face.

As Superman and family have a brief respite to recover from the events set in motion by Mongul, discussion turns to what happens next, both within his family and with his ‘other family’, the Justice League. The League visit the Fortress to check on all concerned and confirm that, as things stand, they cannot accompany Superman to Warworld. Batman and Superman share a quiet word, alluding to a second team (this further outlined in Batman/Superman and The Authority #1) while Bruce expresses concern for his friend, Clark.

What follows for the rest of this final chapter are emotional scenes of farewell as Clark says goodbye to Jon and then Lois ahead of his departure for Warworld, with his backup team being fully revealed on the closing page.

In writing this series, Philip Kennedy Johnson has always done an incredible job of balancing plot and character development with spectacular action scenes. We have a huge amount going on each issue and yet never feel overwhelmed. He’s a talented storyteller, juggling a good number of characters, settings and events and weaving a cohesive whole as he goes.

Meanwhile, Dave Sharpe has always supported and enhanced the work of each writer on both main and back-up titles through clear, clever and effective lettering and this issue is no exception. It’s always a pleasure to read when Mr. Sharpe is helping guide our way.

Further guiding us are the excellent panel layouts, which hold some of the most striking art you could hope to see in a superhero title. Daniel Sampere conveys super humans in really effective ways, with dynamic poses, judicial use of exaggerated anatomy and clean, confident line work. The end result is stunning, especially when paired with gorgeous colour work from Adriano Lucas. This issue in particular is a stand-out one for Mr. Lucas, as he takes the spectrum and makes it his own, using light to reinforce the emotional impact of each scene.

There are some huge moments within this issue, and the team have delivered some pitch-perfect work here. It’s a gripping and satisfying end to an excellent story.

Replacing Midnighter as the backup story is ‘Tales of Metropolis’. Our first tale is ‘The Guardian’, brought to us by a team who seem ready to have a lot of fun. In this opening story, they mine the rich vein of urban myth and folklore and emerge with something very much of the present day. We join Jimmy Olsen in detective mode, with trench coat to boot, as he investigates stories of kids getting involved in something called the ‘Cloud Game’ and subsequently going missing.

It’s clear something dark and dangerous is afoot, and so he enlists the help of Guardian. As more kids fall prey to the high-tech ouija board and the malevolent villain Dismember, Olsen and Guardian race to save them and stop the situation from getting worse.

This is a strong opener for Tales of Metropolis. The story is fast paced and well written, with convincing dialogue and a good sense of character from the pen of writer Sean Lewis. Olsen’s narration via internal monologue works well here, serving to take us down those mean streets of Metropolis with him as he searches for the missing kids.

Art is dynamic and expressive, with a clean, well executed style which renders the characters in a really pleasing way. As I look at Sami Basri and Ulises Arreola’s work, I see some hints of manga/anime influences blended in with a distinctly modern western style and, especially when considered along with the colours, the art could easily be the basis for the look of another run of animated shorts (Tales of Metropolis was a series of animated shorts featuring some of said city’s more notable characters). Basri’s characters are lively and engaging, and each panel has gorgeous and vivid colours from Arreola, making for a great first outing.

Here’s an issue where we see the close of one story and greet the start of another. It’s an easy recommendation, as the closing of Superman’ story contains some unforgettable and classic moments. Meanwhile, the new Jimmy Olsen and Guardian tale has plenty to offer and feels both a contrast and compliment to the lead story. Action Comics remains a really nice title in the DC lineup. If you haven’t done so before, consider jumping on board, as new storylines begin.