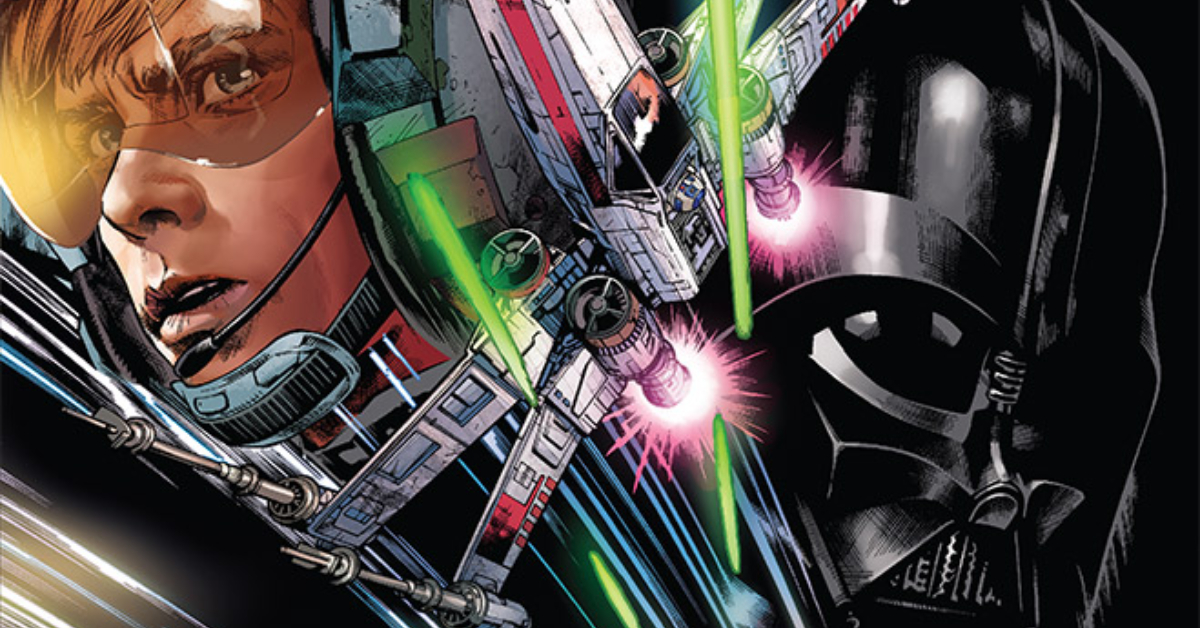 The showdown between Darth Vader and Luke Skywalker continues in another beautiful balancing act of an issue by Charles Soule and Ramon Rosanas.

‘The Chase’ of the title that graces the stunningly put together cover of #17 makes up the first, frenetic half, which sees Luke and Vader’s…well…chase finally coming to a head in truly cinematic fashion. Ramon Rosanas’ work continues to be absolutely top notch, with each beat of the action rendered in expansive, eye-catching panels, that flit between widescreen and a page-stealing, taller style – Rosanas may as well be drawing in IMAX at this point, and it works so well for the flagship title in Marvel’s cinematic fleet.

Luke’s lack of confidence in his own abilities continues to pervade his every move, and Soule writes it convincingly. In his element, swooping above Jekara in his X-Wing, Luke confronts Vader’s taunts head on. However, when faced with the prospect of finally ending the life of the man who he’s recently found it is his father, he is less sure of himself. Soule makes the switch between each state of mind natural and completely understandable. Luke’s inner turmoil has been a key focus of the run so far, as he progresses as a Jedi and a pilot while constant flashbacks to the traumatic events of Empire continue to haunt him.

The second half of the issue is an altogether less action-packed affair, which only serves to further show the dexterity and versatility of this team. Soule and Rosanas move from semi-mute action scenes with near full-page panels, to dialogue-heavy character moments in the cramped confines of the Millennium Falcon, reflected brilliantly in the tightening of the visual focus.

The particulars of the situation that Lando, Leia, Chewie and Lobot find themselves in allow Soule to do something for a second time that was impressive enough the first time around. In a quiet, intimate moment between Lando and his beloved former ship, Soule gives new life and relevance to an element of the somewhat patchy Solo: A Star Wars Story. While certainly not as big as the return of Q’ira (and her upcoming continued adventures in next month’s Crimson Reign mini-series), it’s a nice moment that comes as a real surprise and will certainly raise a smile for those who enjoyed elements of what was otherwise a movie about the origin of Han Solo’s bits and bobs!

This moment leads wonderfully into a real change in Lando and the other characters’ perception of him, which is the first sign of the pieces being put in place for where everyone is as a character by the time Return of the Jedi rolls around. Here’s hoping this isn’t a sign that this consistently brilliant run is nearing its end!

Soule and Rosanas’ winning streak continues unabated in this latest issue which manages to be both thrillingly epic and beautifully small. Soule never neglects character, even in the most action-packed of moments and that skill is used to full effect here, allowing Rosanas to flex all his artistic muscles throughout.