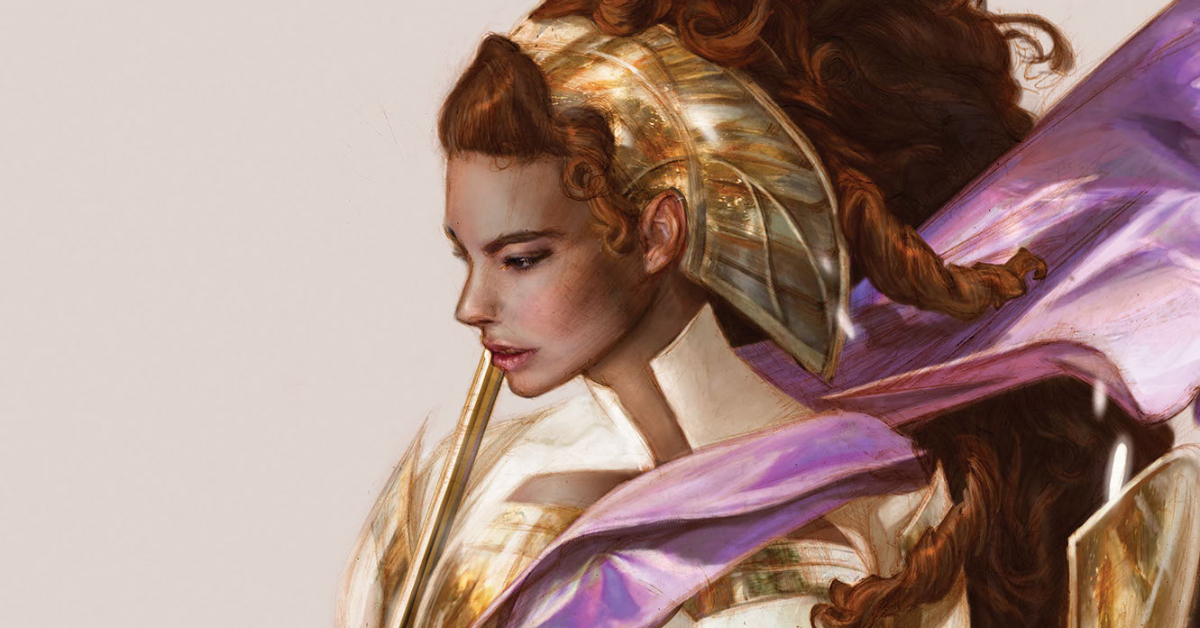 Green Arrow and Black Canary facing overwhelming odds in the form of multiple (!?) Deathstrokes is exactly the sort of high-concept, action packed, crowd pleasing scene we might expect from Justice League. David Marquez and Alejandro Sanchez really deliver with this kinetically charged cover; it’s a crazy piece of choreography and the sort of thing that can only really work in comics.

‘United Order: Part Four’ opens on two contrasting scenes: a moody, Bourne-esque sequence as Leonardo Lane/The Daemon Rose nurses his wounds and gathers his thoughts following his near-deadly encounter with a Deathstroke imposter; meanwhile, the Justice League and The United Order are locked in a mighty battle with the nigh-incalculable might of Synmar Utopica (a Superman analog gone awry from the farthest reaches of the Galaxy).

Even with the recent addition of Black Adam and a new ‘mega power’ from another world, Naomi, the Justice League has been struggling to contain the mighty alien threat. Following his escape from the United Order, he raced to attack Earth and draw out Superman. In the process, the Hall of Justice has fallen. Incredibly, Synmar Utopica seems indomitable, even with the added might of various alien heroes from across the galaxy. His power grows ever stronger, feeding off the might of his opponents. This leads to Batman and Superman resorting to drastic measures…

This Justice League story has been quite high concept and high impact so far, and this chapter is no exception. Just as with the previous story written by Brian Michael Bendis, there are a large number of characters in play, and each gets their own ‘title card’ introduction. This is a great idea for those not familiar with all characters and certainly comes into its own when dealing with members of the United Order. There’s a fair amount to keep track of as more characters enter the fray and yet this remains a title which seems geared toward accessibility, inclusion and popcorn entertainment.

It’s occurred to me while reading previous issues that perhaps Bendis is writing for a younger, or at least newer audience, one accessing comics by way of the DC cinema and TV offerings. Certainly Justice League has been working on this level thus far and has even had tie-in covers with the recent ‘Zach Snyder’ cut of the Justice League film. With an approach that courts mass appeal, Bendis writes huge battles and set-pieces punctuated with classic, comic book style dialogue throughout this action packed issue.

His words are paired with some high intensity art from Phil Hester and Eric Gapstur, coloured here by ‘Hi-Fi’. There’s a bold, slightly angular style which calls to mind some of the DC animated series while also having a tone all its own. Hester’s distinctive renderings are emphasised with sure-handed inks and high-saturation colours. Each art team working on this title thus far has brought its own stamp, and these guys are no exception. It’s a busy story, with some crowded sequences, but they convey proceedings with confidence and skill.

Moving from the high octane, interstellar antics of the main Justice League story to this issue’s instalment of Justice League Dark, we find an entirely different proposition. This story has been phenomenal, so far; lurking in the shadows of the main title, waiting for the unsuspecting reader…

Any comic story that opens on a wide black panel, empty aside from a quote from Algernon Blackwood (a British writer of supernatural stories, admired by many, including H.P. Lovecraft, for those looking to delve further!), is looking to do things a little differently. The JLD are in pursuit of Merlin (yes, the Merlin of Arthurian legend) and hope to stop him from achieving his goal of tapping into some ancient dark power.

We join the action in Atlantis, a city under siege. While John Constantine plays for time with Merlin, Aquaman, Zatana, Etrigan and company fight to defend Atlantis’ borders from multiple sinister threats raised or summoned by Merlin. It’s an action packed episode for this run, almost atypically so, having been at times more cerebral and deeply atmospheric in the past. No matter the pace, however; Justice League Dark delivers on every page, every issue.

With Ram V, at the helm, this run has been immensely enjoyable. Often clever and surprising and unfailingly engaging, Ram V’s story has been a joy to follow. With a motley crew facing down one of the greatest magical beings in this or any other existence, there have been many memorable moments. I’m happy to report that this time out is no exception. Further, Ram V seems to collaborate with some outstanding teams, and the guys working on the art and lettering this issue (as with all previous ones) provide some truly excellent, jaw dropping panels.

Justice League is a title to be enjoyed either by jumping right in and embracing the feeling of not knowing entirely what’s going on, or you can choose to backpedal through a few back issues and play ‘catch-up’. It pretty much works either way, and chances are good you’ll find things to enjoy, as Bendis and the team bring some big-moment super hero story beats to the page. Justice League Dark, meanwhile, can similarly be enjoyed either way but almost certainly would reveal its best version when read in its entirety. It’s a really special title, and one I hope gets a collected edition in the future.

(Recommended by DC for readers 13+)