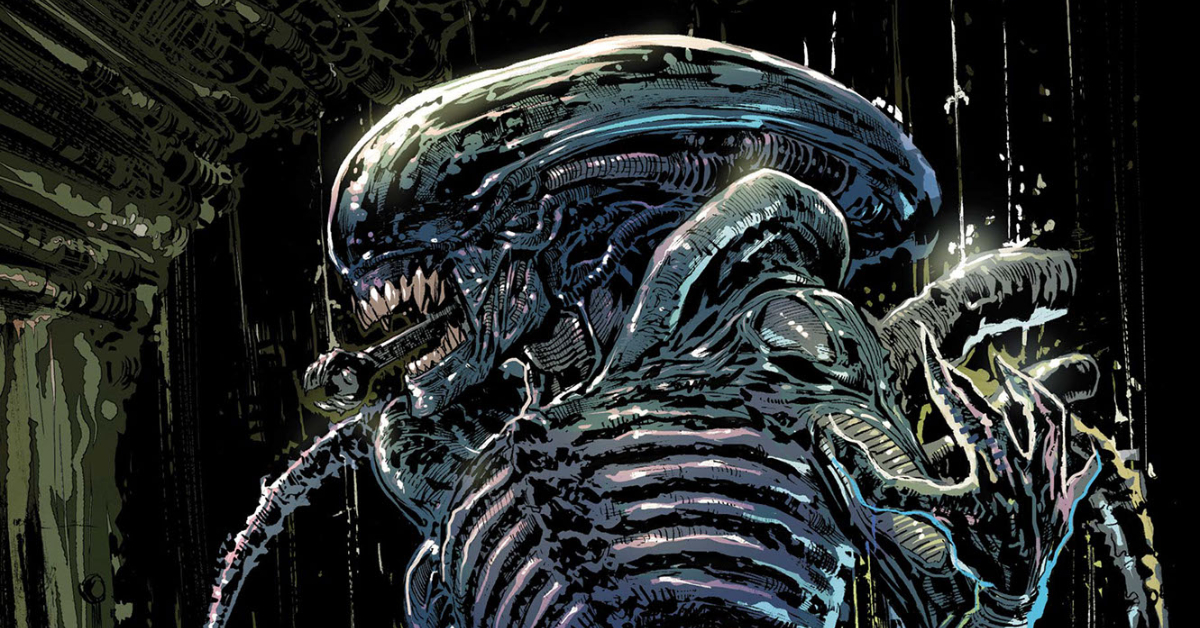 This first foray into the Alien universe for Marvel has had many a critical eye from its considerable fan base.
I’ve found the issues so far have been limited in true horror scares as they focussed well on a more action based theme. This issue is well written and the lettering flowed to compliment the pace and developing many a possible twist. The central theme finds a good blend of characters descending into the bowels of the infested depths of the Epsilon station Alien hive.

Is that Mark Wahlberg or Gabe Cruz on the cover of this issue with a poorly painted Bishop sandwiched between two Aliens? The covers and variants of them to date have been pretty solid but this one really isn’t my cup of tea. The veins on the foreground Alien are just a little too veiny in their phallic tones where the original art of H.R.Giger’s Aliens were more subtle in their sexual inferences. The hand placement on the foreground creature reminded me of a frozen Bela Lugosi which was entertaining but looked more tame than frightening.

There wasn’t much in the way of claustrophobic tension that I would have expected in entering the Alien hive. As the main plot point of the issue, the livestock originated ALPHA sample is depicted well but like the cover just doesn’t have the crescendo and fearsome factor of other Alien art such as the early Dark Horse Comics heavy black ink work.

There are big strides in this issue to push the story forward. Despite being a bit lighter on action than previous issues, there is a flowing momentum that helps elevate the danger the characters are in. Bishop’s functional android personality makes a great contrast with Cruz’s sombre and battle worn soldier disposition which helped me feel invested in the story. I really enjoyed the interactions between them especially in light of the early plot build of them being in a counselling relationship from issue #1.

What could have been big reveals were a little flat in what could have been a seminal fright moments for a Marvel taking the franchise by the scruff of the neck first arc. There are still many directions this story could take and overall I think Marvel may be feeling their way into stories and the genre for the future. It really is a tough fan base to please. They certainly have the clout to attract fans, writers and artists to collaborate on some great work moving forward.

This is very much a comic that takes place in the same universe as the early Aliens but it isn’t a story that is chained to their lore; the references are there for lovers of the franchise but they are like sprinkles of connection rather than heavy investment. Johnson provides us a more psychological and historic trauma insight into Cruz’s past life and how it affects him in this present rescue mission.

Marvel titles garner wide attraction and new generations may find their way into the joy of the Alien franchise through this new branding. Some older fans may be quick to criticise this story arc finding it a bit short on its teen + promise. I expected a little more horror out of it. One thing is sure with a month between issues there is no shortage of historic material to keep us rolling in Alien stories.

An expansive story for an ever expanding Alien universe.