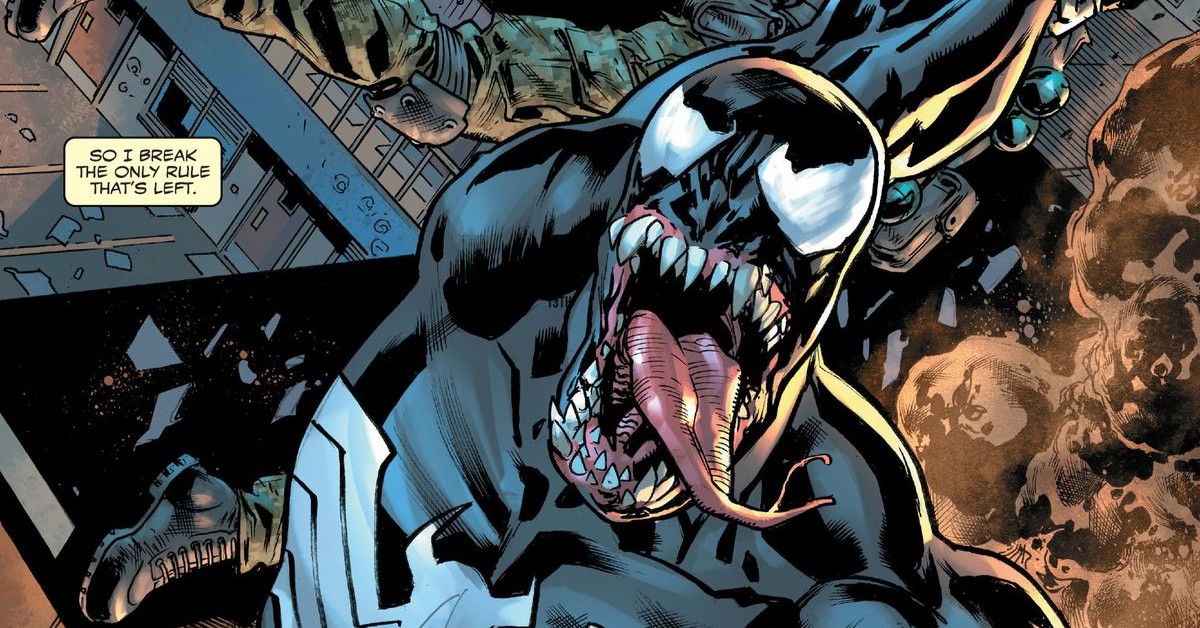 A NEW ERA OF VENOM STARTS NOW! OR MAYBE IN THE FUTURE!

After the events of King In Black, Eddie Brock is now the god of the symbiotes and is able to transfer is mind through any symbiote he wishes to complete his new intergalactic duties whilst he resides back on earth, ll. In the meantime, Eddie’s son, Dylan has taken up the mantle of Venom aswell as getting into multiple brawls at school: threatening his place there. To make matters worse, Dylan barely sees his father anymore since he’s out saving the universe up in space. So when he finally gets to have some time with his dad again, you’d think it’d be a happy occurrence but instead, Eddie gives Dylan a call after they had a disagreement except that this wasn’t the same Eddie. He tells Dylan that the one in his house is NOT his father and that he should meet the REAL Eddie at a motel some other place in town.

After this we cut to Space. Where our new god of the Klyntar investigates a ship that’s possibly been taken over by some skull looking robbers. Eddie’s got with him a group of four symbiotes (assigned the names John, Paul, George and Ringo [ha ha]). Everything goes just swell until Eddie gets a telepathic message from “George”. Once he traces the message to its source he finds the crew of the ship, Slaughtered, with George stood on top of them with red eyes. He then says he brings a message from the future and that he won’t have a seat on the throne for much longer before crumbling to dust.

Now we return to earth. Dylan packs his things and makes his way to the motel with sleeper (another symbiote that has taken the form of a cat). Eddie sits in his room and questions himself. He thinks that if he can go anyWHERE he wants, why can’t he go anyWHEN? And so in a split second, he slips through time and space, and us faithful readers get some epic glimpses of what’s to come this volume. We see images of Kang the Conqueror, a venom hand where the fingers are…candlesticks? And a new character that looks an awful lot like Toxin called Bedlam. Very cool stuff.

As Dylan approaches the motel it EXPLODES as the police (?) Attack and VENOM IS UNLEASHED. The art in this sequence is really great, when I heard Bryan Hitch was going to be on the book I was worries it wouldn’t be quite a fit but I was totally wrong, it. Is . Awesome! In particular this super-sweet double splash pictured below. As venom continues to battle the police, Eddie is fine as he shifted through time before the room exploded. He ends up in a beautiful place with purple trees and red mountains. A voice appears, it tells Eddie not to talk, it would be impossible whilst his atoms reform and introduces himself as Meridius, welcoming Eddie to his “garden” at the end of time.

So wow, this is a lot to unpack. Dylan Brock is now venom, Eddie is protector of the universe, not only that but he is currently confronted by an unknown being at the end of time itself. When I put it lime that it sounds crazy, which is good because I don’t want to read a venom comic book that isn’t crazy. I had a lot of fun reading this book and I got a certain feeling, it’s like that feeling you get from a movie like fight club or a game like the last of us, you just don’t want to leave! It’s so interesting that you just want more, and unlike those pieces of media, Venom comes out every month. It features solid writing with just the right amount of angst and fantastically intricate artwork. Buy it! It’s good!