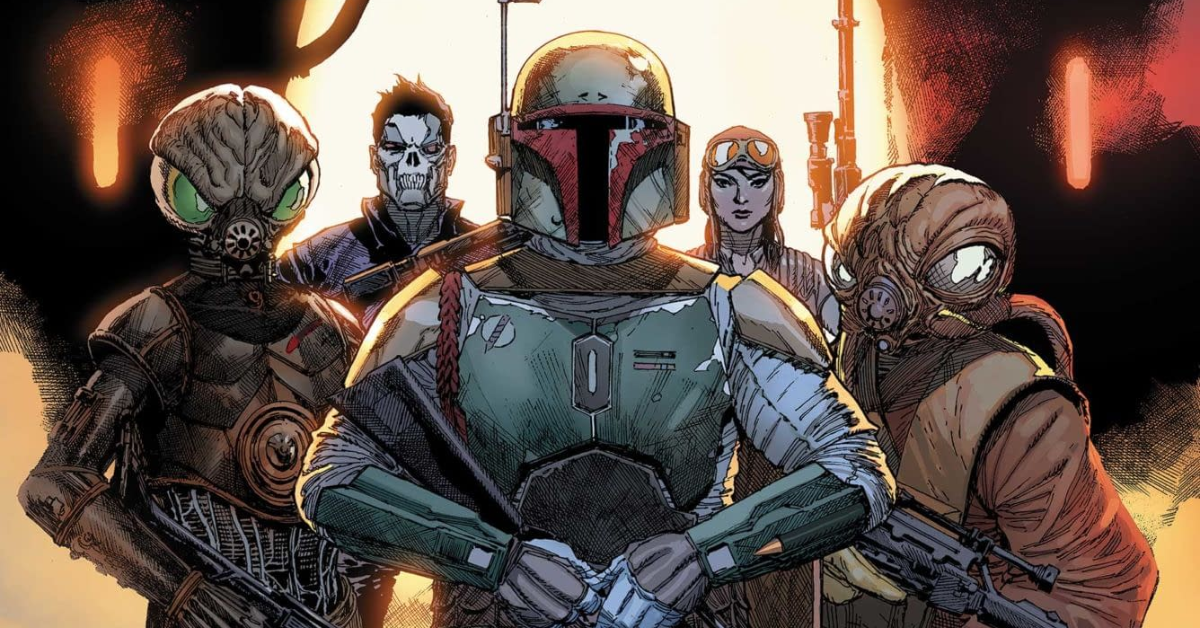 The second half of this year has seen Star Wars fans treated to some of the most exciting, surprising, and epic storytelling that the comics have had to offer. As the massive War of the Bounty Hunters event comes to an end, we take a look over some of the final parts that close out this sprawling, 34-part behemoth from Marvel Comics.

First up is the fifth and final issue of the core mini-series, which truly delivers on the ‘War’ of its title. Panels are chock full of space battles, laser fire and things generally going ‘BOOM!’ Luke Ross’ art and the truly unique colours of Neeraj Menon have been the standout aspect of this series and they give their absolute all once again in depicting the massive scale of this final hurrah, ably assisted by David Messina and Rachelle Rosenberg respectively. Each page leaps out at the reader, the layout of most of them making for fast-paced reading before indulging in the occasional impactful larger panel or an astonishing splash page to really grab the attention. Here’s hoping they both return to the Star Wars universe before too long.

This is one jam-packed comic but that doesn’t stop almost every key player in the event having their moment in the spotlight to wrap up their involvement. The highlight is, as ever, Boba Fett, and his team up with cyborg bounty hunter Valance is beautifully pitched by Charles Soule, who continues to prove to be one of the best writers to ever grace the pages of a Star Wars comic. This issue, he delivers stunning character moments in rapid fire fashion interspersed with frenetic action, but the speed at which they come never reduces the impact or importance of each one, some of which will lead on nicely to be paid off in each character’s respective book.

There is, of course, also a huge teaser for the upcoming Crimson Reign mini-series, the second part of Soule’s Qi’ra trilogy. Soule has given new life to a character who could easily have been forgotten and ignored, given the underwhelming reception of Solo: A Star Wars Story – he has seized a golden opportunity to do exactly what Star Wars books and comics are supposed to do: make something much bigger of the comparatively tiny part of the story that the films make up, and he does it convincingly. Qi’ra’s return has been fully justified in this event, and her final words here promise intriguing things to come for the new leader of Crimson Dawn in the upcoming mini-series, Crimson Reign.

Considering the events of his own book and the core mini-series, Greg Pak is left with a lot to wrap up here, but he handles it with an eye on pace and detail, which have both punctuated his run from the start. A lot of ground is covered – the conclusion of Vader and Luke’s chase, the ongoing scuffle between Ochi and Sly Moore, Vader’s confrontation with Bokku the Hutt and, of course, setting the scene for what comes next, but every aspect of this issue stands well on its own and as part of a cohesive whole which makes for a very satisfying issue with a shocker of an ending that makes Crimson Reign an even more enticing prospect.

Raffaele Ienco’s art is as great here as it always is – cinematic in its scope, but intimate and detailed when it needs to be, even when dealing with the featureless blackness of Vader’s shiny bonce. Ienco never puts a foot wrong, giving us what quite simply looks like a Star Wars movie in pencil and ink. Alex Sinclair takes over colouring duties – he handles the blacks, dark greys and washed-out blues the make up the colour palette of the Empire with skill and then cleverly slips in one panel of bright, alarming neon in one of the final pages, just as the rug is pulled from under the reader’s feet.

Next, Rooney Barnes and Guiu Vilanova bring us the last of the one-shots that have been peppered throughout War of the Bounty Hunters.

Given his merciless dismantling at the hands of Darth Vader, you’d be forgiven for thinking that IG-88 would be out of the game for good. However, Barnes resurrects him here in quite a sinister fashion, almost reminiscent of Frankenstein, with the ambitious engineer RB-919 getting more than he bargained for at the hands of his creation. The dark tone fits well with the unrelenting killing machine that IG-88 is supposed to be, with the art working effectively in tandem, focusing on the droid’s unnervingly blank face, his skeletal form often in shadow.

The tone changes ever so slightly for a showdown with Boba Fett in the closing pages, as everyone’s favourite bounty hunter just couldn’t be written without the overwhelming sense of badassery that pervades every page he features on. However, this is in no way jarring and works well with the dry humour that IG-88’s matter-of-fact dialogue brings to the table.

This issue slots neatly between the end of the main part of War of the Bounty Hunters #5 and its epilogue, acting as a nice little coda to the fight over who gets to keep the helpless Han Solo, and as a potential set-up for future reappearances from IG-88. ‘Born to Kill’ is the story’s title – let’s hope that, as far as IG-88 goes, it’s also a promise.

And finally, after 34 issues across 4 ongoing titles, a mini-series and several one-shots, we have the conclusion, presented in Star Wars #18 by the dream team of Charles Soule and Ramon Rosanas, whose work together on this run has been consistently brilliant.

That winning streak remains unbroken here, in a much more stripped back, action-free issue than this event has generally brought us. The linchpin of the book is a confrontation between QI’ra and Leia as the true nature of the former’s failed plan is revealed and they both reckon with Han’s fate and the hardships they have both been through in recent issues. Given the fact that one man’s whereabouts have formed the crux of the whole narrative, this was never going to be a chat that would pass the Bechdel test, but it’s fascinating and scintillatingly written nonetheless. Though Qi’ra does much of the talking, Leia only needs a few words to show that Soule understands her top to bottom. The same goes for Rosanas, who captures Carrie Fisher’s expressive cynicism beautifully.

The conversation also yields a flashback sequence to Han and Qi’ra’s childhood, before the events of Solo, living under the command of Lady Proxima. It’s only a handful of pages, but it has real impact on the issue, leading to a somewhat ambiguous conclusion to the conversation which leaves us wondering what Qi’ra might be capable of when it comes to twisting the truth and manipulating events to her own ends, something which Soule will almost surely expand upon in Crimson Reign.

By its very nature, Star Wars is massive in scale, and is only getting bigger and bigger as more movies, Disney+ shows, books and, of course, comics fill the pipeline and promise to further develop and intertwine the beloved characters that are spread throughout the galaxy. With that in mind, an event like War of the Bounty Hunters is a natural fit, and these final parts live up to that promise, whilst offering a real variety of styles, tones, and approaches – from chaotic dog fights in the depths of space to hushed, private character-defining conversations, from dark droid workshops to inhospitable ice planets, the sheer scope of just these 4 issues out of the complete 34 is seriously impressive and pure Star Wars.

Taken as a whole, War of the Bounty Hunters has been just that from the very start – the depth and scale of the storytelling, balancing both action and character, humour and high stakes, dark and light, across multiple writers and artists whilst remaining cohesive (aside from the occasional issue where the release schedule doesn’t seem to match the reading order) is an incredible feat. The inevitable arm-straining omnibus will make for a thrilling read to be devoured in one greedy sitting.