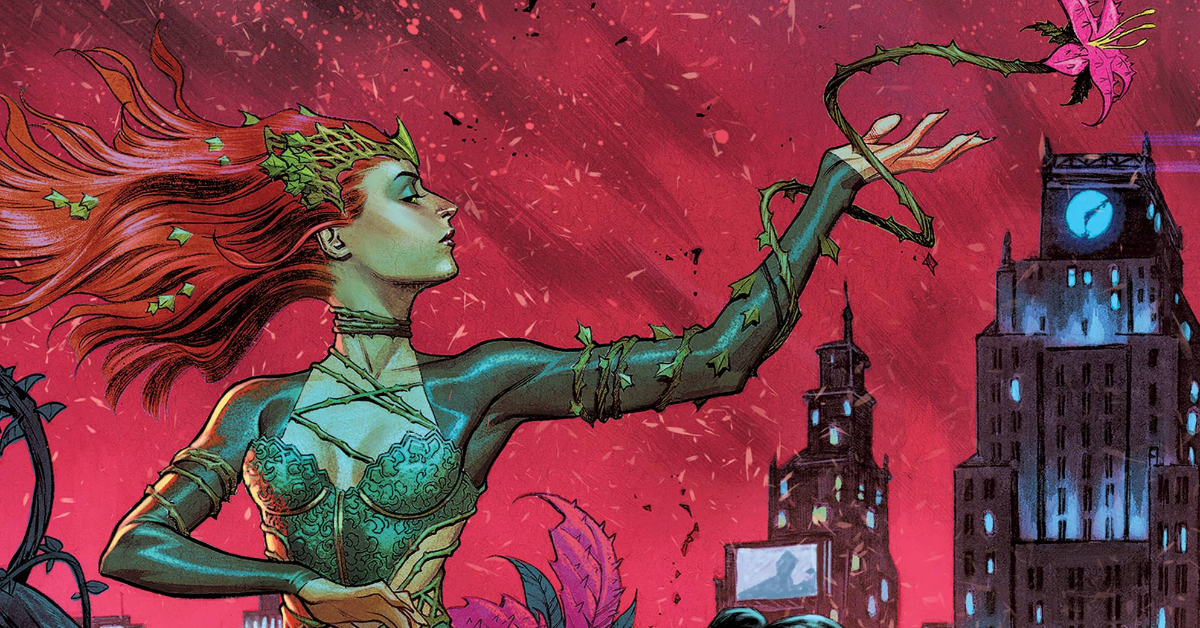 The Scarecrow prepares Sean Mahoney, AKA Peacekeeper-01, for the next phase of his plan. Batman and Miracle Molly hunt for the Mind Machine and the secrets it holds inside to prevent them being used by Scarecrow as a weapon. And Simon Saint diverts his attention from Batman to someone who might prove to be altogether more destructive.

I’m a big sucker for the artwork and colors by Jorge Jimenez and Tomeu Morey on this series of late. That’s why I have a hard time with more than half the pages in this issue, which have been taken on by artist, Bengal. Respectively, his work is perfectly fine here, but it would stand much better on its own. Unfortunately, matched against the complexity of the work that sits beside it, by Jimenez, it pales in comparison. I understand that artists need to share the workload from time to time just to give themselves a break, or even to give newer artists a piece of the spotlight, but each time a page pops up from Jimenez you are reminded of just how much better things can be. Even Morey’s colors don’t quite pop the same with Bengal’s work, perhaps because Bengal doesn’t quite give him as much 3D space to work with.

The cover to this issue, while nicely drawn by Jimenez (obviously!), is somewhat misleading as it depicts a scene of action from the story that never actually happens. I’m not a fan of those kinds of covers. There’s metaphorical and then there’s just flat out lying!

Fear State part 4 is one of those chapters of a story that kind of leaves every character in a state of limbo, where you are left with no certainties about what will happen next. And so, you finish reading it with only one question in mind, “Where do they go from here?” I guess we’ll find out next issue. Though I must confess I felt that, even with the psychological issues he’s been going through most recently, Sean Mahoney was all too quick to hop into Scarecrow’s chair without asking too many questions. I’m sure that’s all part of Scarecrow’s mind conditioning but, if so, it didn’t translate so well off the page from a writing standpoint.

The biggest point of interest for me right now is Poison Ivy. I’m really intrigued to see just how big a part she will ultimately get to play in this story. We keep getting told that she now has the power to destroy the whole city, even being given a callback to No Man’s Land and the level of destruction that was caused in that storyline. Will Tynion follow through on that promise or does he have something else entirely planned?

The back up story, “Batgirls Part 1 of 3: Clueless”, is a much more interesting affair than what we got at the end of the previous few issues. It has the Anti-Oracle, now calling herself ‘Seer’, toying with Barbara Gordon and her crew. In a few short pages, writers Becky Cloonan and Michael W. Conrad make me want to stay with the story, making good use of the intrigue that comes from not knowing the identity of one’s tormentor.

Tynion keeps his story moving at a fast pace but Jorge Jimenez is sorely missed throughout most of it.