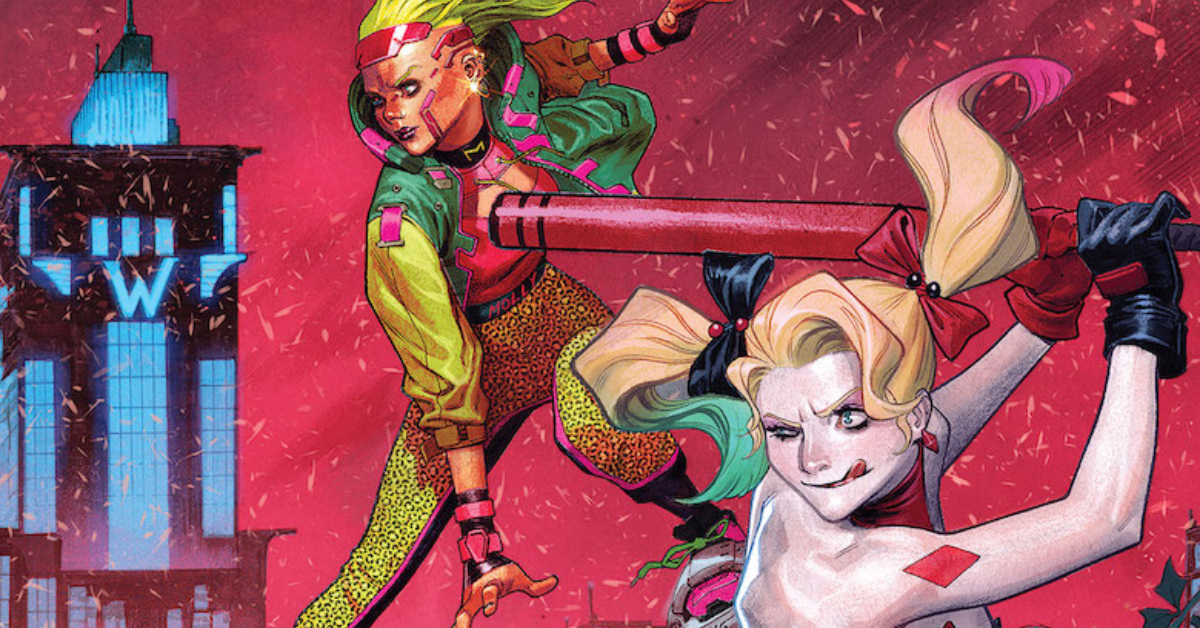 While Batman fights it out with Peace Keeper-01, so that Miracle Molly might stop Scarecrow from unleashing his fear bomb on Gotham, Harley attempts to reunite Queen Ivy with her better half.

After many months of buildup we finally get to the conclusion of James Tynion IV’s ‘Fear State’ cross-over epic. What he brings us is a story about free will and the resulting necessity of evil. In order for men to do good, they must have the freedom to do bad. One cannot exist without the other. This is something that Batman understands. We see it in his final conversation with Miracle Molly. Yes, he deals with the worst of people on a daily basis, but the knowledge that people are free to choose between right and wrong is ultimately what gives him hope. His primary battle then is the fight to bring those who live in darkness into the light even though he himself fights this battle dressed as a figure of darkness.

This theme of free will is explored further in a more metaphysical way with Queen Ivy and her other self, a copy created by Gardner, but consisting only of Ivy’s goodness. One is hardwired for self-preservation, whatever the cost, even if that means destroying all of Gotham. The other… not so much! But when the two merge, it is only then that Ivy becomes a whole person, capable of making a moral choice. I like what Tynion is going for here but, I have to admit, I am somewhat underwhelmed by the execution. Queen Ivy should not have been so quick to merge herself with the other Ivy. She is simply told that, “Hey, it would be really cool if the two of you got back together”, to which her response is essentially, “Oh, okay then!” At this point in the story she is a ball of rage, just about ready to annihilate the city, which better illustrates the point that Tynion is trying to make. So, to have her give in so willingly is far too anticlimactic. Harley and Gardner should have had much more of a fight on their hands in convincing (or even forcing) Ivy to merge with her good self.

Speaking of anticlimactic, one of the big villains of this entire ‘Fear State’ run, Simon Saint, isn’t even taken out of play “on screen”, as it were. No doubt most of that action all takes place in some other comic book that I’m expected to rush out and buy in order to get the full story. But I don’t blame Tynion for this. I have actually read some articles attacking Tynion for what many consider to be a lackluster ending to his run but I consider such attacks to be unfair in the extreme. For one thing, I don’t consider the ending we get here to be that lackluster at all. As I’ve already pointed out, at the very least, it has something to say and specific themes to explore whilst also wrapping things up. But I also consider it unfair to blame one man for a story that he’s had to write in such a way that the multiple other titles in DC’s Batman stable can slot their way into it. Such faults are the failing of DC comics in not allowing one writer, with a singular voice, tell their story without having to worry about what is going on elsewhere.

The final battle between Batman and Peace Keeper-01 is a satisfying one. I love seeing Batman turning his utility belt into a makeshift knuckle duster to even the odds. It’s a great visual that reveals batman’s confidence and ingenuity as well as his tired desperation. Jorge Jimenez’s artwork is also pretty awesome, with Batman’s broken eye piece in his cowl allowing that one eye to peer out from behind it, reminding me of the ‘Gotham By Gaslight’ version of the dark knight. The final conversation between Batman and Miracle Molly is also a nice moment, allowing us to see a lot more light in a character known for being the dark, cave dwelling vigilante.

At the end of this issue’s backup story, ‘Batgirls Part 3: Can’t Hardly Wait’, we finally get to see the person known as The Seer. It’s a disappointingly underwhelming sight to behold, as is most of the story itself, to be perfectly honest. Steph and Cass are hidden away for a few days in a dive of a hotel and that’s it! Aside from one creepy doctored image of Babs by The Seer, the artwork still irritates me and the story itself doesn’t really go anywhere. It just side-lines two characters for the sake of some “humorous” buddy antics, that I’m sure will appeal to teenagers, but which does nothing for me personally.

Verdict –
The final chapter of ‘Fear State’ serves as an examination on free will and the necessity of evil in a world filled with good people, while the Batgirls fail to impress, in a story that sees them side-lined.