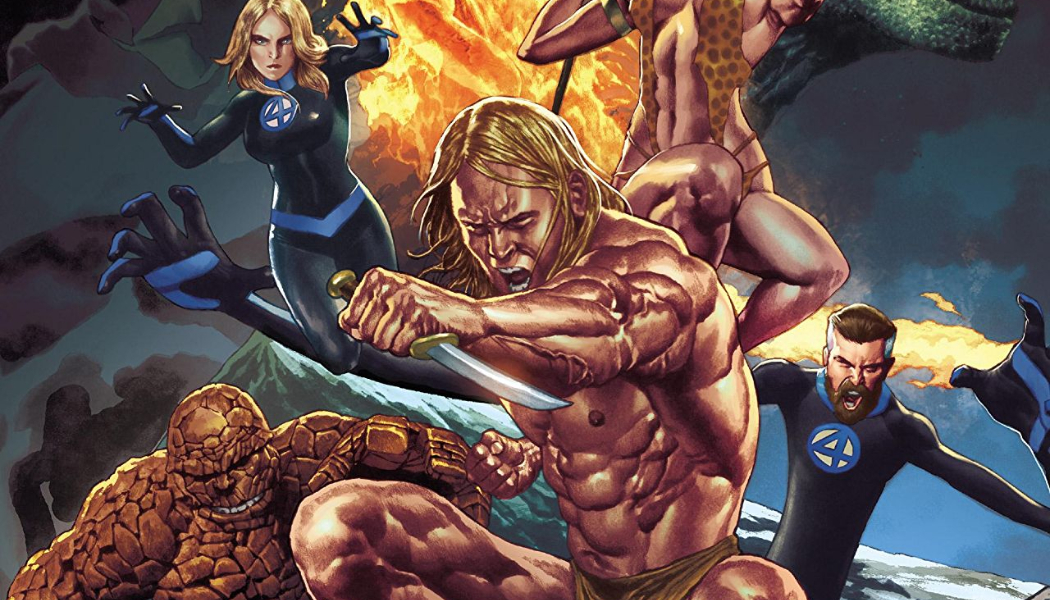 Back in the summer of 2019 when comics were plentiful, the Marvel universe welcomed Prah’d’gul (or Prodigal according to mishearing Ben Grimm) in three one-shot comics where our young visitor from space bumps heads with three of Marvel’s mainstream titles.

First up it’s the Fantastic Four, who at the time of publication had only just returned to Earth after a few years of unpublished adventures in an alternate dimension and were busy settling into the early stories of Dan Slott’s excellent monthly run.

Prodigal crashes in the Savage Land, a prehistoric jungle hidden in the Antarctica much loved by the X-Men and populated by Dinosaurs and various warring tribes of pre-agricultural types. Our hero barely has time to pull a dramatic pose before he’s eaten by a T-Rex who must lie in wait for crashing spaceships, so often do they occur in this supposedly secluded paradise. (This is a great recurring gag in Brian Michael Bendis’ New Avengers. Pause while I go and re-read the first few issues.)

Unfortunately for Rex, Prodigal is hard mouthful to swallow and he’s quickly exploding his way out and being proclaimed a God by the locals. This suits him fine and he’s soon got his new congregation looking for a replacement spaceship and stirring up trouble with the neighbouring tribes. It’s a quick start, but one-shots don’t let you hang around and soon enough Ka-zar and Shanna, the underdressed Heroes who rule the Savage Land, have got the FF on the phone asking for help getting rid of the troublesome interloper. Cue action.

Peter David knows his game and keeps the script light and frothy with plenty of jokes. The classic superhero meet-cute fuelled by misunderstanding and bravado is played for laughs but soon begins to wear thin. It’s all a bit one-note and silly and Prodigal mainly comes across as an arrogant jerk complete with annoying catch-phrase. Unfortunately, the limited page count doesn’t give him much opportunity to redeem himself. Perhaps in the following instalments we see a bit more of his character. A bit of mystery would have been welcome too.
There’s time for a touch of perfunctory back-story but the few lines we get doesn’t sound that original or exciting. Mostly this is all just an excuse to showcase Prodigal’s fairly conventional superpowers, which in world full of superheroes isn’t that interesting. Even the Fantastic Four don’t really get that much to do. Reed and Sue get a few nice moments but The Thing and Human Torch are barely in it. I think Johnny Storm gets one line.

Francesco Manna art is solid and dependable if a little short on the spectacular. Again, I think the limited page-count doesn’t give him a chance to really shine. There was a real missed opportunity to draw an exploding Tyrannosaur, which I’m sure he would have enjoyed. But no room for it. Shame.
Next up for Prodigal it’s back into space and if the cover is to be believed it’s a zero-gee dust-off with the Silver Surfer while a ringside Galactus places his bets before a final meeting with the Guardians of the Galaxy rounds off the trilogy. After that, who knows? Did Prodigal become a regular somewhere? Did he become interesting? Maybe I’ll look online to find out. Then again.

Verdict
Mostly fun but ultimately a conventional intro for a conventional character. Prodigal didn’t really excite and I don’t think the FF gained much by being in it. Next time Ka-zar calls you Reed, send the reserves and save yourself the bother.