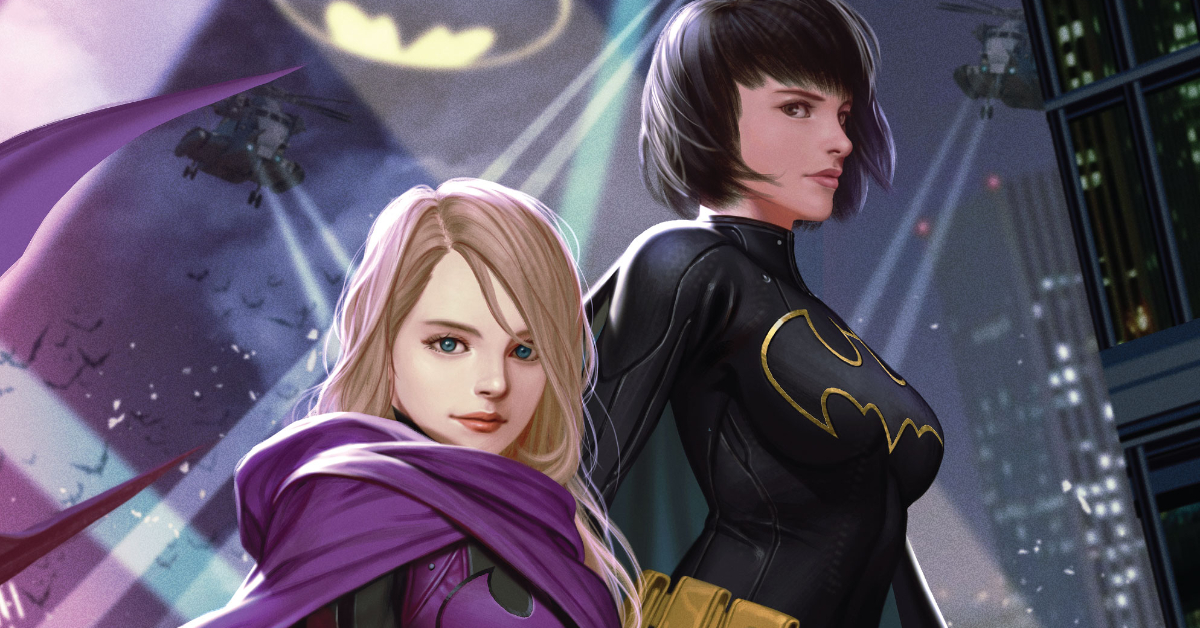 Described on DC’s website as “the pizza slumber party you don’t want to miss,” this new six-part series by writers Becky Cloonan and Michael W. Conrad is filled with the kind of energy you’d expect to see at, well, a teenage girls’ slumber party!

Ever since Batgirl Cassandra Cain handed over the reins to Stephanie Brown (who, as Spoiler, kicked back teenage-rebellion-style at her criminal father the Cluemaster), fans have been eagerly awaiting a team-up of the two friends. Under the watchful eye of Barbara Gordon, the three move into an apartment on the outskirts of Gotham, away from the mysterious Seer and, hopefully, any criminals who might test their combined strengths. This being Gotham, it isn’t long until Cass has to take down a gang of thugs, leading her and Steph to a hide-out where they kick butt and face down a group of workmen who appear to be under some kind of hypnotic spell. Throw in a spate of murders and a suspicious looking neighbor, and it looks like the Batgirls’ plans for a discreetly led life are going to be short-lived.

This is a comic that will certainly appeal to younger female readers who will instantly identify with the personalities of the three main characters: in Cass we have the quiet, thoughtful one who won’t take things lying down (a nod to her backstory as a trained child assassin); Steph – dressed in her Spoiler costume — is the impetuous, fun-loving one; while Babs/Oracle is the level-headed leader of the group who tries in vain to keep her two friends from exposing themselves to the criminal underworld. Cloonan and Conrad know what make girls tick (or, for that matter, any teenager whatever their gender): Steph is as enthusiastic about who gets first dibs on the top bunk as she is about accompanying Cass on a crime-fighting night-time excursion, and the comradeship and excitement of three friends moving in together is shown through simple pleasures like sharing meals, goofing off and the freedoms offered by living independently from adult male interference.

As a father of twin 11-year-old daughters, I was completely onboard with this comic; it doesn’t patronise the target audience, the ear for dialogue is deftly tuned in to how teenagers actually speak, and the affection the characters feel for each other is beautifully realised through Jorge Corona’s impressive artwork; he captures the attitudes of the three perfectly, making them recognisable through a series of sideways glances, defiant scowls, and hesitant expectation (in one page, wherein Bab’s excitement at revealing the bat-bikes is matched by Cass and Steph’s disappointment on seeing them, the individual characteristics are illustrated so effectively, the scene would have worked even without dialogue). It’s also to Corona’s credit that he doesn’t resort to the anime-like frenetic expressions (jumping up and down, arms waving, etc.) that can sometimes render teenage characters silly; these three are all-business, albeit with a streak of fun.

But enough of this old man’s ramblings, this is what my daughters had to say about Batgirls #1:

“We liked Cass and Steph the most, and the bit with the bat-bikes was really funny. The story was gripping and the way the girls spoke was really cool, especially Steph’s sarcastic “Decisions, decisions” when Babs offers her a choice of Pot Noods or Pot Noods. Looking forward to the next issue!”