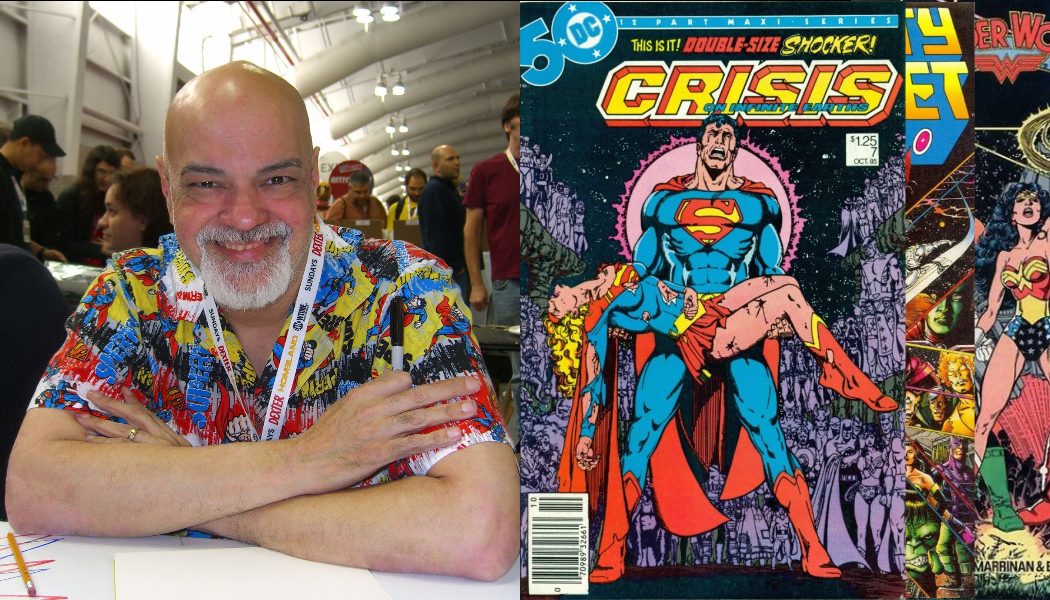 A dark cloud has been cast up comic fans from all across the globe recently with the sad news of the impending retirement of the great George Perez.

If the retirement were under better circumstances for George then we have no doubt the same bravado would ensue, but alas it is not the case as it has been forced upon him by way of ill health. Tragically, it has become clear that it does not appear to be getting any better and one week ago CGC announced that on the 31st of January, George Perez would be holding one final, all be it private, signing session.

The impact and influence of George’s work upon the industry is legendary, his stories have become timeless classics and perhaps most impressively of all, many of the characters that he either created or redefined are still considered by many to be the definitive or standard setting versions, something that is backed up often in TV/Movie adaptations in recent years.

This is the start of a short series of articles we will be doing looking at some of our favorite elements from his most popular works. We are looking today at our seven favorite classic covers this time, perhaps an artists best way of becoming a household name of course is doing a classic cover, and George certainly knows how to set us up with something alluring to behold on the shelf, so lets take a look…

Perhaps its that totally awesome logo, or that mad dash out of the page that Logan and Jessica are doing in a remarkably Kirby-Kamandi like manner (Michael York-Mandi?), but anyway this cover has imprinted on many a readers memory. A fun little run too, if you like that kind of thing! We do!

Iconic to the core. Having all the Titans on the front was always a must, but that badass arrangement around Raven coming towards us as the poor green skinned cannon fodder that’s about to be pummeled would have been an eye catcher for any punter in the shop that day looking for a bit of new DC action.

Just look at thing thing… I mean, flash forward thirty odd years and look around at the marketing used for the MCU, the designs on packaging for toys (good ones) and all manner of other things, this really has aged beautifully. Possibly more widely known now that it ever was back in the 90’s, its George’s ability to cram so much, so clearly and without any offence to the eye on any cover that continues to astound today.

This one may have as much to do with the story than it does the cover art. Without giving much away ‘Who Killed Myndi Mayer’ was a great arc that came at just the right time in the Perez run, with us witnessing Diana’s continuing struggle to find her own moral compass within a confusing new world, and on the back of the grim murder of her eccentric and controversial publicist. This mock newspaper cover was just the right tone needed to carry the story forward, and always sticks out when flicking through the run and brings us to a brief stop, as we pull it out and go “Ah yes… Who was it who killed Myndi again?”

What needs to be said, arguably it doesn’t get more iconic than this. Its always been his most dramatic cover, that’s for sure. First we have that gut wrenching and hopeless pose from Superman, then there is the fact he’s holding his (spoilers) Supergirl, his dead cousin who is drooped in his arms with what on an initial look would be quite graphic injuries for a Superman feature cover from DC 1985. Then finally you have the wave of characters who mourn in the background, silhouetted like an army of the dead. It stinks of failure. Its perfect.

There were lots of quality stories going on within the New Teen Titans, but one that was perfectly reflected by its cover was that of issue #39.

Kid Flash, or Wally West rather, formally announces that he is leaving the team and soon after Robin announces that he too is giving up being Robin entirely. It has some subtle emotional twists in the narrative, and despite not being a true classic, it certainly delivers. Much like the cover, which reflects the narrative within really well. You are very much left with an empty feeling, possibly even upset upon finishing the read, and so when turning back to the cover Perez gives us a perfect summery. No background, no jokes, no care or nostalgia for their uniforms at all as Robins costume conveniently hangs rather ominously from the Titans logo. Dramatic indeed.

I’ve read this run several times and I can’t for the life of me remember what part of the story this covers, however, it matters not. Just look at the cover. Perfectly capturing what feels like the essence of a character in one image. There are loads of brilliant Perez covers in his Wonder Woman run, many with Diana in battle of course, but this one stands out in particular for that incredible expression of harmless joy and the striking angular T pose as she leaps high above her home. This run had its really dark moments, but Perez knew how to treat us with iterations of these characters that we genuinely felt happy for when they were totally happy, and rare times they were indeed. It was the 80’s…