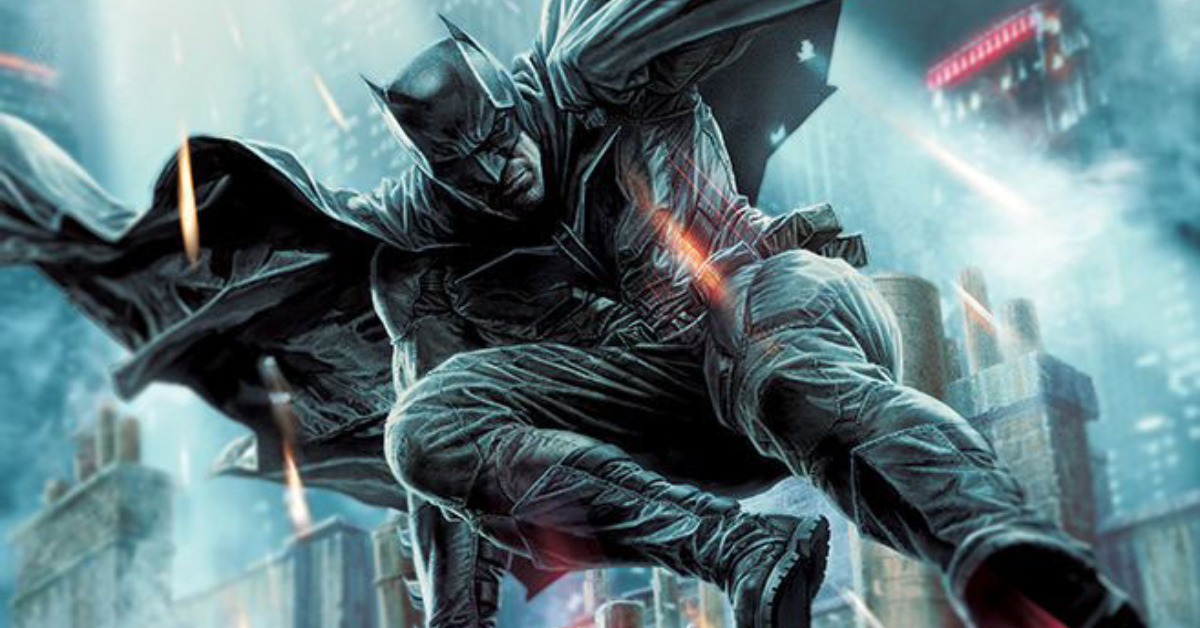 In the final part of writer Mariko Tamaki’s story, ‘Nakano’s Nightmare’, Mayor Nakano must put aside his differences with Batman so that the two men might destroy the parasitic virus, originally unleashed by Hue Vile, which has been terrorizing Gotham. Then Stephanie Phillips delivers part two of ‘Foundations’, which sees Batman chasing down a deranged man intent on destroying any chance of rebuilding Arkham Asylum, only to be confronted with a surprise visit from a former member of his rogue’s gallery.

I’m glad to see Tamaki’s story finally being brought to its conclusion. Truth be told, this particular run feels like it has gone on a lot longer than it needed to, with a somewhat muddled direction. It started out with an interesting new villain in the shape of Vile, who was then sidelined to make way for Mr Worth, only to fizzle out here with a giant monster that is ultimately destroyed in such a way that ties it directly to a particular moment in time during the whole Fear State climax. This would all be fine, except it really does become very confusing to work out what has happened when, and why the events that have happened elsewhere in DC’s Batman comics haven’t had more of a direct impact on each other.

It’s next to impossible to see how everything that has been happening with Scarecrow, Simon Saint, Peace Keeper-01 and Miracle Molly, over in Batman, could possibly be weaved into all the story threads that have supposedly been happening at the same time over here in Detective Comics. It seems to me that Tamaki’s hands have been tied by the whole Fear State thing, and so we get a story that is fighting for its own identity, whilst being hampered by the need to tie in to the bigger picture.

Ultimately, having Nightwing show up at one particular point in the story is a big mistake, as this was Batman and Nakano’s story. It should have stayed that way. As it happens, I do like the character of Nakano, and the direction they seem to be heading with regard to his and Batman’s relationship is something that has been sorely lacking without the presence of Jim Gordon. This should begin to fill that void quite nicely. Although, yet again, I am reminded that certain information that Batman gives to Nakano surely should have been the very thing that got Bruce Wayne released from prison a considerable number of issues back. How does Nakano NOT know this already!

Despite my mixed feelings across this whole story-line, I would love to see Tamaki continue on Detective Comics now that she is free from the shackles of ‘Fear State’. Let’s see what she can do when she is allowed to remain self-contained. Also, Dan Mora’s artwork has certainly been a highlight throughout this run, so I would be more than happy to see him stick around.

With ‘Foundations’, writer Stephanie Phillips poses the question, “Is Arkham Asylum truly worth rebuilding?” After all, it can hardly be noted for it’s stellar track record in releasing flocks of cured patients back out into the world, ready to contribute to society. It’s a nice little page-turner, which has the feel of something that might have appeared within the pages of ‘Legends of the Dark Knight’, back in the nineties. As I read it though, I am struck by the thought, “what if Bruce Wayne put all the funding into a place like Arkham, making sure to hire the best mental health practitioners in the world?” Instead of dumping people like Scarecrow and Joker into Arkham, only to wait for their inevitable breakout, Bruce could use his resources to take a more active role in their recovery.

The end to Mariko Tamaki’s contribution to the ‘Fear State’ saga really does feel like a long time coming, perhaps ending with more of a, “meh”, than a, “hurrah”. But it sets up some enticing prospects for the future, whilst the second part of Stephanie Phillips’ ‘Foundations’ poses an interesting question, which only leads to more questions (in the best possible way).