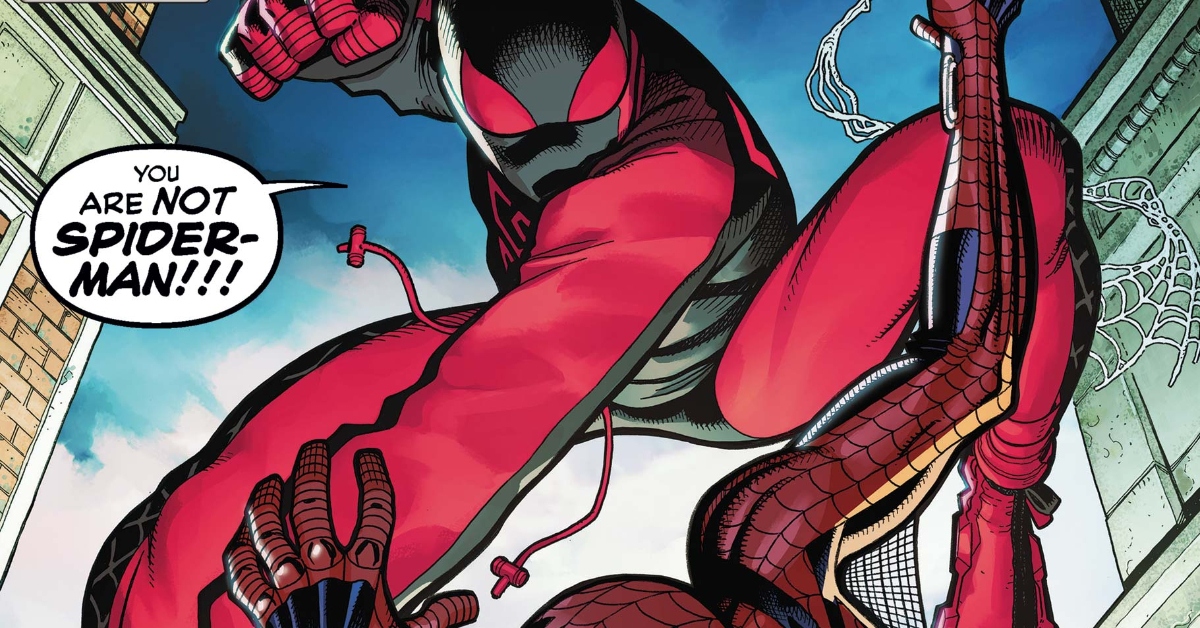 One of the most anticipated chapters of BEYOND is finally upon us! The two rookie Spider-men collide in one action packed issue with a brand new creative team of Saladin Ahmed and Carlos Gómez.

This issue starts with (I believe an introduction of a new villain) Rhizome being spotted on the loose in Brooklyn. I’ve attempted to do some digging and it looks like this is the first appearance of Rhizome which is a welcome addition. Just to have ANY new marvel villains in this day and age is quite a feat, the last time Spider-man faced a new villain was Kindred back in 2018! Hopefully we get more new villains in Spidey’s future, fingers crossed.

As Ben and Marcus (Ben’s supervisor) discuss their plan to attack, Marcus brings up the fact that since its in Brooklyn, there’s a mighty high chance Miles will ‘swing’ by onto the scene, being the Borough’s resident web-slinger. Ahmed seems to really know how to give characters a personality, like most of the beyond issues, he manages to add in titbits of humor and depth to the character of Ben Reilly. Like in the introductory scene, we get some nice quips and when asked to enforce the Beyond trademark on Miles, Ben is weary but still accepts. Little pieces of characterization like this makes the characters feel more real and show readers Ben isn’t just blindly following Beyond’s orders. This is also been building up throughout the storyline which, by the end, I’m sure Beyond will be exposed and/or put out of commission by the friendly neighborhood you-know-who.

A character I really love in this Spider saga is Janine Godbe. She’s Ben’s girlfriend and she’s an interesting, 3-dimensional person. She first appeared back in the infamous clone saga in 1995’s Spider-man: the lost years, she’s had a complex story involving her having to take her own fathers life . After the clone saga ended however, Marvel figured that to tie up a loose end, they’d just throw her in prison for her justified crime (see why its justified in the said 90’s mini-series, its really good!) And practically shelved the best new character of the clone saga. But now, she’s back in the mainstream Spider-man series and it’s always fun when she shows up. Anyway, apologies for the tangent. Ben checks in with Janine and takes off to Brooklyn.

As Ben makes his way to the scene, he showcases his awesome Spider-wings that actually make him fly, which is totally awesome. Once he gets to the area of destruction, he discovers that Rhizome is nowhere to be seen and that’s when Miles shows up on the case. After Miles realises Ben isn’t the Usual Spider-man doing the rounds, they have a cool little sparring match which showcases each others abilities , since they’re both semi newcomers, they’re pretty evenly matched and the fight only ends once Ben blurts out Peter’s name, showing that he is connected to the OG Spider-man. Ben and Miles talk it out and find that they had actually met in Spider verse/Geddon. The both of them do some duties around the block that was damaged and save a few lives, deciding to team up and find the loose Rhizome which Ben manages to do with ease due to Beyond’s advanced tech.

The fight with Rhizome goes down pretty swiftly with the two Spider-men using a combination of Ben’s webs and Miles’ venom sting to take down the force of nature which, in actuality, was just a guy in a fancy suit supplied by an enemy Miles knows called “the Assessor”. This serves as Miles exit point as he goes to track down the Assessor and whatever other juiced up villains he has on hand with Ben and Miles making a friendship and the former doesn’t attempt to give Miles any kind of warning. The fight was beautifully drawn by the hugely underrated Carlos Gómez who has done some amount of work in almost every marvel book you can possibly imagine. The guys art leaps of the page and has so much energy in it, it makes the issue go so much faster and has you missing it once its over, brilliant stuff.

Thus issue concludes with Ben receiving a Scolding from Head of Beyond, Maxine Danger which results yet another Beyond lecture on how the company has poured so much resources into him and Janine, (the Beyond lecture may actually become a villain of its own so make sure to buy five copies of the first time Ben Reilly’s most dangerous foe appears!!!) These things never seem to get through to Ben however and I’m sure he’ll continue in his rebellious, good hearted ways. As an epilogue, Maxine is revealed to be holding a jar of the material Rhizome was made out of, this might mean that Maxine danger planned the villain to break free and unite Ben and Miles? Or maybe it even means Danger herself is the Assessor, which would give Miles a far bigger part in the story. All interesting stuff!

This issue of the Amazing Spider-man lived up to its well deserving title. Exciting and mesmerizing art coupled with an edge of your seat script make a stellar issue of the webbed wonders adventures. Be here soon for an oddball tale of a problem in Peter Parker’s medical ward…