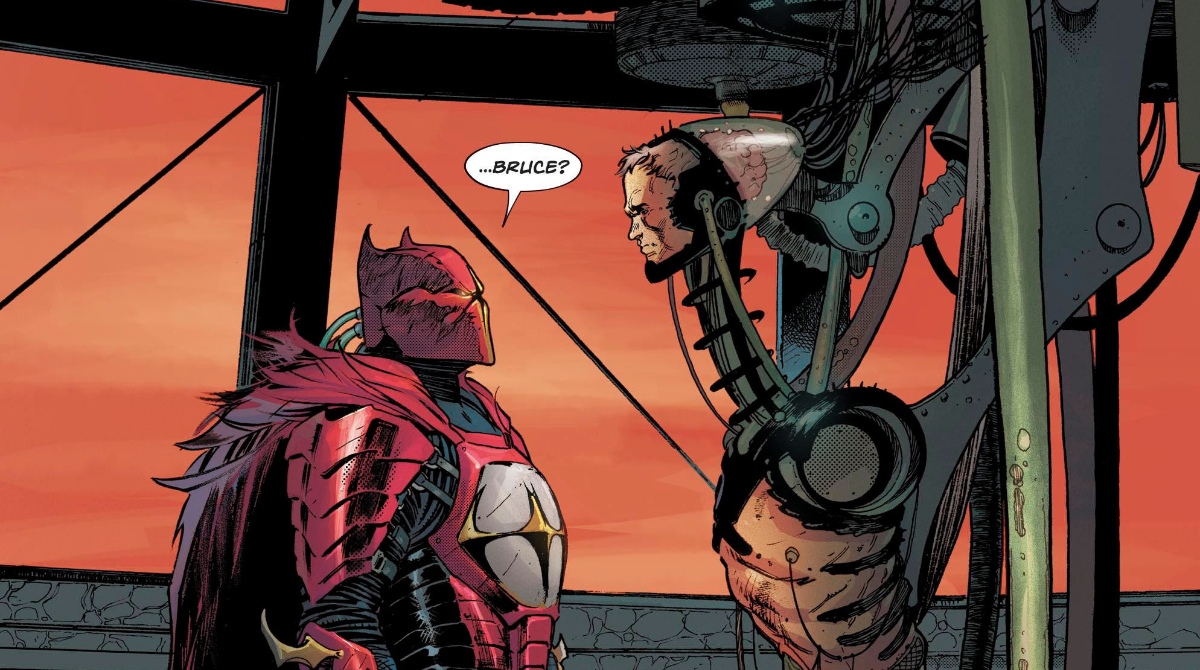 The first single issue comic book that ever I bought, as opposed to a collected edition graphic novel or movie adaptation, was issue 19 of Batman: Shadow of the Bat. It featured a man named Jean Paul Valley, wearing a brutal looking variation of the dark knight’s costume, traipsing around like he was Batman. I was so offended by this notion that I scratched a mark across the front cover of that very comic book. Little did I know at the time, that the long running story-line (Knightfall, Knightquest and Knight’s End) of which that issue was but a fraction, would go on to become one of my all-time favourite Batman stories.

Something else I didn’t know at that time was that the man parading himself around as Batman, Jean Paul Valley, would go on to become a huge part of my life as a comic book reader (I own all 100 issues of the original Azrael comic book run and have written a rejected screenplay for an animated movie featuring the character’s origin story). So it goes without saying that anything featuring links to Knightfall, in particular Jean Paul and Azrael, peaks my interest big time!

Tales of the Dark Multiverse: Batman: Knightfall #1 is part of a 10-issue series that puts a new spin on some of the biggest events in DC comics history, by looking at them from alternative realities, where all the wrong choices were made. In the case of this particular story, Bruce Wayne’s Batman did not defeat Jean Paul Valley at the climax of Knight’s End, leaving Jean Paul to wage a religious war against crime for thirty years in Gotham. The result is catastrophic. Without his defeat at Bruce’s hands, Jean Paul’s instability has brought ruin to the city, whose people are now divided into two camps: those who worship “Saint Batman” and those who secretly yearn for someone to save them from Jean Paul’s tyrannical rule. That possible salvation comes in the shape of a man claiming to be the son of the super villain, Bane, as well as the highly skilled martial artist, Lady Shiva. As they lead an assault on Valley’s forces it becomes clear that victory may depend on one man; Bruce Wayne, or what’s left of him. But can thirty years of brokenness be overcome by the former Dark Knight?

Writers Scott Snyder and Kyle Higgins do a great job here of capturing the flavour of the Batman comics from the 90’s. If you look at where the character of Jean Paul was at the time in which this story kicks off (a slave to “the system” seeing visions of “Saint Dumas”) then it’s logical to assume that the path he might head down would be not too dissimilar to what we get here.

There is a tendency, for anyone who isn’t named Dennis O’Neil, to write Jean Paul as a religious nut-job with a psychopathic personality. Check out a recent iteration of the character depicted in the pages of Legends of the Dark Knight for a prime example. But to do so is to strip him of all the growth he achieved as a character during the years that O’Neil was writing him after the events of Knightfall. It takes him twenty steps backwards and fails to understand what O’Neil was doing with the character. But Snyder and Higgins set their story at the perfect moment in time to justify taking Jean Paul down the kind of rabbit hole that most other writers should be trying to avoid. For this reason I am able to go on the journey willingly as we see what might have been.

Snyder and Higgins focus on one of the key aspects of Jean Paul’s character that O’Neil was always trying to explore, which was the fact that, Jean Paul’s father not really having been there for him means that he has got some serious daddy issues. He looks for approval from the closest father figure he has had in his life, which is Bruce Wayne, without being emotionally equipped to function beyond what “the system” has programmed him for. And so he remains locked in an internal battle concerning his own identity. That was always the journey of the character that O’Neil played out. The question of, “who am I?” constantly hung on Jean Paul’s shoulders. We find Jean Paul here having decided who he is, and yet still seeking that approval from Bruce, which will never be forthcoming. It makes him a tragic figure rather than a mere nut-job playing at being Batman.

Another key influence for Snyder and Higgins appears to be Frank Miller’s “The Dark Knight Returns”. It’s a cliché these days to name that particular work as an influence. But it’s almost inescapable. If you look at where we find Bruce’s Batman at the start of TDKR, we are given an almost plausible journey to show how he became that particular version of the Batman. It’s clearly not the same, but with a few tweaks here and there, it very well could be. Gotham City certainly looks ripe for a mutant takeover by the time we reach the end.

Javier Fernandez does a great job on the art work. I love his design of Jean Paul’s evolved Batman costume. It looks like a variation on his famous Knightquest costume, with a bit more medieval knight vibes added in for good measure. Another gripe I have, besides different writers tackling the character, is with different artists who’ve come to draw Jean Paul’s Azrael over the years and their purposeful attempts to simplify his costume. The original Azrael costume, designed by Joe Quesada, is quite simply one of the best costume designs in comic book history. The iconic Az-Bats costume of the “Knightquest” era is also a particular standout for me. So it’s great to see Fernandez putting as much care and attention into making something that looks just as iconic.

This book made me yearn for the days where Jean Paul was a part of my life each month. He’s never been a particularly popular character, no doubt due to the threat he posed to the mantle of the bat. But maybe it’s time for a reappraisal of the impact this character has had upon the legacy of Batman. And maybe it’s time writers like Snyder and Higgins were encouraged to bring Jean Paul back into regular continuity with a monthly title all of his own again. On the strength of this, I’d say he deserves it.

Verdict –
An absolute must-read for fans of 90’s era Batman comic books. Snyder and Higgins do a great job of re-imagining the ‘Knightfall’ legacy, without betraying the roots of the original story or it’s characters.