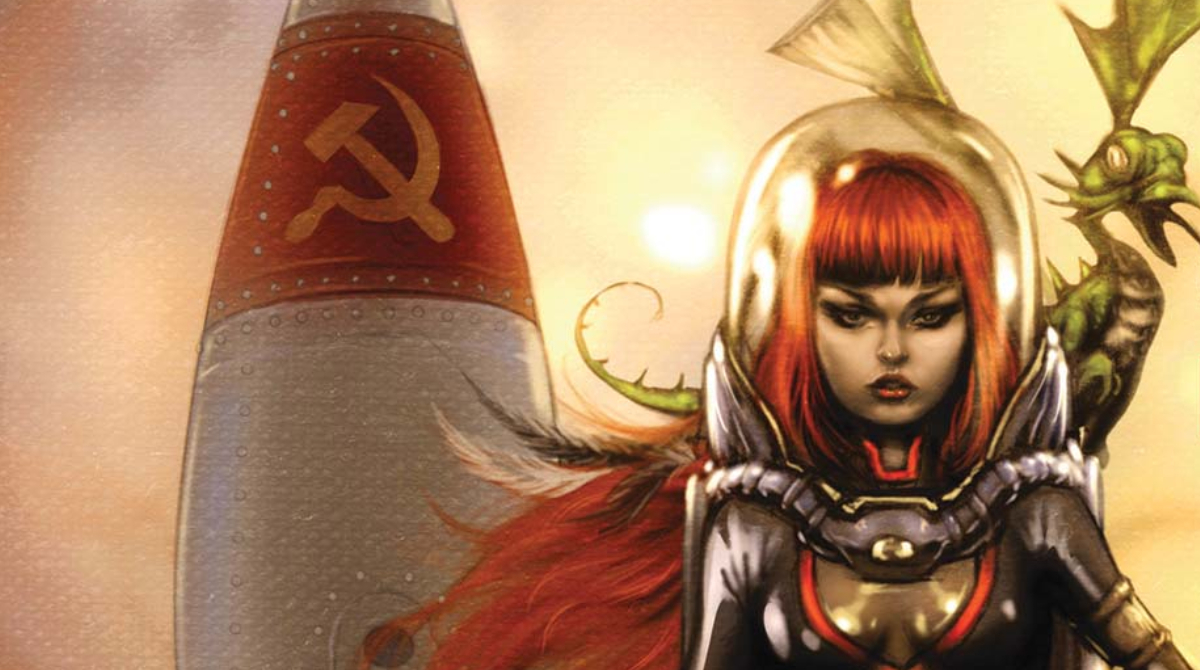 I keep coming back to the covers for Amazing Fantasy 1 and 2 over and over, just to enjoy them, to find new details, to appreciate the skill of their creator. This one’s no different.

Here we have Black Widow, framed by an unmistakably alien vista, the victor of a battle against strange foes. It’s a wonderful piece of art by Kaare Andrews, once again nodding to his influences while creating something suited to the modern age. There’s a strong retro-futurism feel here, recalling the work of greats such as Ed Emshwiller, Virgil Finlay and the fantastical cityscapes of Frank R. Paul. There’s more than a dash of Rodney Matthews here too and, as each of these fantasy and sci-fi greats brought us whole new worlds of incredible imagination, so too does Kaare Andrews with his cover art here. If there are any elements that draw you in, be it the gorgeous rendering of Black Widow and alien companion, the Soviet rocket ship, the strange structures on the horizon, then you would do well to not only check out this run but also investigate Andrews’ predecessors.

While each of the three primary covers for Amazing Fantasy so far have been worthy of the ‘amazing’ tag and very much stand on their own, they also serve to signal a comic story which places its characters in situations and settings which are several steps from the norm. While the atypical nature of Andrews’ title might be divisive when it comes to audience, there are enough familiar elements to ease readers into this new world and allow them to enjoy the adventure.

And what an adventure it is! The action moves at quite a pace now, and early in this issue Andrews’ establishes the drums of war as a central theme. Certainly tensions have been building as each of the three main characters find their feet in this strange new land.

Another familiar face from the Marvel universe makes her entrance proper while a young king, Black Widow at his side, makes a bid to avert the impending conflict. Meanwhile, Captain America (in full pulp hero mode) attempts to rally the tribe of the Cat People to act against instinct and tradition in order to defend themselves. Spider Man/Peter Parker remains with the people of Dragon Rock, who make their own preparations.

Add to all this, two other bestial tribes, both of whom chomp at the bit for conflict, and soon we hear the drums start; DOOM, DOOM, DOOM. Moments of court intrigue and quiet reflection are done. Now is the time for battle to be joined.

Andrews switches to epic wide panels to depict both the prelude to war and its main act, a technique which works to great effect, especially when paired with the repeated sound of drums, literally spelling doom. The action is enhanced further by Brian Reber’s colours, shifting here to a dark, hellish palette and so fully immersing us in the grim events facing our heroes. The writing is working well too, with tight dialogue and good characterisation. Kaare Andrews guides us through his ‘Island of Death’ with confidence and no small amount of mystery, supported throughout by some great lettering work from Joe Sabino, who presents the words clearly while respecting the artwork.

The story brings a good number of dramatic moments, reveals and twists; certainly enough to make for a compelling page turner. By the time we reach the cliffhanger ending, we are left ready to read on, to look forward to the next instalment. And, as the preview of issue four’s cover would indicate, yet more stunning art to appreciate.

Amazing Fantasy is a title I’d strongly recommend for anyone either intrigued by the lovely cover art, curious about the displacement of some key Marvel heroes, or who wants something a little different. As an added plus, this is a limited run and as such should be easy to track down and collect in its entirety. There are some great variant covers around for each issue too, so seek them out if you can!