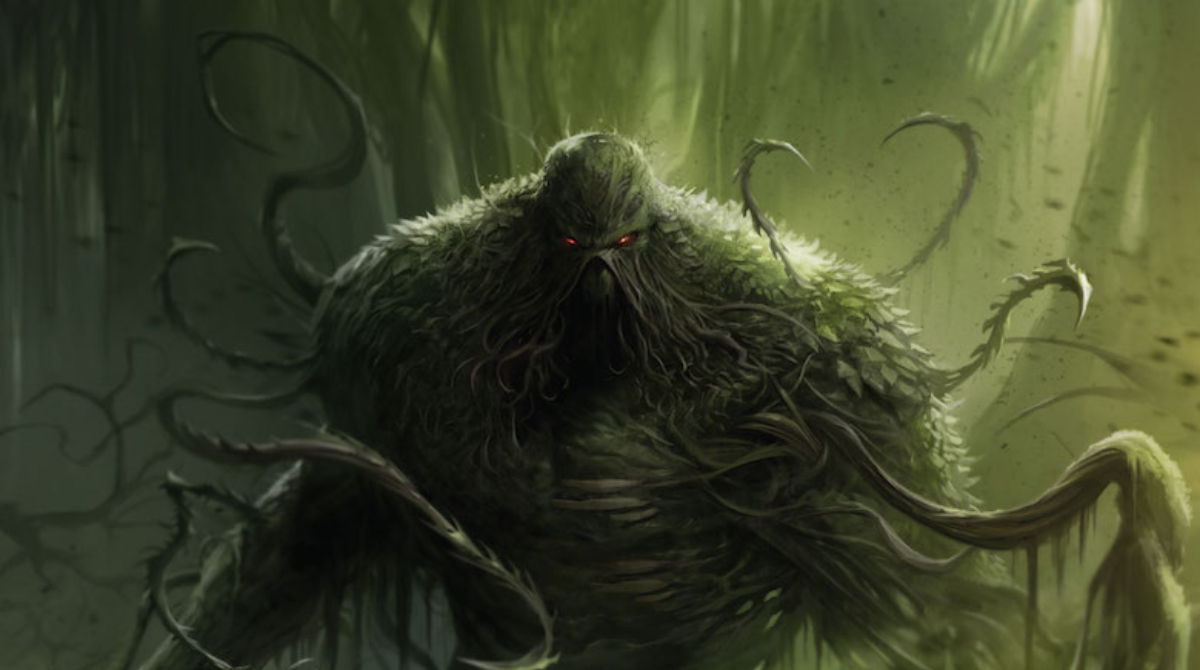 With the cover of issue 8, Mike Perkins and Mike Spicer bring a new, twisted meaning to the notion of becoming one with nature. We see the suggestion of Swamp Thing in the throes of emergence or rebirth, his features in a tortured scream as he regenerates from within an ancient tree in the Kaziranga forest. Perkins’ tangled, twisted lines are used to great effect here and are made all the more unsettling by Spicer’s unusual colour choices. We’re very much transported to the setting before we even open up the book.

Reading ‘In my Infancy’ part 3, we open on a scene with Nightmare Nurse offering a warning to Peacemaker which serves as a strong reminder of the true nature of what Levi Kamei has become. Her words are punctuated as we turn to the spectacular title page, depicting a ‘rumble in the jungle’ between Swamp Thing and Chemo. It’s a double page spread straight out of an old monster flick or kaiju movie, and is yet further proof of the quality of this title.

In order to save Kaziranga Forest and himself, Levi/Swamp Thing must now face the remaining members of The Suicide Squad along with powerful memories, not all his own. As he is ambushed by a frenzied Parasite, we see Parasite’s grim origin (featuring further DC cameos). This segues into a sequence of Levi’s memories as the two combatants share an osmosis of recollection.

It’s an interesting and uniquely ‘Swamp Thing-esque’ way to resolve a showdown, and while the two brutish forms still go toe-to-toe, the real battle is fought in the mind. In what proves to be an issue jam packed full of action and revelation, Levi then goes on to face not only Peacemaker but his brother too, who bears a warning and hints of the larger tapestry at work.

In a run that has been unfailingly good in every way, this issue stands as perhaps one of the most ‘non-stop’ reads. Certainly, the Swamp Thing versus Suicide Squad element of the ‘In my Infancy’ story has been full of crowd pleasing moments (particularly in light of Peacemaker’s appearance in the recent DC film). But while Ram V writes to entertain, filling each page with cool stuff, he also gives us food for thought, each and every time. That’s one of the really great things about his work.

In a similar way, the work of his teammates, from the art of Perkins and Spicer to the ever-inventive lettering of Aditya Bidikar can be appreciated on a number of levels. There’s the initial read-through that gives the ‘wow’ factor, and then there’s the times when you look again and see the really clever things going on throughout.

Swamp Thing #8 is a superb comic, being hugely worthy of the series’ reputation. It’s an ongoing testament to the remarkable talent of its creators that we get to read something exciting, cerebral and immediately relevant to our current world. I recommend you take a trip to The Green, maybe even stay a while. You’ll be glad you did.