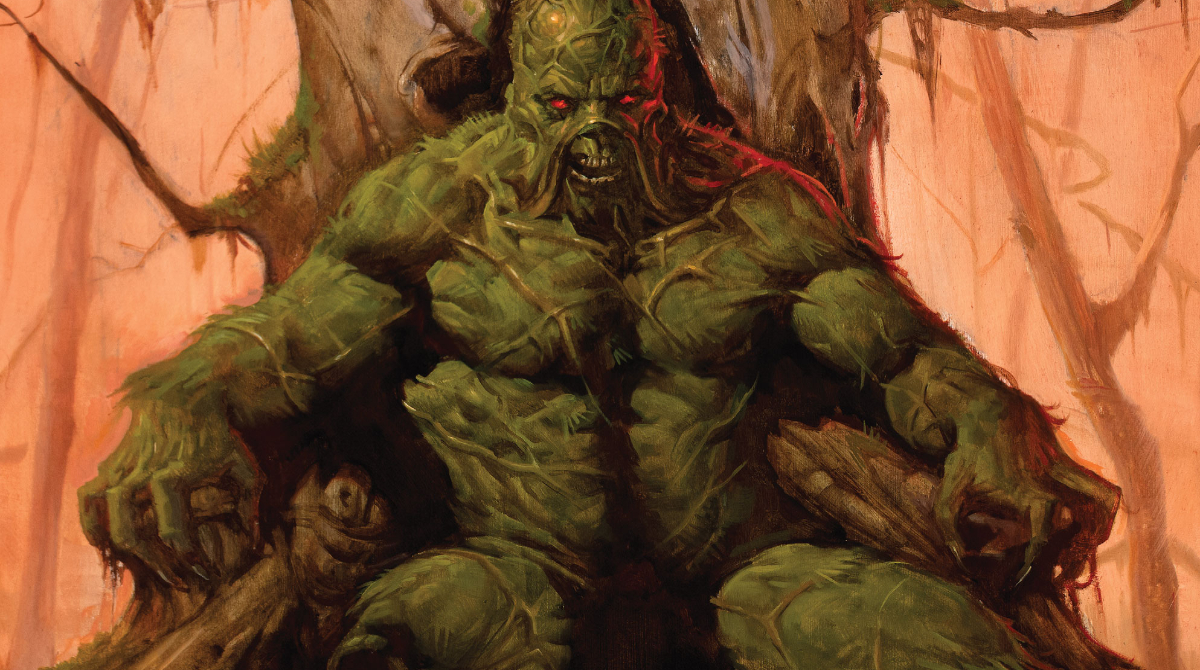 The cover for issue 9 feels like a promotional poster for a title fight, more so with the tagline ‘Brother vs. Brother’. This continues a vibe established by Mike Perkins and Mike Spicer on the title page of last issue, only here Levi/Swamp Thing faces his brother Jacob as the warped, vengeful perversion of the Green he has become. It’s powerful stuff, exuding the inner turmoil of both characters. Perhaps fight promoters ought to be approaching these guys to do some poster work…

Following the events of ‘In My Infancy’, Ram V and company bring us to a new chapter, ‘Conduit’. Part one opens on Jennifer Reece (Levi Kamei’s close friend/love interest) being ‘escorted’ through an imposing facility to meet with the apparent mastermind behind the machinations of the Prescot corporation. Mr. Pilgrim seems to know a lot about her, Levi and the Swamp Thing and, perhaps more dangerously, hints at considerable knowledge of The Green.

We then cut to New York and Levi trying to visit Jennifer, only to discover her missing. What follows is classic Swamp Thing and shows a much more ‘in-tune’, self-assured Levi as he puts his abilities to work tracking Jennifer down.

The story goes from there, with Ram V giving us a matter-of-fact ‘villain’ in Mr. Pilgrim, who goes on to outline his version of the big picture. In his hubris, he is quite unaware of the doom that approaches. It’s not long before chaos unfolds, with Jacob arriving to lay waste to the Prescot site.

As ever, this is a compelling read, initially offering a few moments to breathe following last issue’s action packed, fast paced events. Ram V does a great job of revealing the man behind the curtain while also showing us a more confident Levi alongside a further portrait of his brother, Jacob. The history of Prescot an Mr. Pilgrim’s involvement with Swamp Thing and The Green unfolds over a fascinating and brilliantly executed double page spread; one of many highlights in this issue.

Mike Perkins brings us everything here, from clever use of organic structures as both frames and panel elements through to inventive action and intricately rendered human emotion. His artwork is consistently amazing and is always perfectly complimented by Mike Spicer’s colours, whose palettes guide our subconscious mind as we read. Every colour choice has a purpose, beyond the function of looking good. Spicer makes a lab seem cold, a person seem even angrier, a moment of violence all the more unsettling.

As an interesting side note here on the subject of colours, at a recent panel discussing Swamp Thing, Mike Perkins and Ram V talked about some of the palette used in the title and its predecessors. Apparently, forests and swamps are often rendered in shades of purple so that Swamp Thing can stand out against the backdrop (avoiding a green-on-green mush of confusion). We can see this on not only the cover of issue 9 but in several interior panels as well.

From cover to cover, this is an outstanding experience, with one of the best creative teams bringing us one of the best titles. It holds so much for the reader to engage with and gives us characters and events that we actually care about. And after all that, it’s full of cool things that we can check out again and again and say ‘wow’ to. I know I’m a proverbial stuck record on this, but Swamp Thing really is just that good.