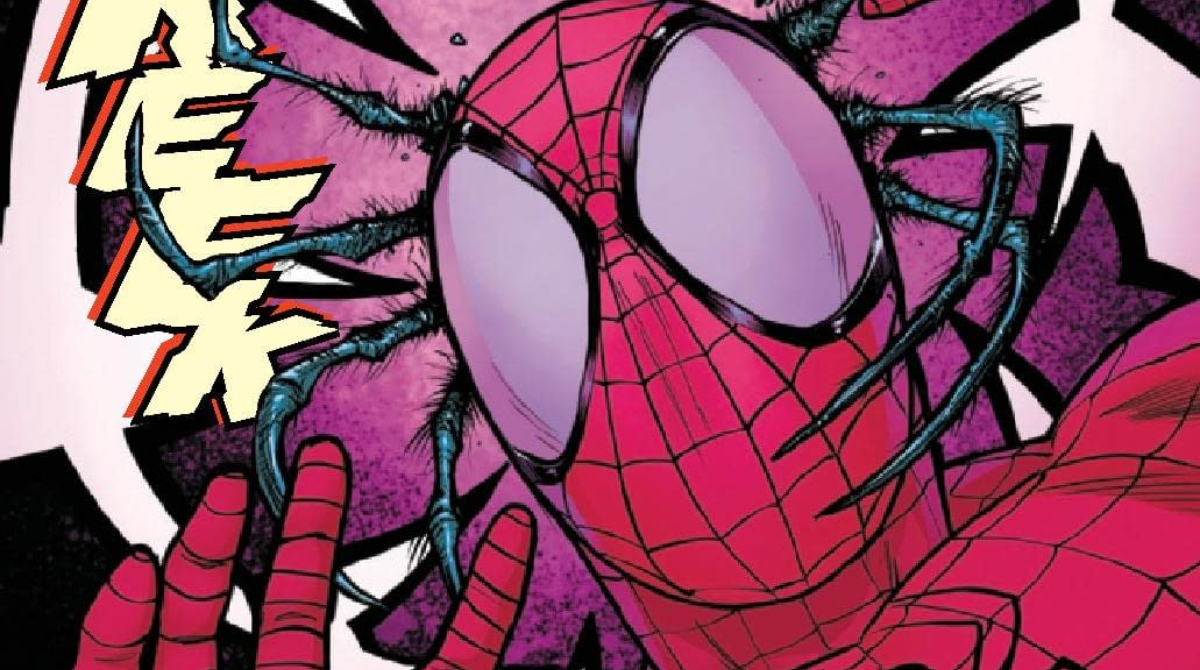 This issue of the Amazing Spider-man is a special one! Beyond board member/artist Patrick Gleason takes on scribing duties as well as art on this book. A story of heroic success and rising above his enemies…is not the story told in these pages, well, it kind of is actually…

Janine Godbe, Ben Reilly’s loveable girlfriend stares at a highly advanced screen sprawling headlines with Spider-man’s name across them as she sits in a pool. This scene, by the way, us about as much as we see from the Reilly side of the Spider-family. She talks to (guess who?) Marcus on the phone and then wanders off. Not a needed scene, but it’s good the book tries to keep intertwined with both Spider-men in the same issue instead of drawing away from the main arc.

Next thing we know, we’re in the hospital where Peter Parker, who has apparently totally forgotten about the crazy monster that tried to EAT him last issue, is being scolded for not being up to physical therapy. Luckily, these last couple of issues Peter’s been getting a lot better to the point where he can stay conscious and even be able to walk. Once the doctor leaves, however, his Spider-sense sets off and goes crazy, the imagery in this scene is pretty darn cool and Switches up the colorist to the renowned Nathan Fairburn who makes the scene look flatter but insanely vibrant and beautiful as Spider-man falls through his own brain. We get some more awesome imagery as a spider literally breaks through Peter’s face and a Spider-man-like creature walks out of his head (yep) into the distance.

Sometime after, the nurse once again confronts Peter about his physical therapy and she’s told he’s up to it as she hands him a package. Inside the package is an old, tattered Spidey-stume from, as the comic states, 2007?! That would mean that Spider-man has been Spider-man for at least 15 years. So that means that if we take into account that Spider-man was 15 when he became the web-slinger, he is now AT LEAST 30 YEARS OLD! THAT’S ANCIENT!!! (apologies to any readers in their 30’s and up, you aren’t THAT old). In my mind, Spider-man should be no older than 25-26, that’s not too young to be married or even have a kid and he’d still be considered young in the grand scheme of things (again, no shame for people in their 30’s, you’re in your bodies physical prime, enjoy it whilst it lasts!). unfortunately, however, his age does fit into marvel’s sliding timescale ratio, being that 4 years in real-time is one year in the marvel universe, so considering Spider-man turns 60 this year, dividing that by 4 we do actually get 15 years.

Sorry for my rantings but I just wish Marvel could do some sort of reset to make the characters younger, they have to do something at some point, or else in another 60 years Spider-man’ll be walking his kids down the aisle, which is not cool (or it could be, perhaps in an alternate universe). Aaaaaanyways, this is the point where marvel deems this the biggest Spider-man moment in years, that is, Peter Parker getting acknowledged in action!

Lounging on a skyscraper wearing a gown and slippers, he spots his first criminals of the night, a couple of star-crossed lovers who’ve just robbed a bank. Just a little side note, in this scene in particular l, the dialogue sounds a little janky and unnatural, I’m not sure how far Gleason’s writing career extends but some of the speech doesn’t sound like how a person would speak. This isn’t necessarily a bad thing, Tarantino characters sound totally weird but it works for the narrative, but this however was just a few errors that could have been ironed out. VERY if it sounds like I’m being a downer but that’s my biggest complaint with this issue and it’s VERY minor which should give you an indication on how good this issue is. Spider-man lands on the hood of the thieves car and as he prepares to shoot his web, his web shooter starts playing toy sounds, with Peter understanding the seller he had bought it from had reworked it to be a toy, and gets hit full force by the car as it thrusts into the wall, then taking a huge beating from the couple who would’ve been slim pickings a few weeks ago in Spidey’s life.

By some divine intervention, Captain America, an avenger who is likely busy with saving the world, just happens to be hanging around a New York car park and saves Spider-man from the terrible clutches of two Bank robbers! One of the robbers ends up shooting a bullet directly at Spidey’s head when it’s diverted by Captain America’s shield! However, in a moment that ca  only be summed up in the word “ooooooooffoowweech!” Spider-man gets totally spangled on the dome with America’s symbol of heroism. Aaaaand that was the end if Spider-man’s short-lived super-heroine return. Another dream sequence occurs where uncle Ben has a wholesome chat with Peter about heroes and that Spider-man looking creature from before emerges when a young Peter calls out the webheads name as the spindly figure lunges at him, he turns into Spider-man and bats the creature away and the issue ends with Peter waking up, crying NEVER!

Did this issue have one of the biggest Spider-man moments ever? Not really, on the other hand though, it was a really solid, action-packed issue with various qualities of coloring and one of the funniest Spider-man scripts in a while, this book did make me chuckle a couple times. Pat Gleason does a fine job as the sole storyteller on this issue of The Amazing Spider-man and that’s worth commending. Well done beyond team!