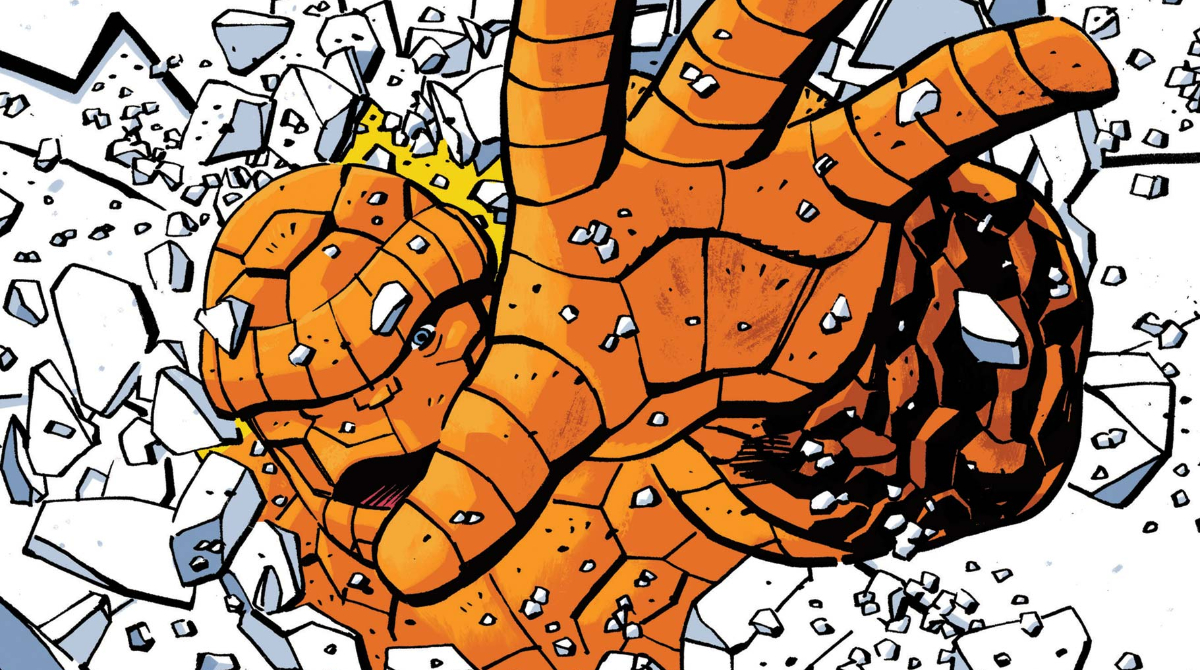 Join Ben Grimm, or The Thing to use his professional name in a new six-part solo series entitled The Next Big Thing. Set away from the Fantastic Four’s present continuity, somewhen in the team’s past, this is something to be enjoyed on its own, without the need for a ‘previously on’ recap button.

And I hope you do enjoy it. Because I thought it was fantastic! There, got my verdict in early…

This is really good comic. Writer Walter Mosley and artist Tom Reilly pack so much into the thirty-two pages that are instantly worth reading it again and again. It’s got a bit of everything, action, humor, super-hero hijinks, and a surprising amount of horror. Presumably, the kitchen sink will be in issue two.

But mostly it’s full of character. Mosley and Reilly combine to capture all sides of Ben’s personality, from his big heart to his big temper. Reilly’s cartoon-style art is incredibly expressive and perfect for capturing the range of emotions on The Thing’s rocky exterior. However, the standout theme is one of loneliness and melancholia. Despite his positivity and can-do attitude, Ben is still a man forever trapped in the body of a rock-skinned monster. Although it’s his jealousy and not his appearance that is the biggest obstacle to love and happiness.

Ben returns home from a few days fishing, ever-lovin’ and ready for some company only to find the Baxter building empty and the rest of the FF and girlfriend Alicia away being busy or having fun. Ben is out of the loop and reunions will have to wait. It’s the first touch of sadness but there’s more to come.

The reunions don’t go well. Ben’s jealousy and temper get the better of him and he ends up getting arrested by the superhero police. The prison sequence is great fun, locked up with the Avenger Hercules (who’s hungover) in an unbreakable cell. It’s proper superhero daftness and it’s a joy to watch them break out.

Bailed out by his teammates and dumped by Alicia, Ben is offered the chance to join an intriguing new dating agency. Reluctant at first but loneliness and bad dreams change his mind. There’s a lovely scene where Ben has to fill out a character questionnaire form and has to be thoughtful and honest with himself. In fact, every page seems to have a lovely moment or surprising detail in it that elevates everything to another level.

Sometimes it’s just a panel, like the look of regret on Reed Richard’s face unable to ease his friend’s pain. Other times it’s the whole page. Ben walking alone through the cavernous fairy-tale Baxter Building surrounded by wonders, a Beast minus his beauty. I could list a dozen other special moments.

Meanwhile, there’s a horrifying new villain called MOT stalking the streets and dreams of New York. A death-like figure is able to reach into a person and pull out their heart, corrupt it, and then put it back in. MOT’S sequences add an unexpected strain of horror to the story. There’s some strong imagery and nasty violence (and the consequences of violence, which is refreshing). However, there’s nothing gratuitous. Like everything else in this comic, its pitched just right.

Finally, Ben starts a new day with a message in his inbox and he’s off to meet someone new. A positive ending on what’s been a bit of an emotional roller-coaster.

Then the wall explodes. Roll on issue two.

See above. Superb storytelling and great art, a really strong exploration of the character, and packed with lovely moments. These guys really know their Thing!