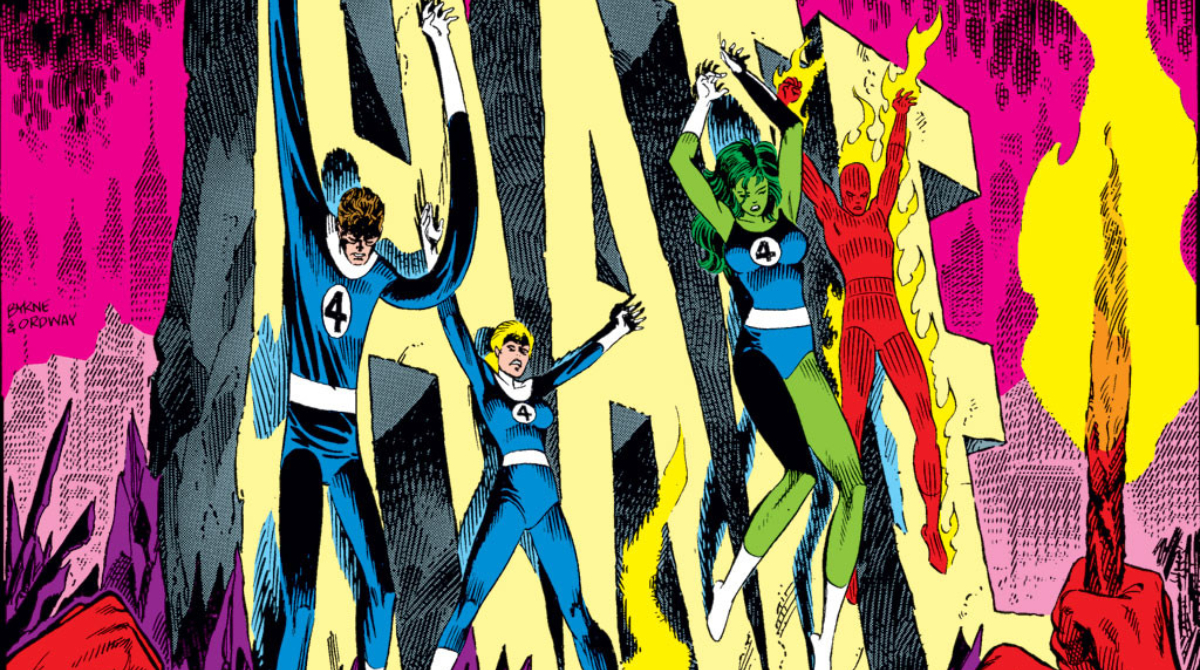 The Fantastic Four is surrounded by an angry mob, with flaming torches and fists raised, crucified against giant stone letters spelling the word HATE while New York City burns in the background. It’s a dark and powerful image by writer and artist John Byrne and inker Jerry Ordway and makes a great cover for Fantastic Four #280. I definitely want to read on.

The story begins with the FF standing outside a giant hole in the ground, all that remains of the Baxter Building, their home, and base of operations, which has been plucked out of the ground and fired off into space and ultimately blown up. This all happened the last issue and necessitates a quick recap for anyone like me who missed it.

Exposition in older comics is always a pleasure to read. It’s clunky and unnatural and usually between characters who already know what happened but I love it all the same. Byrne being an excellent writer actually does it really well in this issue. It’s all done in a quick three panels on the second page as Reed Richards explains all to a disbelieving police officer.

Perhaps I should insert some exposition of my own. This issue comes somewhere in the middle of John Byrne’s revitalizing run at a time when She-Hulk has replaced The Thing as the team’s wise-cracking muscle.

Obviously, a building disappearing and leaving a gap in the skyline is going to draw a crowd and it’s here where the story’s dark mood begins to manifest itself. It starts with one old man, a tenant of the Baxter Building angrily berating the “Fancy-pants super-hero” for letting his snack shop be destroyed which he’s run for twenty-two years and carried a lifetime’s worth of memories.  Reed Richards tries to placate him but it’s clear nothing he can say can help and it’s the first indication of how powerless super-heroes can sometimes be.

Instead, a police officer takes charge, pulling the man away and slamming him against the wall. The old man is revealed to be a Jewish-German immigrant and comparison to Nazi Germany and stormtrooper tactics are soon made explicit. Byrne is not pulling any punches and isn’t interested in his point being misunderstood.

Things escalate quickly when the She-hulk tries to intervene. The police and then the watching crowd turn on the Heroes. She-hulk is arrested and the mob surrounds the others throwing bricks and brandishing clubs. Unwilling to use their powers against ordinary people the FF are forced to split up and retreat only to find that the epidemic of hate and anger has spread to the whole city.

It’s a strong opening act reminiscent of Byrne’s award-winning work with Chris Claremont on the Uncanny X-Men who as mutant outsiders are continually hated and feared by the world. Except the Fantastic Four aren’t outsiders. They are the mainstream, Marvel comics most famous and loved superhero team. If the world can turn against them in a flash, it can turn on anyone and the impact is all more powerful because of it.

The rest of the issue follows a more conventional line as the real Villains make their move but the themes of powerlessness continue. Mr Fantastic struggles against the power of propaganda and She-Hulk finds that no matter hard she hits she can’t defeat a villain whose powers are intangible hatred and fear.

Byrne’s art is clean and graceful as ever. His She-Hulk is a particular highlight and her journey through the hellish burning city is a real stand-out.

A very grounded issue of the Fantastic Four with a serious point to make with an excellent opening act and a brilliant cover. As a casual fan, I’d definitely be interested in reading more from Byrne’s 80’s run.