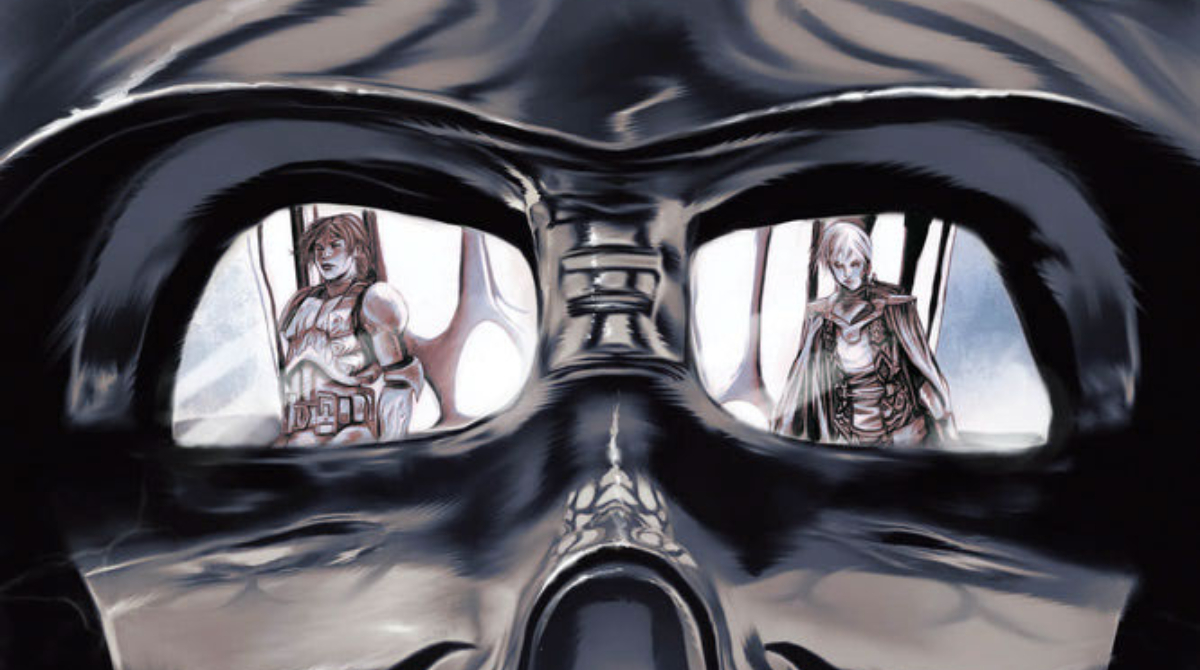 The next Star Wars event begins here, with the opening issues of Crimson Reign, the second arc in what has been dubbed ‘The Qi’ra Trilogy’. But will it be another epic barnstormer to follow up War of the Bounty Hunters, or will it be the start of a descent into event fatigue? We round up some of the latest Star Wars releases from Marvel Comics to find out…

Following the reveal of Ochi of Bestoon’s dramatic double-cross, and the Empire’s utter decimation of the Hutt syndicate, Darth Vader looks set to be the title most closely intertwined with the events of Crimson Reign. From the outset, this issue examines some of the effects of the emergence of Crimson Dawn and Vader’s response to them. It makes for a non-stop, galaxy hopping narrative but, as usual, under Greg Pak’s stewardship, the big man himself makes the biggest impact possible in the few panels in which he appears. He may not be at the front and centre of every skirmish, but his influence is what always drives the narrative – he’s a smart, shadowy, sinister controller of events that Crimson Dawn’s Qi’ra could only ever dream of being…so far.

The highlight here is the introduction of a ragtag group of assassins on personal missions to take revenge on Crimson Dawn, something which Vader seems set to use to his advantage. It’s clear that Pak is going to give us more reasons to love and empathise with each of them before dispatching them in the cruellest fashion possible – it’s good to know that some things never change!

Artist Leonard Kirk does a solid job throughout and his presentation of action and chaos is clear and assured, making the splash pages that highlight the bigger moments all the more impactful. Alex Sinclair takes full advantage of the shift away from the Imperial colour scheme of greys and blacks, as the reds and oranges of battle practically pop off the page.

Special mention must also be given to Aaron Kuder and Richard Isanove’s stunning cover – this is simply begging for a frameable print!

The effects of Crimson Reign look set to be a little separated from the core Star Wars comic, at least for the next couple of issues, as Luke goes off in search of more lessons of the Jedi to aid him in his quest to finally be ready to face Vader.

#19 also sees the introduction of a new artist, Marco Castiello, who steps in to cover a few issues for the incredibly talented Ramon Rosanas, who lends this series a real classic comics feel. Castiello’s approach is a beautifully sketchy one, which gives an appropriately otherworldly feel to each of the alien vistas that Luke visits as he tries to find a Jedi outpost that hasn’t been ransacked or completely destroyed by the Empire. Castiello’s dense inking makes for some suitably shadowy close-ups of a Luke Skywalker in turmoil, contrasted eye-catchingly with Rachelle Rosenberg’s dynamic colours.

Some of Charles Soule’s best moments in his consistently excellent run on Star Wars so far have been in his character work around Luke, filling in the gap between the boy at the end of Episode V and the man at the beginning of VI. This issue is no exception, as we see Luke fluctuating from doubt to confidence and back again in a realistically human way. He also receives guidance from a character that some fans may recognise from Soule’s short run on Darth Vader back in 2017 – it’s little nuggets like this that make the interwoven world of Star Wars comics so rewarding and beguiling. (More on that when we look at #20!)

The only slight problem that rears its head at the beginning of this issue is the sudden realisation that so many threads were left hanging during the six months or so that War of the Bounty Hunters was going on. While the reminder is handled in a way that fits the narrative and avoids clunky exposition, there is a slight risk of the reader being taken out of the moment as they scrabble around to remember what happened not only a good six or so months ago in this particular book, but also before the events of a line-encompassing, 34 part event series. That said, the threads that look due to be picked up soon should be exciting ones and give more signals that this book won’t be quite as interdependent on happenings elsewhere as during the previous event.

And so we come to the headliner – the first of five issues of Crimson Reign, the backbone of the event of the same name. Soule is at the helm once again and wastes no time in setting up a number of intriguing prospects whilst driving the narrative forward simultaneously. While the core of the story is formed around a war between the various crime syndicates across the galaxy, there is a lot more at play here, and Soule drops in mystery after mystery and tease after tease, making for a tantalizing read and an agonising wait until the next issue!

The older, wiser Qi’ra continues to be an interesting character in Soule’s hands – the potential for true cunning and guile we saw in her at the end of Solo: A Star Wars Story is truly realised here as she plays seemingly half the galaxy off against each other to her own ends. Those ends don’t yet seem to be entirely bad ones from what little Soule reveals here, but it’s certain that her methods are questionable – the final panel hints that dire consequences approach…

Steven Cummings has an unenviable task with this issue – so many characters are featured, so much ground is covered, so many locations are used, that it must be one hell of a task to realise everything that pops out of Soule’s head for this one. It’s a challenge that Cummings grasps with both hands – he takes a cinematic approach, his images acting as a perfect partner to the narration of the Archivist. There’s also an early 90s feel here too – shades of Ron Lim abound, panels featuring alien creatures or space battles could well have been lifted from that legendary artist’s almost as legendary run on Silver Surfer.

A promising start to an event that looks set to be altogether different to the one that came before it.

Luke’s search for Jedi knowledge continues in another issue that takes a step back from the goings-on in Crimson Reign. Soule once again shows just how much he gets Luke and the struggle he is facing to become the Jedi he wants to be whilst grappling with the expectations placed upon him.

All of this is dealt with in an incredibly exciting manner for any fans of other parts of the Star Wars comics and books range. There have been hints and references to the incredibly successful The High Republic publishing initiative throughout Soule’s run (he also forms part of the writing team for that project), but here we finally get a moment to make High Republic fans cheer. No spoilers here, but Soule has picked just the right character to compare and contrast with Luke, as they speak to each other through the power of…magic mushrooms…?

With that comes some trippy visuals, which Castiello makes even more alien than the landscapes in the previous issue. Again, his dense inking really serves the issue well and Rosenberg’s colours are intense and solid, lending some of the more nightmarish panels a satisfyingly bloody hue. This isn’t an action-packed issue, and both artists make use of the space to great effect, providing striking images throughout and evidently revelling in their little trip into the days of the High Republic.

So far, it seems that the approach to event storytelling is a different one with Crimson Reign – less all-consuming than War of the Bounty Hunters, right down to the lack of an event banner on the covers for Star Wars and Darth Vader. It’s encouraging that the main Star Wars book especially has been given a little space to breathe and to deal with the fallout of the last event before diving headlong into the next. Pak and Soule continue to be two writers at the absolute top of their game, showing that Star Wars comics can work whether the storytelling is on a grand, bombastic scale or whether it’s dealing with the inner turmoil and doubts and fears that will eventually be the making of the galaxy’s greatest hero.