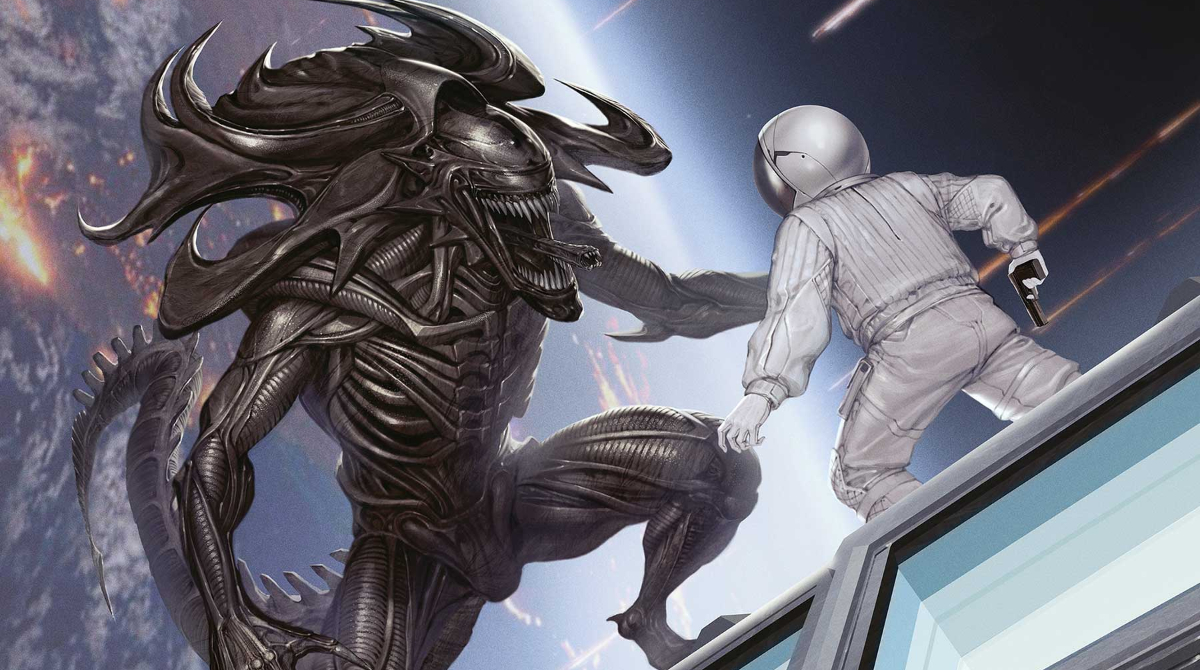 There is actually a great variant cover by Anacleto that I think is better showing the intrinsic link between Gabe and the mysterious ” woman in the dark “, an Alien presence that has been one of the great and slow-burning reveals in the series.

This main cover of a stand-off between Alien and human was a little frozen and lacking in both action and terror in comparison to some of the other covers in this series. It is however a fair reflection of the climactic action in this issue. A space-suited human (Gabe) faces off against an Alien he helped create. Our hero faces almost certain death, but the fate of all he holds dear is on the line.

Issue six is the end to Marvel’s Alien first arc. We get the usual round-up of the story so far in the first couple pages and are then straight back into the action.

The writing remains pretty solid, and there are enough tie-ins to Alien lore new and old for this Alien fan to feel invested. There have been consistent nods to the Alien films in previous issues and this issue builds further with references to Prometheus. I liked how Iris the corporate terrorist synthetic has a humanity-threatening agenda similar to David in the film by trying to unleash Aliens on planet earth. She describes her role to create a ” post organic utopia”. The idea that the Xenomorphs are the universe’s method of greeting the hubris of organic species whose technological advancement sends them out into the great unknowns of space gives the unfolding franchise plenty of scope for one-shots and arcs. Organics are to be met by the “cleansing fire” and this is something I really thought reminiscent of Hadleys Hope in the Aliens film.

Gabe’s fate in his attempt to redeem himself as a father, going to any lengths and sacrifice for his son concludes, much like depicted in the cover, in a fatal stand-off. It was a heroic way to face death in the face of insurmountable odds. I think there is enough plot development for this to possibly take future twists with the Xenomorphs and the mysterious connection they share with Gabe and the hypersleep and xenomorph impregnated Danny.

Guru-eFX knocks the color choices out of the park. There is a sense of terror and horror brought to the pretty average Salvador Larroca art. Larocca’s art just isn’t consistent enough for me and any Alien depictions just seem a bit too jolly, posed, or lacking in punch for me. The lettering from VC’s Clayton Cowles is flowing in nature and makes for compelling page-turning which with the intriguing story again propping up the art for me.

This first chapter offers promising new avenues for the future. Iris stated in her death a bigger picture or implied purpose” I don’t expect either of you to know what that means”  Well this reader damn sure doesn’t either!  Marvel hasn’t wowed with this first arc but there’s some good groundwork in a franchise that has a weight of several decades’ expectation on it. It is maybe not to everyone’s taste but it’s hard to not keep reading on.

A great blend of new and old gives us an exciting take on an expanding Alien universe. Roll on the next arc!!!