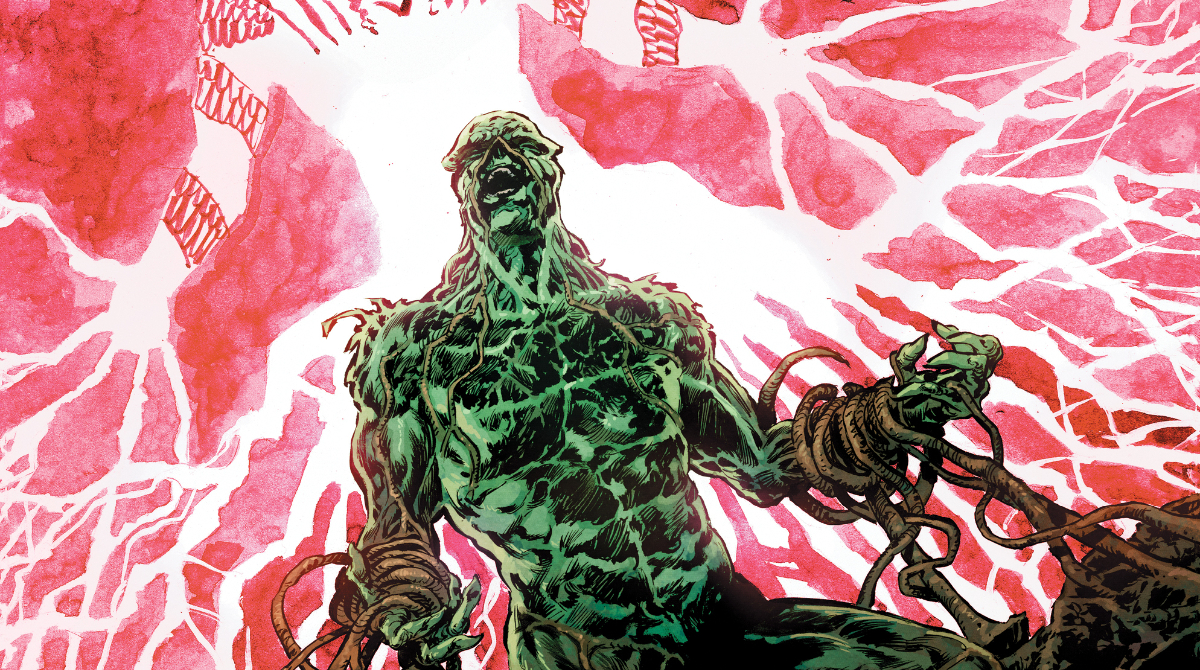 Well, it happened! DC has extended the run for Swamp Thing from the initial 10 issues to 16. I heard this great news a little while back and, soon after, was lucky enough to attend the Thought Bubble festival in Harrogate, U.K. where both Ram V and Mike Perkins were special guests and panelists discussing Swamp Thing. Both guys were a real pleasure and honour to meet and were all too happy to engage with their fans. They hinted (in very cryptic terms) about things to come, and I’m more sure than ever that we’re in for quite the ride.

Returning to the issue at hand, we have a cover that compels all readers of issue 9 to find out what happens next as Levi faces Jacob in the bowels of the Prescot facility. Mr. Pilgirm has escaped and has initiated protocols to engage a cryo-purge of his now ruined research facility. It’s a dramatic and striking piece of art, with Swamp Thing looking truly anguished, with Jacob’s ‘inverse silhouette’ bringing to mind the after-image of people left on the walls of Pompeii.

It’s a stark contrast then when we open the comic to find scenes of Levi and Jacob playing together as boys; carefree and happy against a warm Indian sunset. Juxtaposed with these images from Levi’s past are musings on Nature’s memory, specifically trees; referred to here as ‘silent sentinels’. This internal monologue from Swamp Thing is beautifully written by Ram V, carrying us over several scene cuts, and is thought-provoking while never becoming preachy.

As Jennifer tries desperately and futilely to dissuade Mr. Pilgrim from activating the fail-safe, Levi wrestles with his regrets while physically wrestling his enraged brother. It seems there is little hope for them as Pilgrim floods their surrounding with liquid nitrogen and the bio-agent used to subdue Kaziranga Forest.

The panels flow brilliantly throughout all of this, showcasing Mike Perkins’ immense talent for art and sequential storytelling. When I asked him about his approach on Swamp Thing, he said he basically lets the pen guide him and the lines follow; it’s an organic process. This certainly accounts for some of the incredible artwork he has brought us over the past ten issues but more so speaks to his incredible modesty. He was also quick to give credit to Mike Spicer, and rightly so. Quite how he manages to bring so much added depth and emotion to each scene with his colours is beyond explanation. Add to this, the ever immersive, inventive, and clear lettering from Aditya Bidikar, and you have a recipe for visual perfection.

This issue goes on to resolve and simultaneously expand on story threads established early in the series and it is an absolutely outstanding read. There are appearances from the established Swamp Thing canon or mythos which will thrill long-time readers while piquing the curiosity of those joining at the start of this run. There are many classic Swamp Thing moments and some that feel very much a part of this new and fresh take.

That Ram V and his creative partners have brought something so uniquely ‘theirs’ while also remaining very respectful of the source material (often referring to it through various panels) is hugely impressive. Certainly, during the Thought Bubble panel I attended and in a brief conversation with both Ram V and Mike Perkins, it’s clear they are huge fans of Swamp Thing in all his incarnations. They seem to genuinely enjoy working and indeed, conspiring together, enjoying a shorthand that leads to comic book excellence.

Some heavy hints were dropped that when the ‘season two’ run of this title commences in March, there will be some NDA-protected cameos (make of that what you will!) and much more of the things we have come to love from this title.

Swamp Thing has been awarded a second series with very good reason. Each issue of its initial run has ticked all the boxes; with writing, lettering, art, and colours all being exemplary and combining to make something truly special. Whether it be in the current format or in the hoped-for trade collection, I cannot recommend the work of Ram V, Mike Perkins, Mike Spicer and Aditya Bidikar highly enough. Reading Swamp Thing has been a truly memorable experience so far; thanks, guys! Here’s to season two!