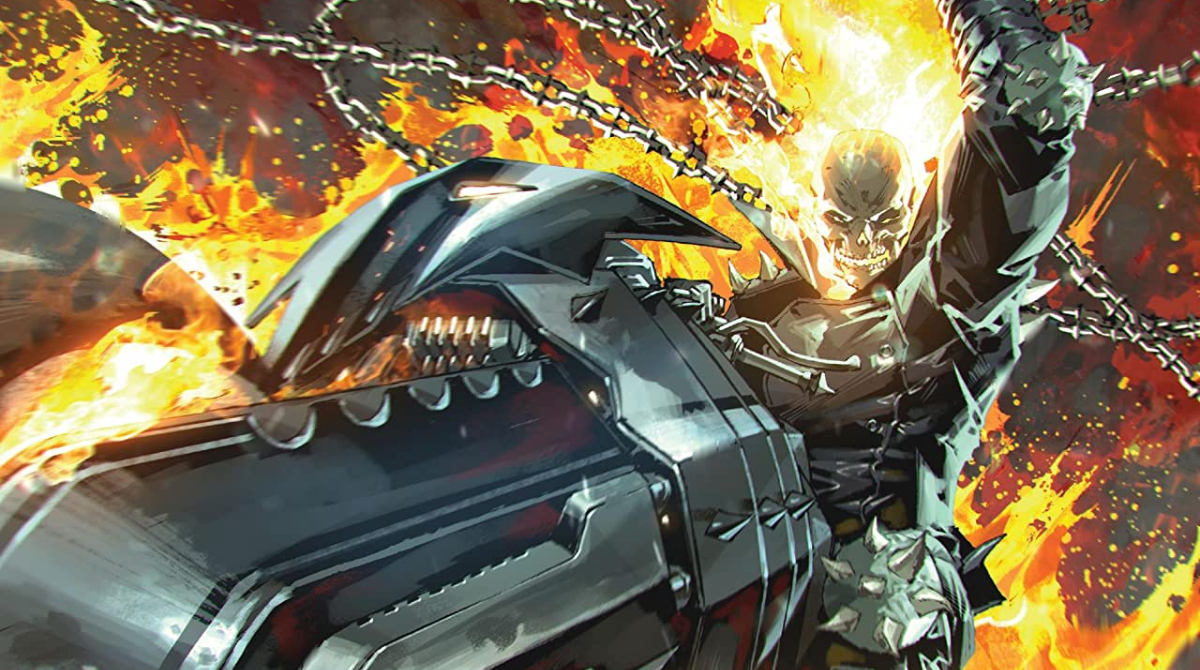 In this bumper sized first issue, Johnny Blaze is undergoing therapy after a motorcycle crash has left him without a clear memory of who he truly is. The idyllic life he leads in Hayden’s Falls as a husband and loving father of two children is shattered when he experiences horrific visions of demons. Are his family who they claim to be? Is the next-door neighbour’s dog a vaguely irritating yapper, or a demon in disguise? Is the white-picket-fence-apple-pie town he calls home a hotbed of supernatural forces? The big question that covers all of these, “Are there such things as monsters?” is repeated as a mantra as he drinks to forget that he might well be a monster himself. When Zeb, a scout for a group of night magicians, turns up in Hayden’s Falls, Johnny is shown what lies within himself and beneath the façade.

A well-executed story, it’s perfect material for a relaunch issue. Rather than dwelling for too long on the memory loss aspect, writer Benjamin Percy wastes no time in getting to the action. The first half of the comic focuses on Johnny’s therapy sessions, home life and visions, before the Spirit of Vengeance comes to the fore in a superb full-page splash.

Pencilled and inked by Cory Smith (with additional pencilling by Joe Bennett), the colour work by Bryan Valenza keeps Hayden’s Falls just the right side of dark, so even though a baseball pitch and supermarket look bright enough on the surface, there’s still a hint of the underbelly lurking beneath (think David Lynch’s picture-perfect town in Blue Velvet and you’ve got the right idea). Zeb’s walk down the main street while he ruminates on the falseness of it all is revisited when all hell breaks loose, with the people he passes by — including a mother pushing a buggy, a postman, a man mowing his lawn – reappearing later in a much different guise. Meanwhile, the anti-hero status that makes Johnny such an interesting character is realised through his bouts of drinking and hallucination-induced outbursts towards his wife and kids.

A very promising first issue that also introduces Talia Warroad, a former agent of S.H.I.E.L.D. turned FBI, whose claim that “I hunt monsters” is already proving to be as intriguing as Zeb’s interest in Johnny. If this is the last we’ll see of Hayden’s Falls, I’ll be sorry (the concept is rich in narrative possibilities), but that won’t stop readers glad to see Johnny break out of his false reality and get to some serious demon slaying. Nice to see Percy and Smith returning the Ghost Rider mythology back to its roots by focusing on the original Spirit of Vengeance. I eagerly await the next issue.