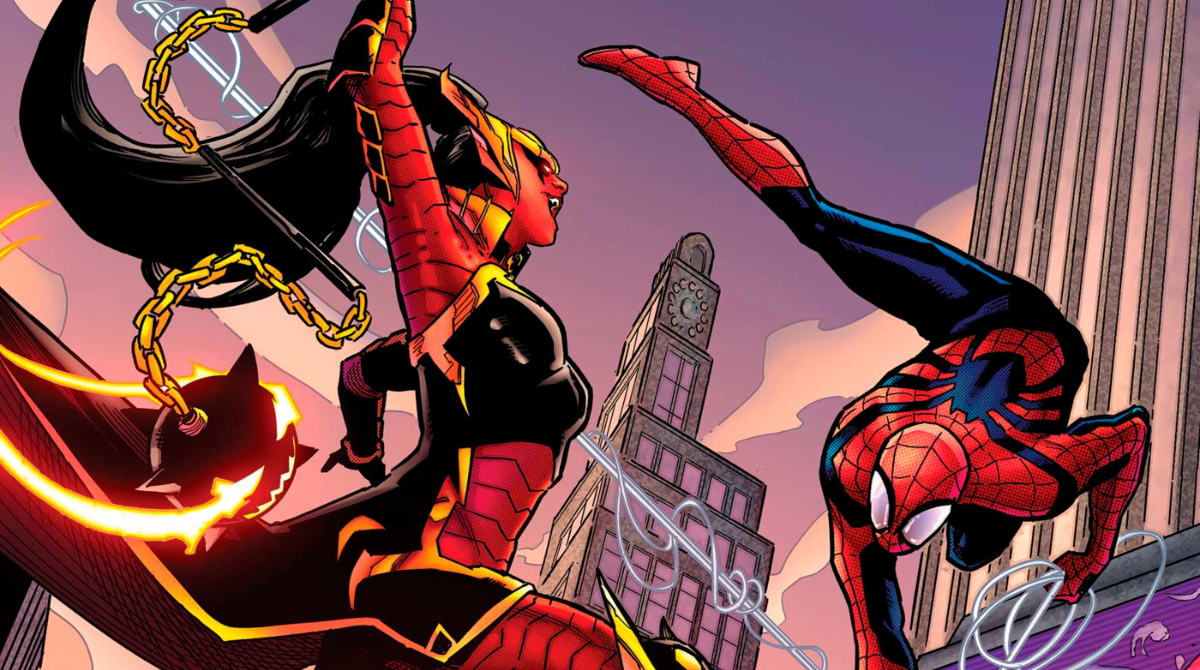 As a quick refresher, in the past couple of issues, Ben Reilly has been partially mind-wiped by those slimy rapscallions over at Beyond, the same dudes/dudettes that have unleashed the Queen Goblin on New York. On top of that, Old Peter Parker has managed to get back on his feet and is on his merry way to put an end to Queen Goblin’s reign of terror!

We begin with Beyond’s top dog, Maxine Danger tracing Ben Reilly as he swings across a bridge with Janine, who notices there’s definitely something off about Ben, which is where he confesses that he feels like he’s missing something in his mind (which, by the way, he totally is,  being brain wiped and all). He tells Janine that he just needs to focus and everything will be hunky-dory, but Janine knows that’s not good enough, it’s at that point that she spills the Intel she’s discovered about Beyond. Or rather, how they’ve set up the whole thing, sending out super-villains for Ben to stop so that they can get good publicity for themselves and their little Spider-man project. They decide that they’re going to take it to the top and go confront the big bosses at Beyond, but first, we’ve got some sweet, sweet action to attend to.

Pete is up in the skyscrapers, battling the new Queen goblin foe, which is where we get a ton of quality Spidey crack-ups, from getting confused with the X-men’s Goblin Queen to mentally crying for help as he barely manages to dodge the goblin’s blows. It’s moments like this where I feel Patrick Gleason really understands and gets the Spider-man character, I don’t feel like it’s one writer’s take on Spider-man, I just think of it as Spider-man, which is the best kind of writing. Of course, it’s great to actually know who’s writing a book by the tone it sets and dialogue and all the rest of the mumbo jumbo. But when it feels so much like the definitive, quintessential character, that’s when you know you’re doing a good job of writing a mainstream comic book. Obviously, it’s awesome to get some subversive material from creators not typically known for the superhero genre like, for example, Pete Bagge’s megalomaniacal Spider-man as well as a lot of other early 2000’s marvel books, which was a very interesting period for the company, but for Marvel’s flagship title, Pat Gleason does a fantastic job of realizing what readers want out of the main Spidey title. And speaking of what readers want, Mark Bagely is delivering some of his best work in the last 20 years in this issue as Spidey and the Goblin take their battle through offices, Spider-man billboards (with the Sam raising font, nice touch), and even subways. Every panel has energy inside it, there’s so much going on, but in a really good way, these pages are bursting at the seems with excitement and it really displays Bagely’s accumulation of skill on his 30-plus year tenure drawing the character. I, at least, got the sense that he must have really enjoyed penciling these issues and it shows great stuff.

Getting back to the story, the Queen goblin manages to use her unique “Goblins gaze” ability which she used successfully on the black cat’s last issue, which would have resulted in her death if not for the web-slinger arriving just in time. So Peter falls into the sea and goes through the whole “you’re not good enough” thing, but Spidey is able to defeat the hold it has on him, in his words “Doesn’t she realize self-doubt is kind of our thing?”. Pete manages to jump up out of the water and deliver the finishing blow to the latest addition to the Goblin Hall of shame.

Spider-man is able to get back onto the docks, where he meets up with MJ and the Black cat at that moment in all great superhero stories, where the previously split apart gang get back together again for the big finale, Peter is sent on his way to find Ben by his companions, but as we check up on Ben, he is kind of going a little bit insane, he’s not going evil insane, but Beyond have really scrambled his eggs to the point he doesn’t even remember Peter’s name when they meet up, but Ben pushes through it, and this installment ends with a page as awesome as when I found 20 pounds in a grid that one time, which means its totally awesome. Both Spider-men, suited up and ready to take Beyond down, Once and for all!

This issue was one of the best parts of Beyond to date, delivering all of those epic moments you know you love as we dive headfirst into what is bound to be an incredible final act of Spider-man: Beyond. Gleason’s writing chops are nothing to mess with and pair beautifully with legendary artist Mark Bagely in a satisfying issue that I couldn’t put down, as far as verdicts go, you’re not going to get a better one than this. Although if I had to make one small gripe, I would say that the Beyond company’s whole twist and game plan is a little predictable, but that is an issue that pails in comparison to all of the great aspects of this Spidey-saga. Join me soon for the next chapter!