THE HALL OF WOW – March Inductees 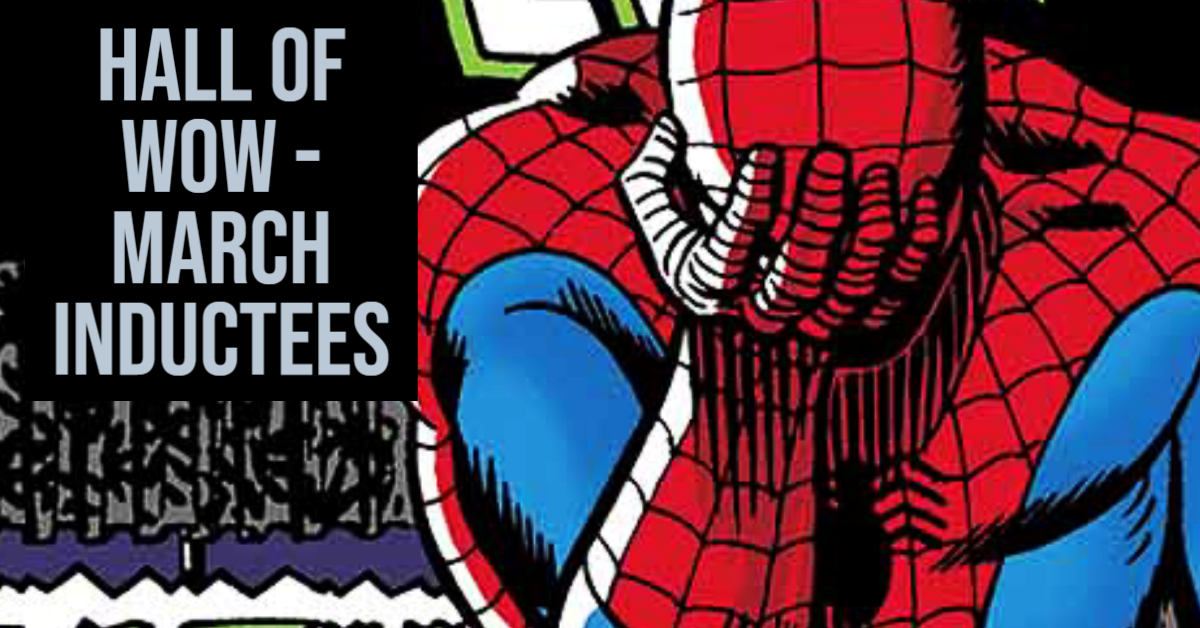 Each month our team of writers each submits a classic or modern cover that they deem worthy of entering into the esteemed HALL OF WOW. At the end of each month, we ask our loyal followers over on our Wow Comix World Facebook page to vote on their favorite as part of our big giveaway!

See the inductees for March 2022 below!

A fine reflective picture of a weary Web-Slinger. Truly iconic

The ‘Sky-Rider of the Spaceways’ faces Thor on Buscema’s classic cover.  This depiction of a showdown on Asgard’s rainbow bridge stands as a great example of dynamic action, pose and character design.  Each instantly recognisable and very much a signature of one of the old masters.  Check out ‘How to Draw Comics the Marvel Way’ if you want to see how he worked his magic.

There are no women like Adam Hughes women, and there are no covers like homage covers. Slap ’em together, and you get this stunning image. The already fantastic cover to Sensation Comics #41 is impeccably reworked by master artist Adam Hughes in a cover that no comic book fan could resist putting on display, and a fitting reward for readers of Wonder woman issue 600.

Could have picked any cover from this series. Shimizu drew them all and every one of them was brilliant!

A cover that perfectly captures the over-the-top drama and the stunning artwork of the Bronze Age revival of horror comics, following a slight loosening of what the Comics Code would allow. Each issue of this series is a perfectly balanced blend of tense, dark atmosphere and melodramatic histrionics and this cover represents that perfectly, the helpless blonde in a classic Lugosi style Dracula’s arms with an eerie backdrop of forest, castle and moonlight. And that logo is just absolutely timeless!

I’ve never been a fan of Kelly Jones’ artwork if I’m being perfectly honest. Which is why I have to give him credit for this brutal and haunting image from his Knightfall cover gallery, in which, the ghost of Jason Todd cries out for vengeance from beyond the grave. But is it a ghost or merely an expression of Batman’s guilt-ridden conscience? Pain, sorrow, guilt, justice, vengeance, anarchy, chaos: all of these things are happening here!

This watercolor from Mike Meyhew is simply stunning. From a technical standpoint, it’s flawless. The color pallet, the postures, framing, and just how beautiful are those stars!

Thematically, it evokes an emotional depth in which the run itself just missed out on delivering, but given the title, any BSG fan would feel a lump in their throat seeing a scene such as this on the cover.

It’s action, suspense, and a key question: why would a kid want to stop Supes from saving his father?

That’s it for this week! Some fine pick’s there from our review team!