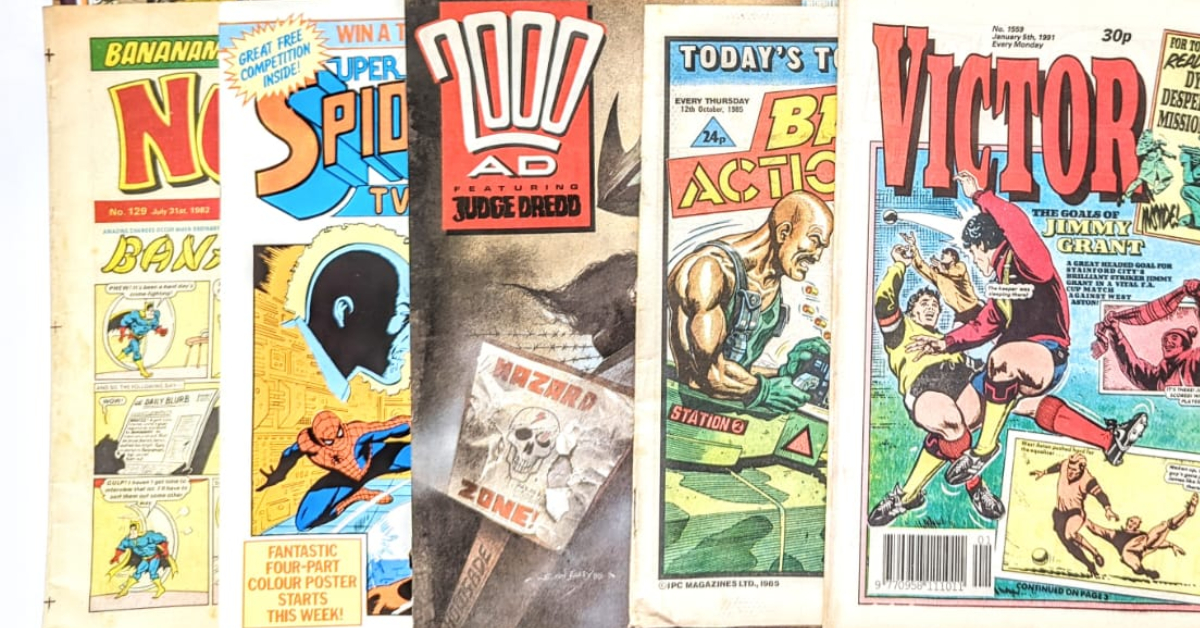 One of our biggest sellers on the website is our Brit-Bags! And if we may say so ourselves, for good reason!

Containing fifteen comics and two mystery gifts, we put these together to enable readers and collectors a fun way to discover the splendor of British comics from decades gone by. We carefully select the items in these bags, so that the titles are as spread out as possible, ensuring you they contain a great range of material.

Comics can range from the 1950s right up to the early 2000s, and contain such titles as 2000AD, Eagle, Warlord, Battle, Commando, Viz, Beano, Dandy, Wizard, and many more classics! The selection is random and, despite the items being vintage and obviously used, we do our best to pack in only copies that we deem to be in good enough condition to send out for both readers and collectors.

The mystery gifts are…just that! All we will tell you is they are related to vintage British comic/pop culture and that we hope you will like them!

And what is more, it’s FREE to post for all those living in the UK! Sounds too good to be true right?! Wrong! Check out some of our recent reviews for our Brit-Bags…

“Stumbled across Wow Comix and I’m so glad.
They do lots of different comic bundles catering for all tastes, and as a retro comic reader I decided on the Brit Bundle. The bundle included free postage and it arrived 2 days after purchasing. The package itself was covered in various comic related stickers which was a nice touch.
I was already excited to see what was inside. The contents covered a great variety of British comics from the 1940s up to the mid 2000s and even included a paperback. As an additional gift I received a copy of an extra 2000ad (which is a favourite of mine) and this had a post it note attached making the whole bundle even more personal.
I’m looking forward to buying more in the future and have been recommendeding them to my friends.
Maximum stars for service, price and products. Keep up the good work.“

Bought a couple of the £10 UK comic lucky bags and was thoroughly delighted with them. There were loads of items including a Beano 1977 annual. A couple of Eagles from 1954 along with some 2000ad’s, Eagle V2’s and some warlords and Battle comics as well as some Dandy and Beano’s. There was even a Doctor Who Cd and trading cards. Bargain.

A superb company. I ordered the Brit-Bag hoping for some nice surprises and I got them in spades. They even threw in an extra item! Definitely impressed by the service and quality of the items.