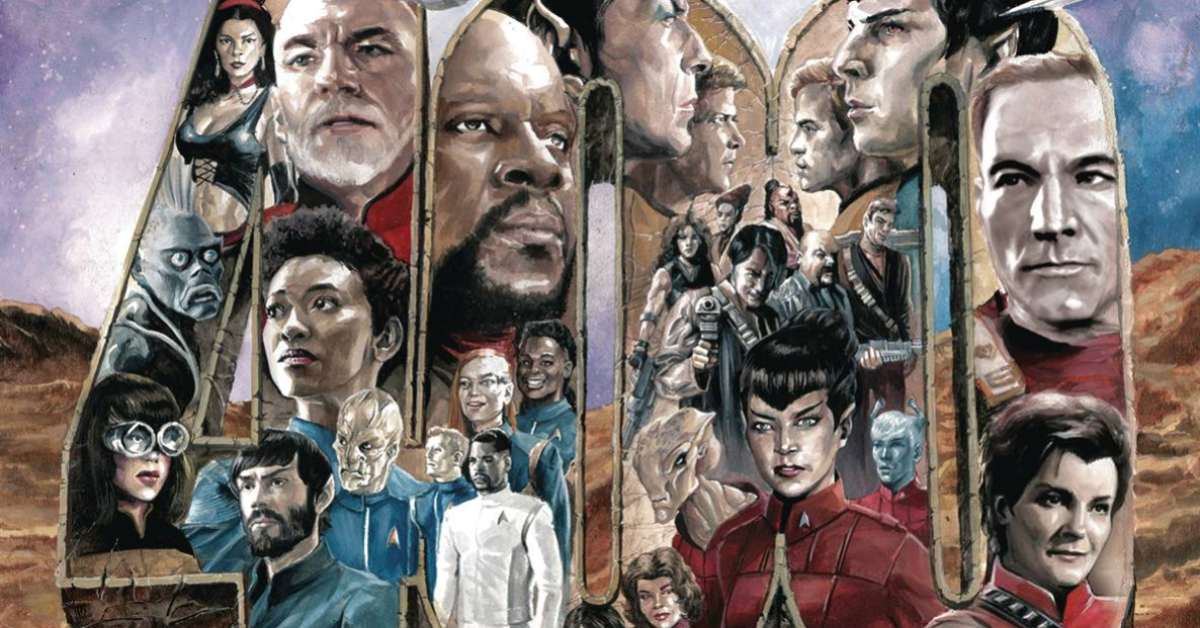 To mark a special occasion, the artists and writers from IDW were asked to club together to make this into an anthology of 5 stories, depicting the lives and (mis)adventures of a few of the crew members from the Enterprise, Enterprise-D and beyond.

I will start with a statement I need to express before we go any further, seeing as this is my first dive in reviewing Star Trek here on Wow Comix World (Watch this space). I’m going to state that It’s okay to appreciate both Star Trek and Star Wars. There, its out of the way…

Looking at Cover A, I was impressed by the photo-realism of a few of the Original Series crew, plus Picard and Data. Having that level of detail and quality in an image of real people whom we know so well is a tough task to fulfill, but it’s good enough to stand up to close scrutiny.

The stories themselves are brief depictions of the past and future of the lives of supporting characters. The first, Captain’s Log, outlines what it is to be the captain of a starship. What is required, what it means to be part of a crew like the Enterprise (“No A, B, C, or D!”, to quote Scotty) and how it feels to leave it behind. The twist? We have no idea until the last page who is recording the log as a newly promoted Captain.

Stories continue with a history lesson showing a young Miles O’Brien as a soldier out of his depth in the middle of the war with Cardassia, and a brief but subtle look at the burdens of being the guy who gets bossed around, and the biggest surprise of all…

‘A Matter of Choice’ is a glance at how a certain character should have finished their story arc. It’s a love-letter to a fine character who surpassed all Star Fleet’s expectations and grew to be something more than we could have believed, but maybe there was one final tale to tell. The twist? It was written by the actor who played that character. Some may love him, some may hate him, but this controversial crew member deserved a good send-off.

There is some standalone artwork that is worth appreciating with a critical eye, a mixture of different story styles, and an editorial by Rich Handley. I will admit that the cutesy-poo style of ‘The Starfleeter‘ wasn’t to my personal taste, but if it gets the young reading about this dynasty, it’s a benefit to (forgive me) the next generation. The fact that it shines a light on an unsung hero from the Discovery series does give it a certain appeal.