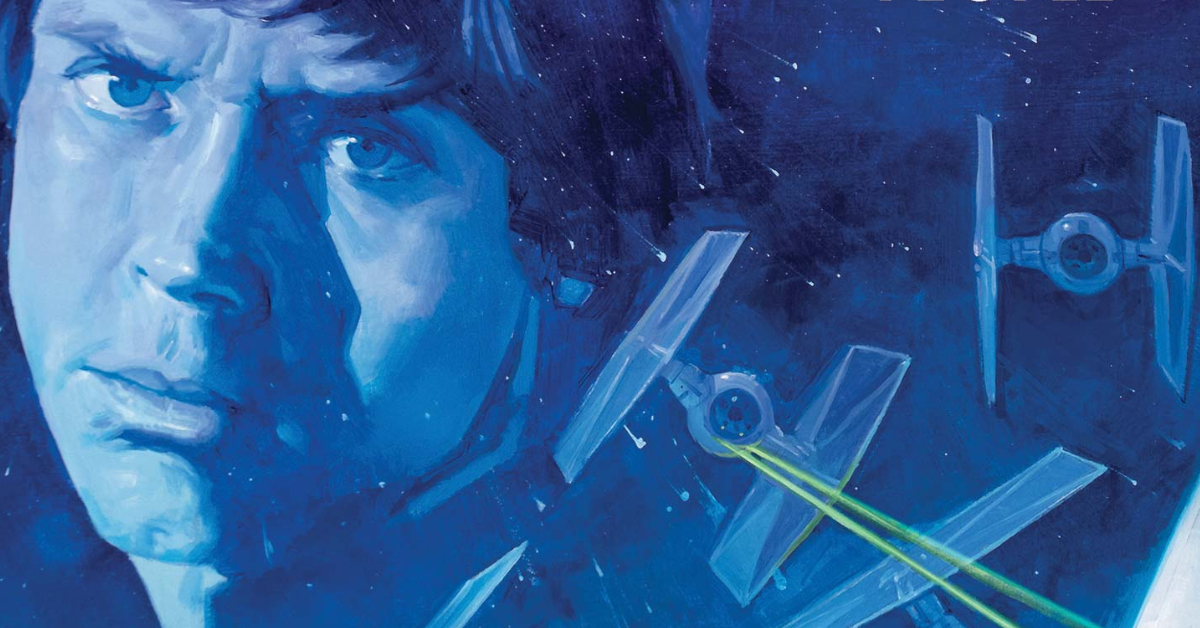 I feel it’s only fair to warn you that I love Star Wars. Stuff has to go seriously wrong for me to not find at least something to enjoy in a piece of Star Wars media. That said, I’m happy to report that this comic (my first to ‘jump back in’ with) is really good, even without the Star Wars positive bias.

Having not read any recent Star Wars comics, I approached this with an open mind and without any background research on ‘the story so far’.  Issue 27 “The Good People” greets us with a cover full of Star Wars goodness: an Imperial Shuttle, seemingly pursued by not only X-wings but a cluster of Tie Fighters as well, all under the gaze of a somber Luke Skywalker.  It’s the sort of thing I used to draw a lot as a kid; tongue out, red and green crayon for the laser bolts… only, this piece of art is great.  And not drawn by a seven year old.  It has that Star Wars tradition of not necessarily being a literal representation of the story, instead conveying thematic vibes. And the vibes are good.

Inside, we’re greeted by a classic opening crawl (yellow words of exposition fading into infinity against a star field, for the rare person who doesn’t know Star Wars) which gives those of us just joining an idea of the story so far.  By this point, I’m already happy and engaged. We’re sometime before the completion of the second Death Star, following Imperial defectors acting as double agents for the underworld syndicate Crimson Dawn as they flee the half-finished weapon of doom, code-named ‘Second Sun’.

Intergalactic cloak and dagger?  Sign me up.  The agents are a married couple and are fleeing with their young children in tow.  The have killed the shuttle’s previous occupant (one hopes not in front of their kids) and are now hoping to escape undetected.  The galaxy has other plans and they are soon discovered and pursued by some mean looking Tie Fighters.

The plan is for them to obtain safe hyperspace jump co-ordinates from the Rebel Alliance in exchange for their deadly secret.  However, we soon find out that things don’t always run smoothly when running from the Empire…

The story is well paced, action packed and full of cool Star Wars moments. It has Lando Calrissian, so plus points are awarded for that.  It has hints of the machinations of Qi’ra, head of Crimson Dawn (she was in the ‘Solo’ film, if you’re not familiar).  It has… lots of cool stuff.  It’s planet-hopping adventure, with awesome ships, aliens and fan pleasing cameos.

Writing and art combine to great effect here, immediately drawing us into the plight of our central characters and their young family as they try their desperate gambit.  The dialogue is convincing, Star Wars-y and fun to read, while the art is dynamic and vibrant.  Tie fighters dart across the panels, blaster bolts sizzle across the page and each beat is punctuated by some really expressive character art.  I found myself to be quite invested in the fate of the lead characters a few pages in, which is testament to the skill of the creators.  They’ve done a great job of taking readers to that galaxy far, far away and providing a thrilling ride along the way.

If, like me, you’ve been away from Star Wars comics for a long time or indeed have never read one, please don’t be put off by the issue number.  We might be a ways into the story, but this is a great jumping-in point.  It’s a genuinely fun read, with lots of ‘that’s cool!’ moments.  This comes highly recommended for Star Wars and comics fans alike.  I’ll give this one an ‘Hello, what have we here…?’ rating.