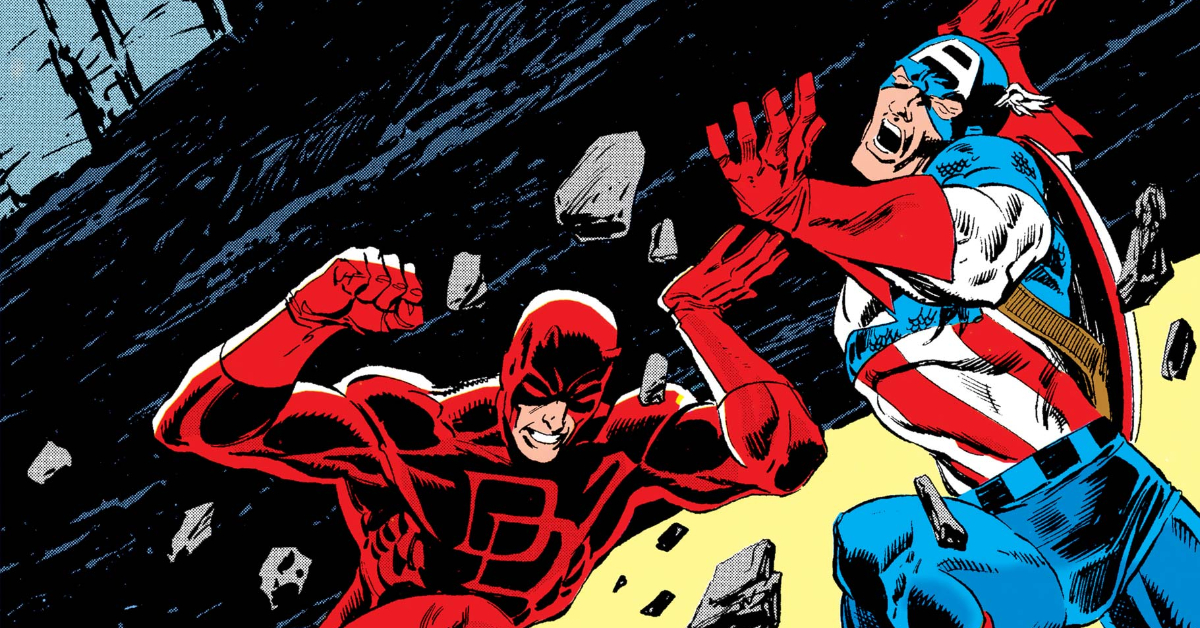 This classic team-up episode hints at danger and suspense from the front cover onwards. While Daredevil is going slightly off-the-rails, disappearing from Hell’s Kitchen to search for crime elsewhere (and possibly a reason to carry on), Cap Am is following some leads and questioning America.

A fitting time for a superhero who embodies the American spirit to ask questions of himself – the year had been tumultuous at best. The handling of Noriega in Panama, the situation in the fast collapsing Soviet Union, and the heated war in the Gulf meant that a lot of young people were demanding Is the USA setting a good example? Captain America asks those questions, and looks for answers.

A migrant seeking the American Dream is demonstrating his new invention – one that may make  the world a better place. What could go wrong? If even the poster-boy for the USA is behind it, and it seems to work, what disaster could possibly befall this benign innovator, one Victor Obszkowska?

For a little context, the previous issue of Daredevil was about working with the Inhumans and the Silver Surfer to escape Hell and try to defeat one of its mightiest denizens – for the sake of not spoiling anything, I am not going to tell you which terrifying, ultra-evil character it is, but you’ll  know them well.

The artwork from Mark Bagley is as clean and crisp as ever. The use of wrinkles, stubble and tiredness in the eyes of the main characters is particularly expressive of how their lives are changing as the story unfolds. Some of the distance shots of crowds are a little simplistic, but even with a few strokes of a pencil, the intent of an artist like Mark Bagley shows clearly.

The story is not exactly subtle in its message. I’m fairly leftist, but there are times when storytelling becomes heavy-handed when loaded down with a message like: Let’s try to be less selfish. The theme, all the way through, is that America is greedy, corrupt, and big business rules. Admittedly, at this time in world history more than any other in the last 50 years, it would have been hard to deny the point they are making, but it is sometimes a good idea to use a lighter handed approach.

Overall, a good story with some actual depth, and a decent helping of Biff! and Kapow! Daredevil fanatics will probably be unsurprised at the “morality play” theme of this particular issue, and  there are some great moments where we see the characters protecting something they  genuinely believe in. A great issue to own. Pick up a copy when you can.