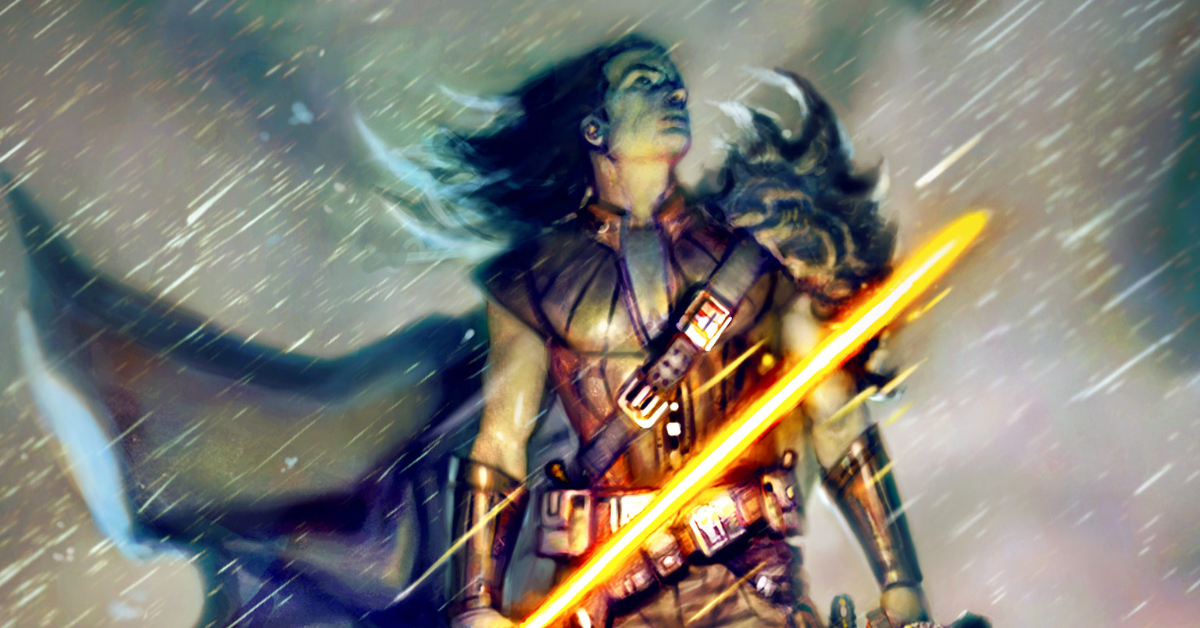 Star Wars: The High Republic – Eye of the Storm #1

This new title releases as part of the ‘High Republic’ multimedia Star Wars storytelling event, ongoing since late 2020, involving short stories, novels and comics. The High Republic refers to a time before the fall of the Jedi and the events of the prequel films. It’s an era full of mystery and, until recently, has been largely unexplored. Here we have a comic with a premium presentation; uninterrupted by adverts and every page printed to a high standard.

Such high standards are exemplified by the dramatic, atmospheric cover by Ryan Brown. He depicts the Eye of the Storm as character, weather event and metaphysical concept all at once, something which takes on great importance in the book. It’s a clever cover, beautifully painted, which possibly hints at a future event, or at least one character’s vision of a possible future. Plus it has a lightsaber in a cool colour, so it gets my vote.

The issue is titled ‘Act 1: Ro’, and is presented in 3 scenes, each with its own title. It’s grand stuff and is very much befitting the epic scale of the story Charles Soule is weaving here. Scene 1, ‘The Truth’ brings us an encapsulated history of the Evereni, inhabitants of the planet Everon. Their path to the stars was a dark and troubled one, their plight shaping their collective psyche while also sowing the seeds of future events…

In Scene 2, ‘The Lie’, we find ourselves joining a family of Evereni aboard their ship, the Gaze Electric. We’re granted more of an insight into their way of life and the power they wield, both as individuals and also in the shape of the hyperspace savant, Mari San Tekka. This is to say nothing of the Nihil, a band of fearsome pirates led by the Evereni. Things are moving quickly, in more ways than one, and by the close of this scene, the growing threat to the Republic and the Jedi looms nearer.

The final scene is title ‘The Kill’, and serves to show us more of Marchion Ro and who he is to be through both stark, matter-of-fact scenes and through prophetic visions. Here is the character who, on the opening page of this book, says there is good reason to fear him.

Charles Soule somehow fits an awful lot into this book and has the last page deliver on the promise of the first page in spectacular fashion. Presenting the book in scenes lends further to the feel of a tragic play, unfolding on a grand, galactic stage. No panel or line of dialogue or narration is wasted here. We witness the fall of a race and their later descent into Machiavellian power struggles, we see the formative moments of a pivotal character, and we glimpse a dark future; one that will affect the Republic and Jedi alike.

The art is just as much of a treat as the words in this title, moving from moments of still austerity to dynamic, cinematic action. The Nihil are darkly strange, just as a band of pirates at the edge of a galaxy should be. The ships are sleek and cool while the Everni’s plight is writ clear on their features, as are their later moments of cold disconnect and fierce scheming. There are a lot of cool designs and interesting new (to me, at least) characters to enjoy here, and it truly feels like a previously undiscovered part of the Star Wars universe. It’s dark in tone, necessarily so, but it’s a wholly engaging read and one that makes me wish I’d had more exposure to the High Republic material before now. This is the sort of thing I’ve always loved and craved from Star Wars since I was a kid: the feeling of finding secret knowledge about characters, planets or some other aspect of the stories. To have questions like ‘who are they?’, ‘where did they come from?’ or ‘why are they like that?’ answered in such a great comic is very, very cool.

This premier issue of ‘Eye of the Storm’ really impresses and is hugely fun to read. I found myself revisiting both the art and writing soon after I had finished reading through the first time. It’s an origin story with a difference and comes recommended for anyone looking to try out the High Republic side of Star Wars or indeed any Star Wars fan. It has starships, aliens, lightsabers and adventure, so take a look! The Force is strong with this one…