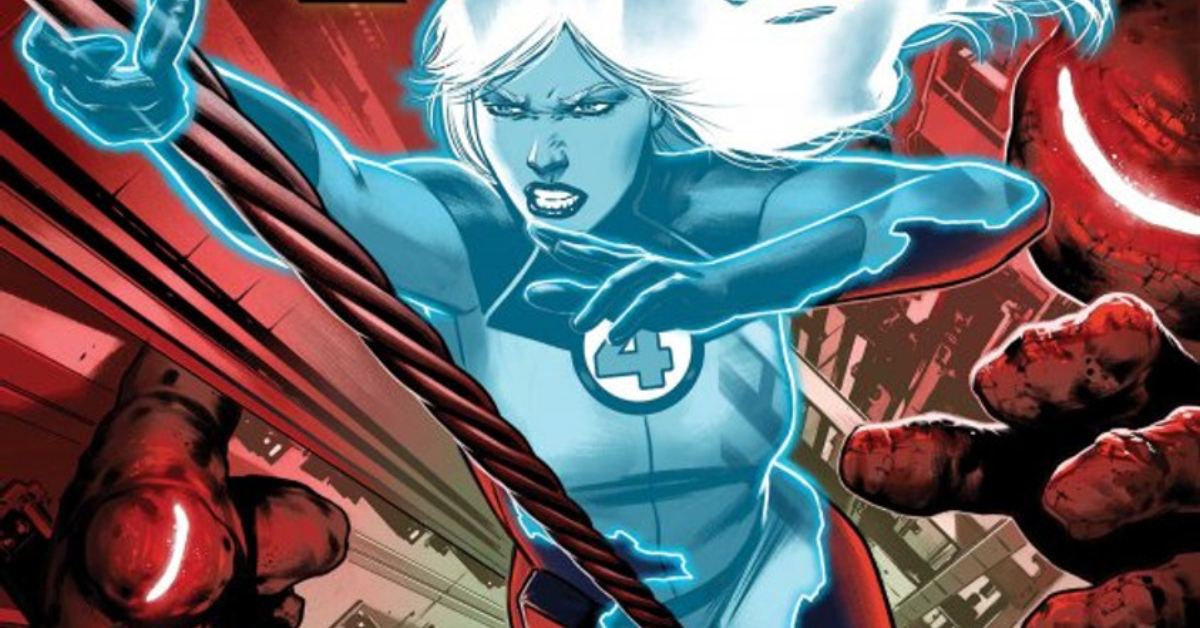 We’re in classic base under siege territory for the latest issue of Fantastic Four by new writer David Pepose. The Taking of Baxter 1-2-3-4, part one, wears its influences proudly on its sleeve.

Our Hero trapped inside their own Baxter Building, cut off from friends and family. Facing off against a gang of villain capitalists intent on breaking into the vaults. All without wearing shoes? If you’re getting Die-Hard vibes from that set-up then you’re bang on the money.

But wait. Our Hero? This is the Fantastic Four. There are usually one, two, three, four of them. Well, yes, they’re all here, more or less, but this is primarily a Susan Storm Richards show. She’s riding solo on the front cover, dangling down a lift shaft with an angry look on her face. She is John McClaine.

But before we get to the action, this tale doesn’t exist in a vacuum. It takes place during the current crossover event, A.X.E Judgement Day, to give its full title. If you’re not up to speed with the ins and outs of the event, writer Pepose, tells you all you need to know by the end of page one.

Expo complete, we learn that Reed Richards has locked himself away in isolation for eight hours to have a good long think about how to solve the ongoing crisis. Presumably this story is set in break between the crossover’s on-going action. Whatever the continuity, that’s Reed Richards out of the picture and one of the four out of the way.

That said he’s still ever present in the narration. Thinking the big questions – family, love and commitment, which provides a nice juxtaposition to the upcoming action.

And so, to the action. After a slow build, things really kick off once the villain, evil CEO and fetish queen, Oubliette makes her move.

Using Judgement Day as a useful distraction, Oubliette hacks into the Baxter Building’s security while everyone is looking the other way. Sealing it off from the outside world and turning the friendly robot drones, (here to help) into bad robot drones, (here to shoot lasers at you). The Thing and Human Torch are quickly out of the fight leaving the Invisible Woman as the last woman standing.

Sue’s force fields are perhaps the most inventive of the FFs powers but they often lose out to the more dynamic and visually exciting flame-ons and clobbering times of her team-mates. It’s refreshing to see her take centre stage and even more refreshing to see just how effortless she makes saving the day look. There’s no anxiety or second guessing, she’s just fantastic at her job.

Artist Juann Cabal crafts an exhilarating rescue scene across three pages in which we see the full range of Sue’s formidable force field powers. She hopscotches through the air on invisible platforms, hot wires a security drone, catches a friend with a daring high dive and finishes up by smashing the hell out of a collapsing lift that’s about to land on them.

Then there’s the heavily armed mercenaries to deal with. No sweat. No oxygen either once she’s wrapped a force-field around their heads. Easy work.

Sandwiched between the end of Dan Slott’s fan favourite run on the title and the relaunch next month, David Pepose has license to have some fun and he does just that. The Die-Hard references are pleasing, the story-telling is fast and even the Fantastic Four’s trade-marked heart and soul is well handled and put to good use in service of the story.

A good comic yarn with plenty of action and a great solo show for Susan Storm Richards. Looking forward to Die Hard 2 next issue.

VOTE IN THIS MONTHS HALL OF WOW AND WIN COMICS!