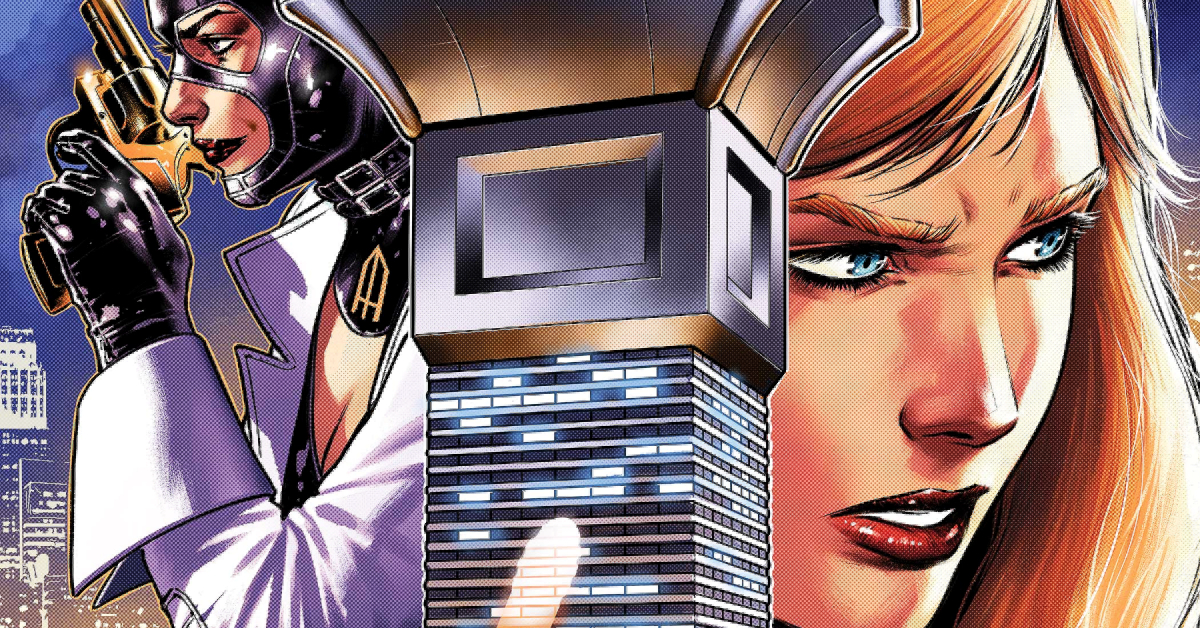 Welcome to part two of The Taking of Baxter 1-2-3-4. The Fantastic Four are facing a hostile takeover from the that rival family firm The Midas Corporation under the despotic direction of new CEO Oubliette Midas. She’s carrying on her old dad’s legacy to “Ruthlessly expand his Empire in the name of forbidden science and eternal profit.” To that end, she wants to tap the genius of Reed Richards by stealing his brain. It’s a bold plan, executed with style and panache and part one’s cliff-hanger would give any Midas share-holders good cause for optimism.

But the fly in the ointment is Susan Storm. After early successes against The Thing and The Human Torch, Midas failed to lock down the Invisible Woman. This was a snag to be sure as Susan was more badass than expected and now there’s a Susan Storm coming to re-negotiate the terms of the takeover. Time to sell sell Midas and buy buy FF? Read on investors.

Last issue robots and mercs didn’t cut the mustard against the awesomeness that is the Invisible Woman, so this round Midas is upping the threat. She’s got a a hybrid space assassin as chief henchman and he’s armed with a hissing acid tongue and a wicked arsenal of pocket battlefields. Pocket battlefields? That’s just the sort of bonkers idea that makes me love comics and wins the award for the best line of dialogue for this month.

“No—that’s impossible! Nothing can escape a Kree pocket battlefield!”

Love it. Surely that’s the sort of line all comic writers got into the biz for?

Juann Cabal is having just as much fun with this art. He switches from the simple to the psychedelic with ease and he’s suitably aided by the glorious colours of Jesus Arburtov. In fact, the whole comic looks amazing and is presented with style. From the inventive panel layouts capturing the frenetic fight scenes to the suffocating close ups of Ben Grimm, buried alive and running out of strength.

With Sue centre stage, Ben and Johnny both get their moments in a pair of excellent subplots. Johnny, trapped on the outside is played mostly for laughs as he juggles malfunctioning hot-rods and rapidly cooling pizzas. Meanwhile Ben’s is a different mood completely. He’s a man fearing the end and using his last moments to pray for his family. Heart-breaking stuff. Both scenes succeed and make for a much richer story.

And finally, there’s Reed. He’s still locked away in a thought bubble so he can think of a solution to the Judgement Day event that’s going on outside, in which a giant super-powerful space God is wielding the thumb of judgement on all marvel-kind. (Don’t be thumbs down.)

I’m never sure about Tie-in issues. At best they can provide a bit of space and character that the main event hasn’t got time for but at worst they seem just a cash in, impossible to follow and a hindrance to the title’s ongoing storyline. To be fair, writer David Pepose makes this one of the former. While the spotlight is deservedly on Sue, Reed’s narration is every bit as important. It’s the spine of the story. Judgement Day forces Reed to pause and focus on where he wants to be and more importantly who he wants to be with if this is going to be his last day on Earth. It gives, Reed, the chance to put aside Mr Fantastic for a while and be more human.

Lastly a note on the ending between Midas and Sue. No specifics but I though it was nicely done. Amongst all the bonkers sci-fi madness it was nice to see some serious issues raised and handled so well. Well done.

A great Sue Storm story and the rest of the team don’t do so bad either. A beautifully written and beautifully drawn story to end this volume of fantastic adventures. On to the next one.