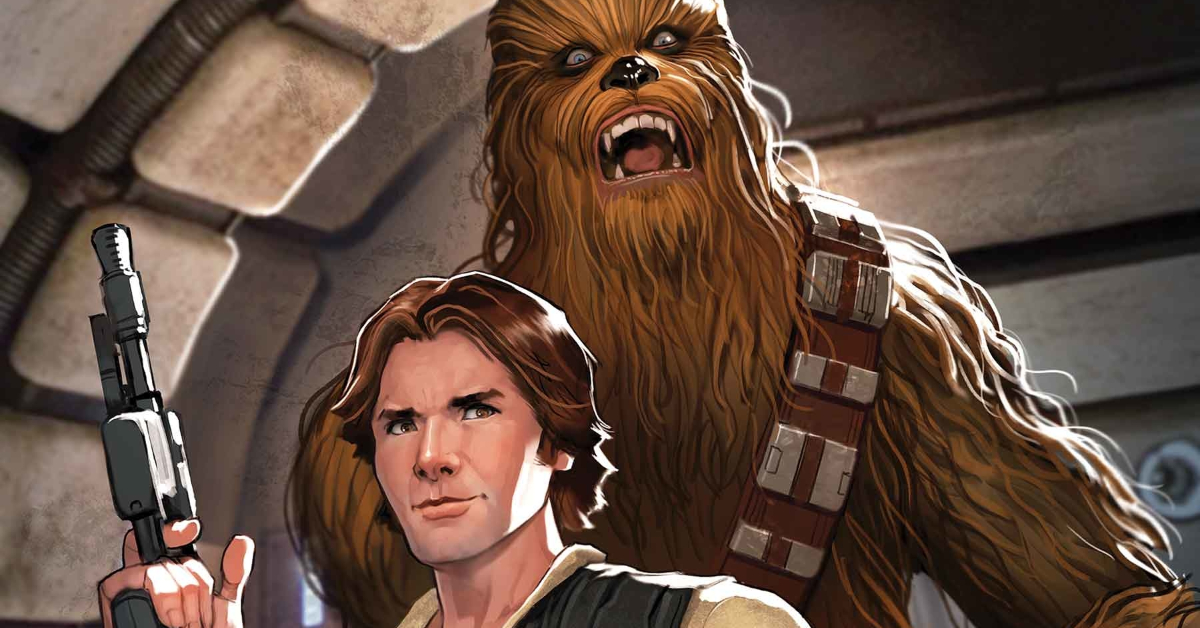 Han Solo and his Wookie companion have always been the heroes of the Rebellion most associated with the underbelly of the Star Wars galaxy. After all, we were first introduced to them in that now (in)famous ‘wretched hive of scum and villainy’, Mos Eisley. In the depths of the Cantina, no less. This, paired with the more recent depiction of the duo’s first fateful meeting in ‘Solo’, should ensure that no-one is too shocked to see Chewie behind bars.

That he’s locked up in the same hole as Doctor Evazan and Ponda Baba is the worrying part; remember their whole ‘he doesn’t like you very much’ encounter with a young Luke in that same Mos Eisley cantina? No wonder our Wookie friend seems agitated, flanked by hardened criminals who have ‘the death sentence in twelve systems’. The cover for issue 6, ‘Dead or Alive, part 1’ is an eye catching one, for sure.

As the opening crawl on the title page indicates, Chewbacca is not only incarcerated, he has lost the Millennium Falcon, along with its cargo (bound for the crime lord Jabba the Hutt) and, to make matters even worse, Han Solo is seemingly dead.

We open on the Prison Planet of Gulhadar and we’re straight into some fighting, as Chewbacca faces down a huge foe in a prison brawl. The brute seems an equal for the Wookie’s strength, too! Chewie soon has help, not only in the form of encouragement from Maz Kanata but also in a more direct fashion from fellow inmate, Phaedra. It emerges she not only has a rap sheet as long as her arm but a plan for escape as well.

Meanwhile, Khel Tanna (another ‘scoundrel’ in the employ of Jabba) and her crew are trying to recover the Falcon from an Imperial impound facility on the planet Iakar. Chaos ensues and soon we are seeing more prison brawls, a less-than-smooth star ship heist and even a scene where we find out one reason why Doctor Evazan and Ponda Baba have such a gruesome reputation…

This issue of the Han and Chewie story features good helpings of signature Star Wars elements, with not one but two Corellian light freighters, weird and wonderful aliens, Stormtroopers and plenty of action, both planet-side and in space. The story moves at a fair pace and packs a lot in to the pages. Even if you’re a new reader, the opening crawl and some hints and exposition mean you’re soon all caught up.

Chewie is as loveable as ever and works really well as the protagonist, supported to great effect by a rogue’s gallery of characters, including Greedo and the diminutive and mysterious Maz Kanata. By the time we reach the book’s closing scene, we’re left wanting to know what happens next; always a good thing in comics.

While the feel of the story is in some ways reminiscent of the very early Marvel Star Wars comics that followed the escapades of Han and Chewie, the presentation of the comic has a modern vibe, with line work and colours that are bold and clean. The art is really nice here, with every character, alien and ship instantly recognisable and each scene shift given its own mood. This is reflected in the writing, which is well paced and gives distinct voices to the cast. I found myself drawn into the story, despite dropping in ‘cold’ and was soon immersed in the worlds and people within.

Verdict: While this issue really only features half of its title characters, it’s a fun read, full of Star Wars familiar faces, iconic ships and fast paced action. Chewie might demonstrate why you should always let the wookie win but things are never gruesome. There’s a lot to like here for fans of all ages. I’m looking forward to what comes next. Punch it, Chewie!