A bumper birthday issue that marks the 45th anniversary of Britain’s preeminent science fiction and fantasy comic. Simultaneously looking back on past glories and ahead to the future, this issue has a particularly strong resonance as it commemorates the death of Ian Kennedy, who sadly passed away on 7th February.

Kennedy’s artwork appeared in British comics for decades, including Bunty, Hotspur and Rover. For fans of British action-adventure comics, however, he will be best remembered as the artist behind the stunningly drawn aircraft, both real and imagined, that graced the pages of Commando, Starlord and, of course, 2000AD.

This issue features two new stories, the first being the John Wagner scripted ‘The Citadel,’ a Judge Dredd story that sees an inmate facing execution reveal a secret about Dredd that hints at corruption. What that secret is exactly, we’ll have to wait to find out. Great art by Dan Cornwell brings to mind the simply effective facial expressions that Steve Dillon draws so well. The second new story is ‘Brink: Mercury Retrograde’ by the supremely talented writer and artist team of Dan Abnett and I.N.J. Culbard. Set four years after the final evacuation of Earth and opening with a triple homicide, the action slows to focus attention on investigating journalists Nolan Maslow and his wife Lauren Steers Maslow. The dialogue between the two captures perfectly their respect for one another, making them instantly likable and relatable so that when they get in too deep with their investigation into unions and sects (which, inevitably, they surely will), we’ll be right beside them.

Three of the continuing stories are all well on their way: Mike Carroll’s ‘Proteus Vex: Desire Paths’ and Kek-W’s The Order: Fantastic Voyage’ are both at part nine, and ‘Kingmaker: Falls the Shadow’ by Ian Edginton is at part seven. As a reviewer, I’m arriving late to the party on these stories, but what immediately struck me is how easy it is to differentiate each of the five-page parts from one another. This is down to the stunning artwork by Jake Lynch (Proteus Vex), Leigh Gallagher (Kingmaker), and John Burns (The Order), each as unique as the stories they’re illustrating. The full colour format of 2000AD — with the exception of Tharg the Mighty’s wonderful throwback story ‘Stars on 45’ (more on that later) – allows for the stories to have their own clearly defined segment within the pages, particularly in the Indigo Prime one-shot ‘Whatever Happened to Mickey Challis?’ (the longest story here); Lee Carter’s artwork is awash in Matrix-like greens and fleshy alien purple tones. It’s a cracking story too.

The Proteus Vex story seemed to stand out especially. Reading this chapter, I can see it’s something special; very weird sci-fi, with a depth of imagination that brings to mind Mike Mignola’s work on Hellboy but leaning towards space opera. Stunning line work and colouring by Jake Lynch and Jim Boswell, respectively. The five pages here are coloured in deep oranges as High Commissioner Shrokulin finds himself in the unenviable position of meeting with Tsellest to deliver the news that there are hundreds more races hidden from his clutches. The meeting, as if it needs pointing out, does not go well! I’ll be reading back issues to bring myself up to speed.

This being a 45th anniversary issue, it would have been a crime of Mega City One proportions not to include Tharg’s input beyond his usual welcoming editorial. Written by David Barnett, ‘Stars on 45’ brings together some of 2000AD’s most famous characters to help Tharg cobble together a song to mark the magazine’s birthday. It’s great fun, referencing Red Dwarf, Back to the Future, and above all else, Bill and Ted’s Excellent Adventure, as Tharg’s droids Larr-E, Kirl-E and M-O travel across the Thrillverse to kidnap Rogue Trooper, Judge Dredd, Judge Anderson (“She didn’t see that coming!”), Zenith, Ace Trucking Co., and Bad Company.

As well as marveling at the breadth of SF and science fantasy that has been a staple of 2000AD over the years, one of the many pleasures to be had is enjoying the humour. Always paying the utmost respect to the SF genre, with stories veering effortlessly from one sub-genre to the next, there’s always been a delightful knowingness and very British outlook on the societal and political shifts that have taken place over the past 45 years. Remember Strontium Dog kidnapping Ronald Reagan? Alan Moore’s works dripping with anti-Thatcherism acid and anarchy via D.R. & Quinch? It’s what makes 2000AD such an important comic, and reading this issue, the energy, devotion, imagination and sly humour are all still present and correct.

After a few weeks of moving we have finally left our shop at number 3, The Rock! The doors of our brand new shop on Bury Market are finally opening on Monday morning (7/2/22) 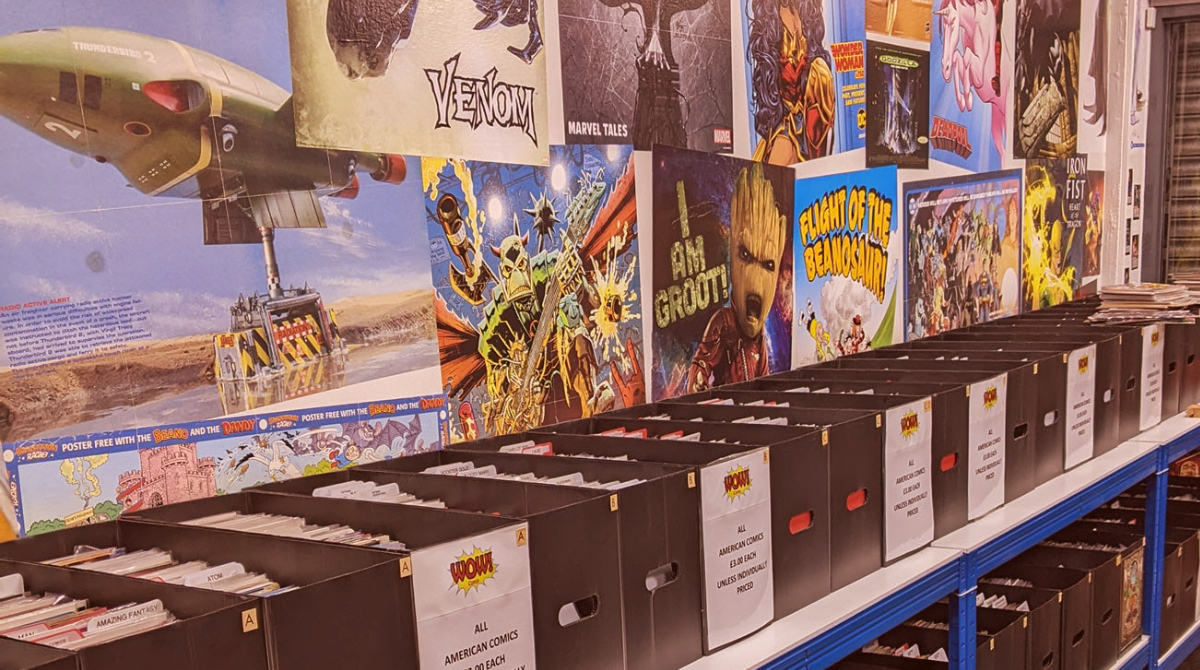 After a few weeks of dismantling, painting, and long box hauling we have finally left our shop at number 3, The Rock! The doors of our brand new shop on Bury Market are finally opening on Monday morning (7/2/22), and the people of Bury shall finally be saved from the tyranny of a local comic book shop-less existence once again!

You will now find us on the corner of Bury Indoor Market (Unit 21) and we will be open for business 9am – 5pm, Monday – Saturday! You can access it by either approaching from the indoor market area entrance within the Millgate, or via our main entrance outside the market hall which faces out across Angouleme Way should you be approaching out of the Millgate Shopping Center via Market Parade (The b&m side..), or from walking around the outdoor section of the market itself. It is also conveniently situated opposite one of the main pedestrian subways that lead into the town center. See the map below for a closer look!

Inside the new store, you will find all of the usual wonders that you might expect from us. So of course that means it’s rammed full of great vintage British and US comics, magazines, annuals, mugs, posters, toys, cards, models, and of course many other collectibles and critical reading material!

If you want to keep up with all the going’s on at Wow Comix Bury, make sure you are following us on its own Facebook page and our Twitter! You can also subscribe to us here on Wow Comix World of course where, alongside our customer-led news and reviews articles, we share all the events, photos, products, and other news and updates from all of our shops!

To our online customers, please be aware that we are not re-instigating the in-store pickup option at this moment in any of the stores. If you have any questions on the matter or anything regarding the new store do feel free to contact us via the contact form on www.wowcomix.com.

The process of leaving 3, The Rock brought back a lot of great memories for us as it’s been such an important part of our company as a whole since we moved there, having held our main office and online department in behind the shop front. Over the last few months, these parts of the business have now been relocated to other premises.

However, with closing the doors on the old shop we don’t find ourselves feeling overly sad to leave, simply because we are super excited to be opening some new doors (literally, it has two entrances!) just a stone’s throw away, and we can’t wait to see what you think of it! It opens at 9am tomorrow and we hope to see many of you there over the days and weeks ahead!