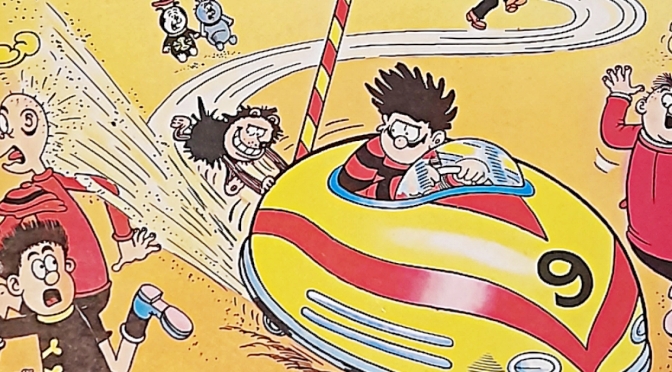 Every comic collector starts somewhere. Mine began in February 1991 when I found a copy of an old Beano annual from 1982 hiding on a shelf at home. No idea why it was there. Neither of my parents have ever been into comics so it remains a mystery. But that moment of discovery has stayed with me. A boring Saturday afternoon was supercharged by the arrival of Dennis the Menace and Mini the Minx. I was nine years old and so were they. We became immediate friends.

I bought my first weekly issue later that week. Number 2537. I’ve had to do some detecting here, as while I still have the fabled comic, the front page has long since been lost. Cover price 26p, a significant dent in my pocket money. I would have to forgo some sweets to afford his habit. That alone proves how much I instantly liked it because up until then nothing excited me more than sweets. It was a big decision, one encouraged by my mum. Anything to reduce my sweet intake. (I would grow hyperactive on too many e-numbers.)

It seems I’d chosen the perfect time to become a Beano fan. Two weeks later Dennis the Menace turned 40 years old and the comic celebrated with a poster magazine and a selection of reprints from throughout Dennis’s Menacing career. I was hooked. Fortunately, there was a glut of Beano products out that year. On top of the weekly, and the yearly annual, there were comic libraries, poster magazines, summer specials, and sticker albums. My pocket money couldn’t cope, so negotiates were opened for a raise. The big wash-up after Sunday lunch became my duty. Every pot and spoon bought more tat and merch. My bedroom turned black and red. Menace colors.

After a year, I branched out. Asterix and Tintin, a few Gerry Anderson revival comics but the Beano remained supreme. Boot sales were a good source of back issues and old annuals. At my peak, I must have had over five hundred comics. My first great comic collection.

Then one day, I saw my first X-men comic. America came muscling in and Dennis and Mini were out, Wolverine and then Batman were in. The Beano’s were swept aside.

And so, it remained. Until 2021 at the height of Covid, when everything was shut and comics were hard to come by, I bought a Beano comic from the supermarket. £2.99 now. Would I have to give up beer to keep up this habit? Fortunately, my washing-up rates have increased enough to cover both, and I was pleasantly surprised to find how much I enjoyed it.

Re-reading some of those old 1991 Beano’s (I kept a few favorites), there’s not much for adult heads to enjoy. Affection and nostalgia aside, Dennis does come across as a bully to modern eyes, and the corporal punishment that ended every miss-adventure was dated even then.

But the modern Beano felt evolved, diverse and I confess, very funny. There are plenty of newer characters, representing modern Britain, and the A-listers, Dennis, Mini, Roger the Dodger and The Bash Street Kids are all still there and on top form. I think part of the reason of the Beano is still going today is down to this core group of characters. They’re all the same age as the target audience in the same way that Desperate Dan from the Dandy is not.

The art is consistently good (we now have writer/art credits) and the writing is often surreal and clever. I also liked the way the characters shared their universe more. They’d all turn up in each other’s stories and occasionally an entire issue would be based on a big shared adventure. Reading this Beano is like joining a cool gang.

Then Covid ended and I had to grow up again but I thoroughly enjoyed my few months with the new Beano. I’m glad it still survives and is in such good hands. And if I’m ever threatened with a boring Saturday afternoon, I know it’s still out there if I need it.

Finally, back to issue 2537. The front cover may be gone but the rest of it remains, a bit tattered and torn but a survivor of countless purges, teenage indifference, and at least six house moves.

“Keep everything,” my dad would say. “You’ll want it when you’re older.” Good advice, and easily ignored. But in this case, I listened. It lives on, boarded and bagged and much loved. The one that started it all.

Don’t miss out on the British Comic Fest in Stockport on Saturday 20th August! FREE ENTRY ALL DAY! 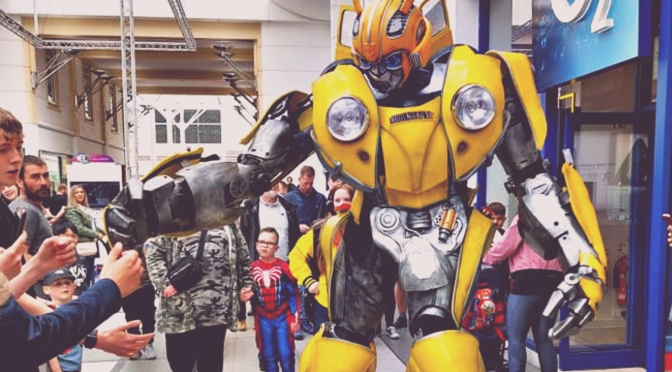 We knew Stockport had its fair share of comic and movie fans but WOW (Cough)! What a day! We all want to say a massive thank you to all of you folk who turned out on Saturday. It’s safe to say that it was one of the most fun days to be around the town center in recent memory for us, and perhaps many other local comic and cosplay enthusiasts! We even heard on the grapevine that over 20,000 people had descended on the town over that day. If that’s true that’s bonkers, but it certainly would be no surprise judging by the size of the crowds.

Of course, a mega-thankyou goes out to Totally Stockport, The staff of the Merseyway, Paul Prescott (Funky Figures and North West Comic Conventions), and our own John Webster (Wow Comix and Wow Events) for the arrangements. But also a big thankyou also to Stockport as a whole! The shops around the town and their staff, the families, the wanderers, the cosplayers, and the vendors. There were cameras out and smiles everywhere. It was just so great to see Stockport town center so vibrant on a bright sunny day, especially after such a polarizing couple of years with Covid. Hey, nobody could complain about the lack of masks on Saturday!

Due to us at Wow Comix working for most of the event, we only got a few snaps overall. If you have any photos, we would love to see them and add them to our blog here if possible! Send them over to us at info@wowcomix.com or DM our socials!

So, here is a small selection of what we imagine will have been thousands of overall photos taken on the day! Let us know if you spot yourself! (Wait, isn’t that the last thing a crowd of masked Superheroes would ever… Oh, never mind!)

Due to us working for most of the event, we only got a few snaps overall. If you have any photos, we would love to see them and add them to our blog here if possible! Send them over to us at info@wowcomix.com or DM our socials!

Thats right folks, we need to make space for some juicy new stock and so what better way to get a move than having a GIANT in-store sale! Over the next couple of weeks in Bury and Stockport you will find loads of marked down items, including rare and vintage comics, books, graphic novels and much more! Don’t underestimate this one, its a BIGGY, and its happening NOW!

Its not worth missing, so make sure you head on over to a Wow Comix store over the coming weeks and take advantage of some ridiculous offers before we come to our senses and change our mind! We have full comic sets knocked down to half price, heavy savings on hardback graphic novels and reductions across all of the back issue comic boxes!

Whats more, anybody making an in-store purchase over £10 will be handed a (super secret) code which will allow them 20% off the website for a limited time! HUZAR!

Get a taste for just a fraction of the items that are on sale below! (These items do not have the sale price in the photos, but fear not they do now!)

Looking for something particular? Let us know!

The latest news and comic reviews from the Wow Comix team.