What’s cute, yellow and since 1996 has become a household name? Why, it’s the one and only Pikachu of course!

What’s cute, yellow and since 1996 has become a household name? Why, it’s the one and only Pikachu of course! Considering how synonymous Pikachu has become with the Pokemon franchise it’s strange to think that our little mousey friend wasn’t originally going to be Pokemon’s mascot, with that particular role originally set to go to Clefairy. This decision however, was changed as it was thought a mascot that would be perceived as gender-neutral in its design would be more equal in appeal to both boys and girls than Clefairy, the pink aesthetic of whom it was considered may be more popular with a female demographic. After taking center stage as Ash/Satoshi’s companion in the Pokemon anime, Pikachu would also become the star of Pokemon Yellow, a revamped version of the original Pokemon Gameboy games which took influence from numerous aspects of the popular anime series. 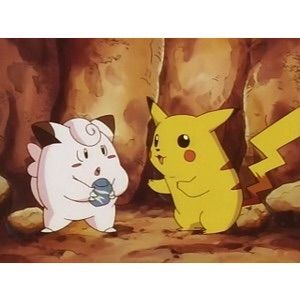 In the past two and a half decades Pikachu has continued to grace both the big and small screen in a variety of different Pokemon-related media. Along with an abundance of Pokemon video games, there have been Pikachu-branded planes, cars and more toys and pieces of collectable Pikachu merchandise than you can shake a Pokeball at. In this blog we will be exploring Pikachu’s impact on the success of Pokemon as a brand by taking a look at a few interesting pieces of vintage Pikachu merchandise from the golden age of Pokemania. 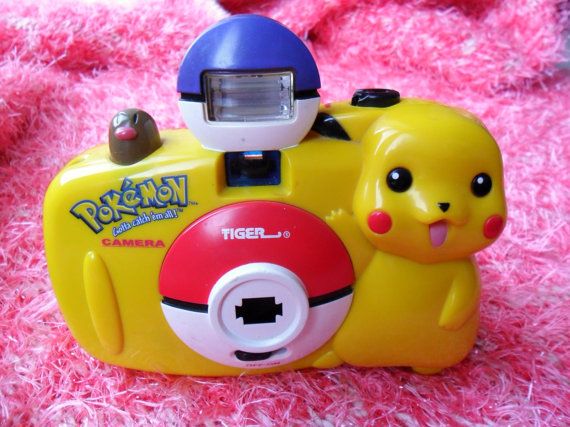 Despite being released on the cusp of the Millennium, here is a quintessentially 90’s piece of Pokemon merchandise if ever there was one. The 1999 Tiger 35mm Pikachu Camera featured a very cute Pikachu/Pokeball design with Diglett also making an appearance as the camera’s shutter button (I suppose out of all the Gen I Pokemon Diglett probably is the most applicable to be used as a button, as I can’t imagine the likes of Cloyster or Starmie would have made for very comfortable use of the camera). Fully functional, the Pikachu Camera came complete with a battery-operated flash and also had the added feature of being able to add a Pokemon-themed vignette frame around photos. 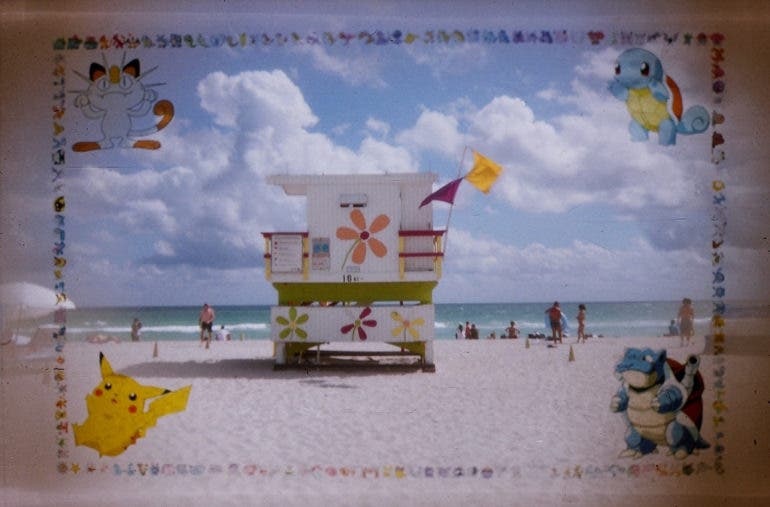 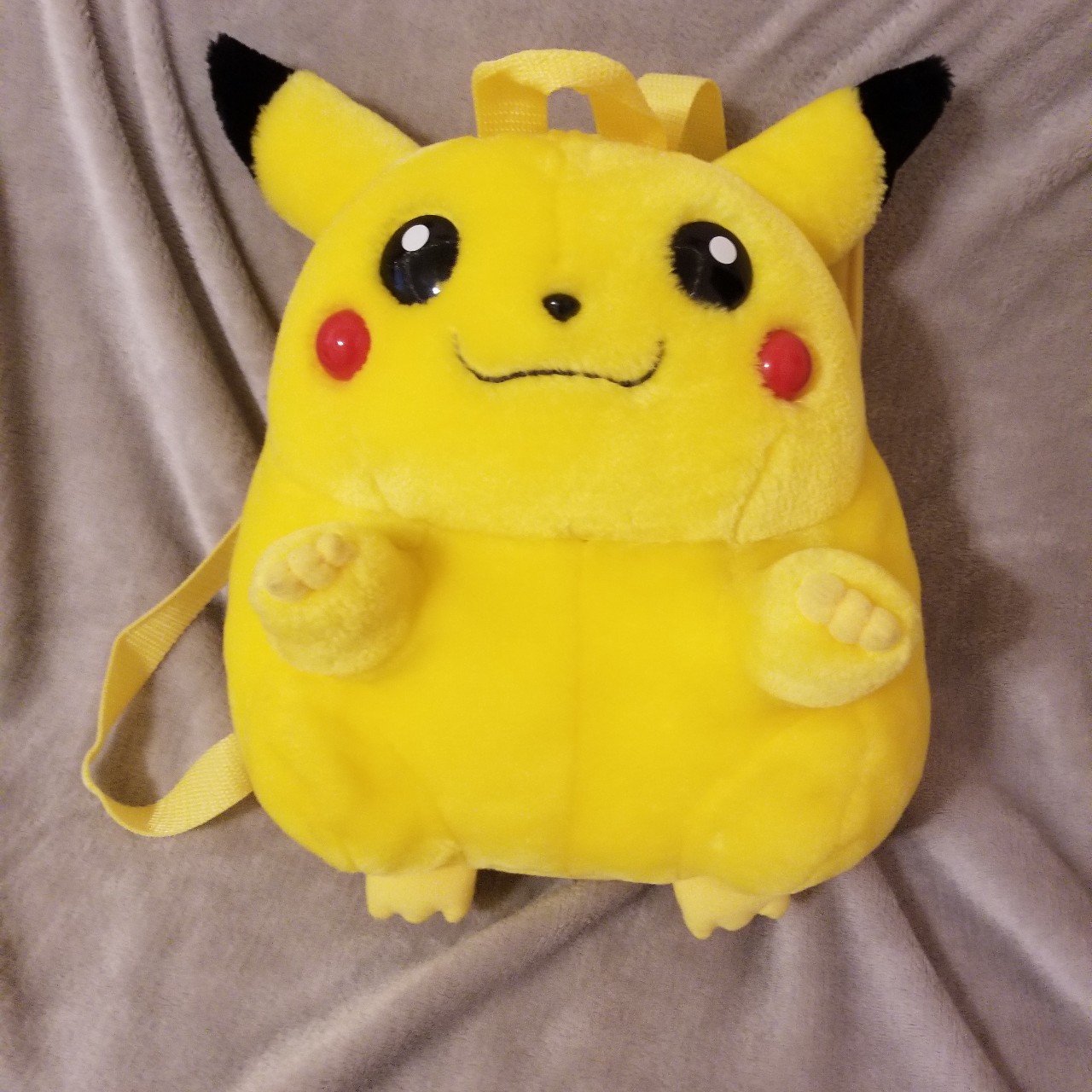 Similar in design to the original “Fat Pikachu” plushies (as featured in my previous blog on vintage Pokemon plushies), the 20″ Pikachu Backpack was a very popular way of carrying your books and P.E kit to school for many kids in the late 1990’s and early 2000’s. With a simple, cute and cuddly design, the Pikachu backpack was also released in a smaller 14″ version and as a 10″ gameboy carry case. 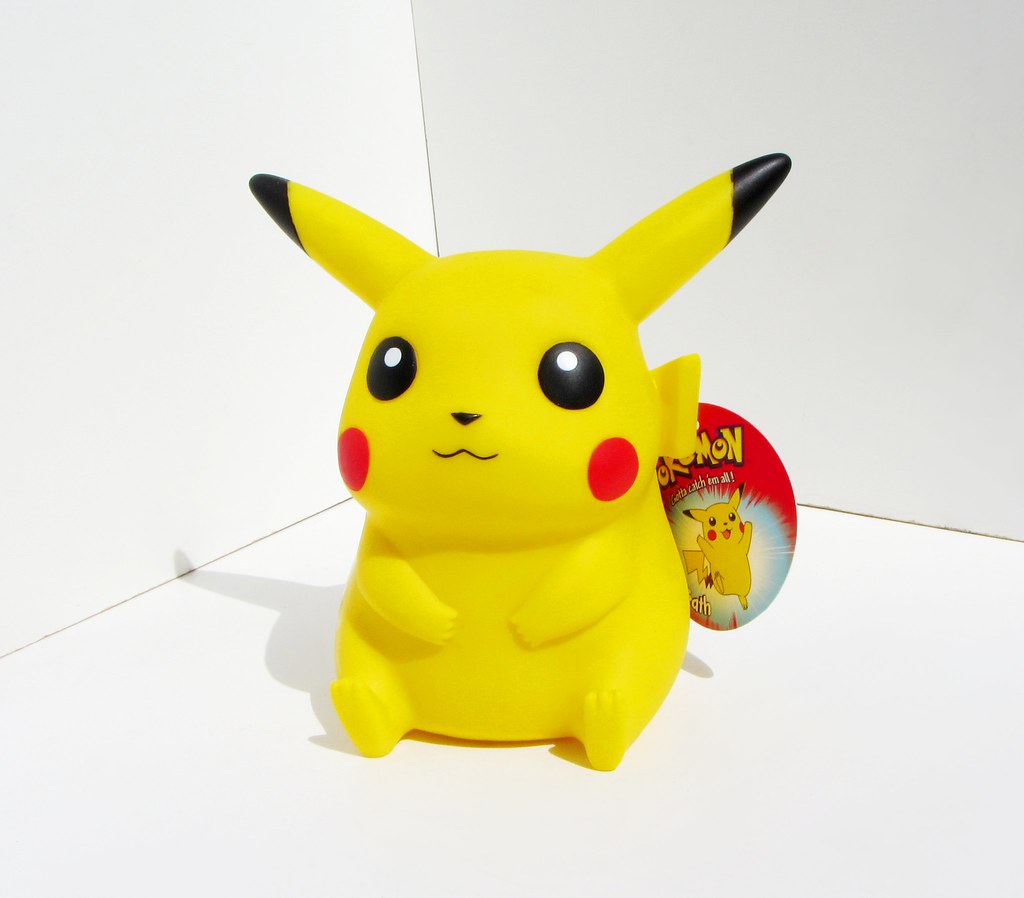 Produced by Grosvenor Consumer Products Ltd, the Pikachu Bubble Bath was a large plastic Pikachu figure with a bottle of child-friendly Bubble Bath fitted inside, which could be accessed via the bottom of the figure. Grosvenor have created a variety of bubble bath figures over the years, including worldwide franchises such as Disney, The Simpsons and Doctor Who, so it was only fitting that a phenomenon as big as Pokemon (and with a mascot as cute as Pikachu) should also join their ranks. Upon the western release of the Pokemon 2000 movie, a second Pokemon Bubble Bath figure was released featuring the film’s star legendary Pokemon, Lugia, alongside Pikachu. 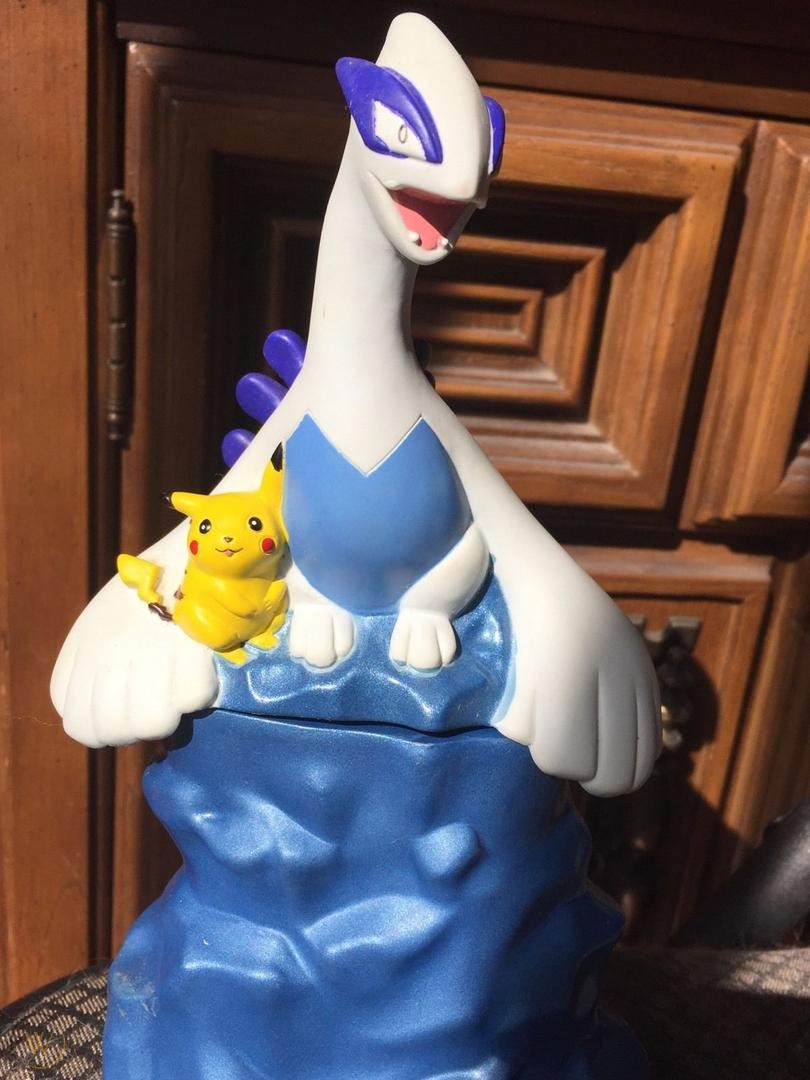 First beginning with the Special Pikachu Edition Gameboy Colour, Nintendo have released a variety of Pokemon-themed consoles over the years including many editions of the Gameboy Advance/SP/Nintendo DS/3DS, a trend that continues today with the recent Pikachu-themed Nintendo Switch accompanying Pokemon Let’s Go Pikachu. The Special Pikachu Edition Gameboy Colour was packaged alongside Pokemon Yellow, which (as mentioned earlier) was an updated version of the original Pokemon games, where the player received a Pikachu as their starter Pokemon which would follow them during their adventures throughout Kanto, in a similar fashion to Ash’s Pikachu in the anime. The console itself featured bright Pikachu-yellow casing, with graphics of Pikachu and fellow fan favourites from the anime Jigglypuff and Togepi greeting the player alongside the screen. 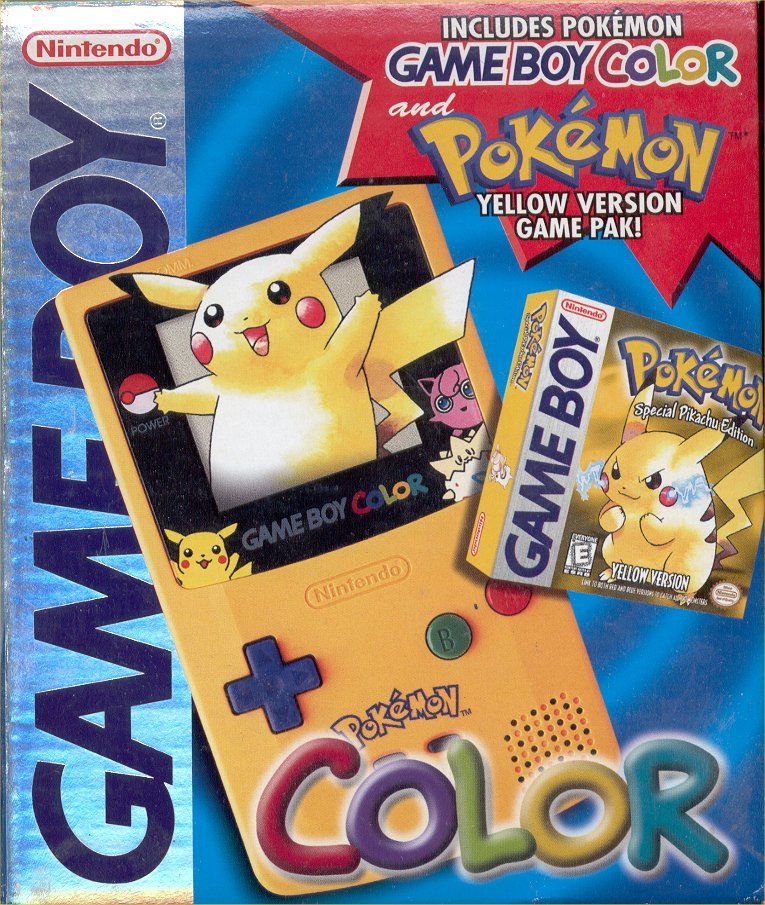 In 2001, following the release of the second generation of Pokemon games, another Pikachu-themed Gameboy colour was made available. This console was produced in two different colours, yellow (the same bright yellow casing that was used on the previous Pikachu gameboy) and gold, with the border of the screen featuring Pikachu and his newly-introduced pre-evolution Pichu, one of the new baby Pokemon that made their debut in Pokemon Gold and Silver. 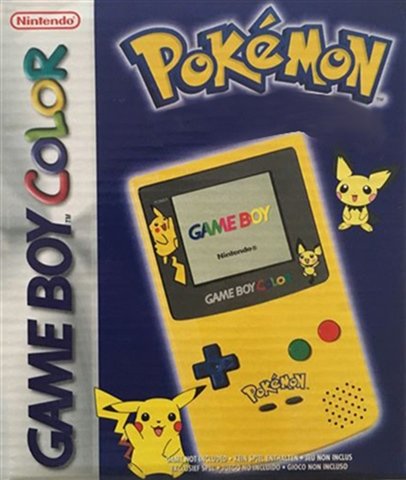 Prior to the release of the second Pikachu-themed Gameboy however, Nintendo’s first Pokemon-themed home console found its way into the hands of gamers upon the release of the Pikachu Nintendo 64 in 2000. Featuring a large plastic Pikachu on top of the console and a Pokeball as the power switch, a variety of different versions of the console were made available in various territories across the globe. The standard version featured solely the console and a Pokemon-branded controller, whereas Toys R Us shoppers in the USA were treated to an exclusive version packaged with a pocket watch and the game Hey You, Pikachu!

Over in Australia, an edition known as the Pokemaniac Nintendo 64 was packaged with a VHS copy of Pokemon – I Choose You!, the first volume in the initial series of Pokemon anime VHS releases. Japan received an exclusive orange version of the console, which has since become much sought after amongst collectors. 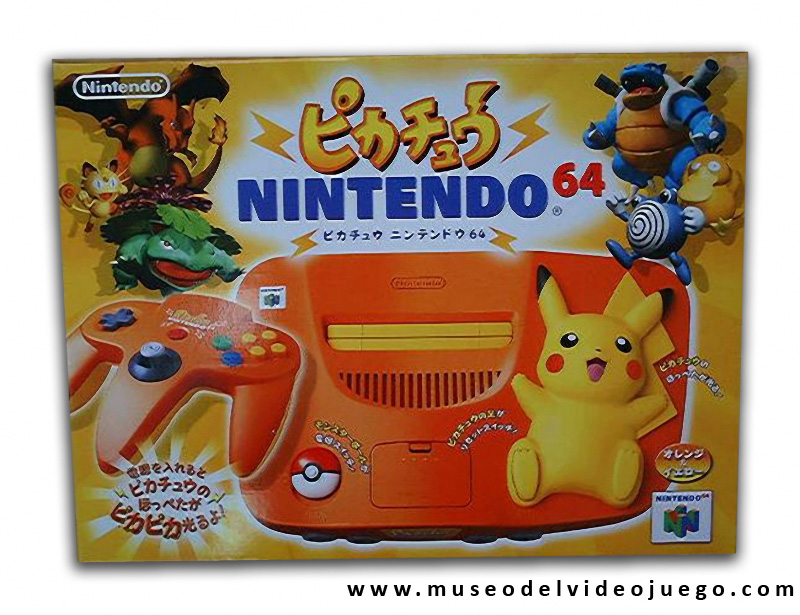 In 2000 Tiger produced a Pikachu-themed radio control car, which was likely influenced (though this remains to be officially confirmed) by the Pika-Bug cars, a small fleet of Volkswagen Beetles with Pikachu-style aesthetics which had been used to promote Pokemon across the United States of America from 1998 up until the mid 2000’s. 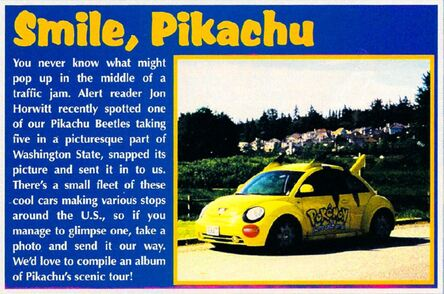 The Pikachu Radio Control Car was operated via a Pokeball-shaped remote which connected with the car through the use of radio frequency. The remote allowed the driver to change direction as they pleased by using the two joysticks that were found upon opening the Pokeball remote. 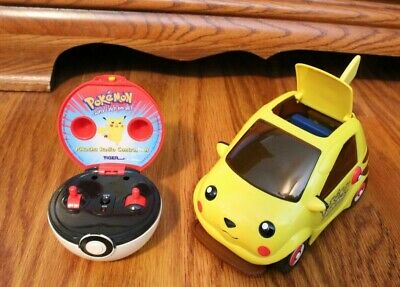 Originally released in 1998, the Pokemon Pikachu (also known under the name Pocket Pikachu in Japan) was a Tamagotchi-style digital pet that functioned as a pedometer. Instead of requiring users to feed/clean the Pikachu as many other digital pets of the same era did, the user’s relationship with their Pikachu grew stronger by increasing their number of steps when wearing the Pokemon Pikachu. Every twenty steps would be converted into a digital currency within the device known as Watts, which could then be used to buy presents for Pikachu and thus improving the users standing with their new digital friend. 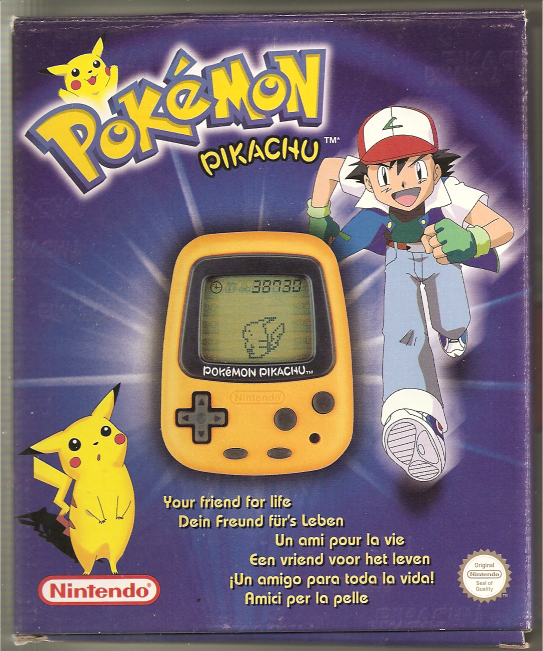 The first version of the device featured yellow casing similar to that used on the Special Pikachu Edition Gameboy Colour, with black and white display graphics that would show Pikachu’s interactions with the user. Different animations would become accessible upon gaining specific amounts of Watts, depicting Pikachu eating, showering and watching TV amongst a number of other activities. If the user did not interact with Pikachu for a prolonged period of time, the Pikachu within the device would get angry with the player upon the Pokemon Pikachu eventually being turned on, even running away if the player’s absence went on for too long (Pikachu going AWOL wasn’t permanent however, as he could be called back by shaking the device). 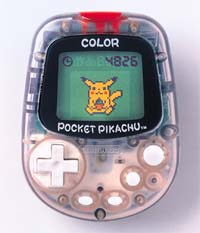 A new version of the device, the Pokemon Pikachu 2 GS, was released alongside the second generation of Pokemon Games, however this time around the player didn’t have to take care of Pikachu and the watts gained through use of the pedometer could be exchanged for items in-game. 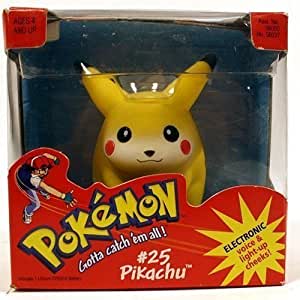 Last but certainly not least, my last addition to this blog list is Hasbro’s 1998 Electronic Pokemon Pikachu. Although there have been a variety of electronic Pikachu-themed toys released by a variety of different manufacturers since Pokemania first hit the world, this one is particularly special to me as (along with the electric Charmander toy from the same range) it was the first piece of Pokemon merchandise I ever got. With light-up cheeks and Pikachu-voice sound effects, this toy is also quite notable in aesthetic terms for featuring Pikachu with a semi-white face and a much shorter and rounder body than would be seen in later toys, both aspects of Pikachu’s early design which were dropped as the franchise became more widespread and the overall appearance of individual Pokemon became more consistent with how they appeared in the anime series as opposed to their designs in Ken Sugimori’s original artwork.

Of course, as stated earlier this blog only features a miniscule example of the amount of Pikachu merchandise that is in existence, as after over 25 years of success the Pokemon franchise has put their mascot’s face on an impossibly large amount of products, each as cute as the last (though the recent and rather terrifying Pikachu-centipede style plushie might be a slight exception…). As new incarnations of video games, toys, trading cards and anime continue to introduce new fans to Pokemon, our little electric mouse friend has become a pop culture juggernaut, instantly recognisable to people of all ages. As the world of Pokemon has continued to keep up with changes in trends and technology, Pikachu has stayed in his rightful place at the centre of the franchise and I hope he continues to for many more years to come.

The Toy Report – A Brief History Of Pokemon Toys:

The Phoblographer – This Pokemon Camera Will Make Your Inner 90’s Kid Swoon: